How Can Women Protect Themselves From Being "Slut-Shamed"? 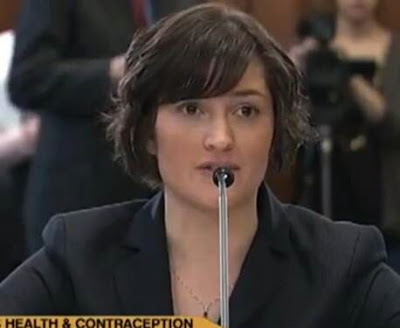 Even Sandra Fluke, a literal heroine for the rights of American women in 2012, was slut-shamed for vigorously defending accessibility to contraception via the Affordable Care Act.

The recent case of Kentucky Wildcats' fan (and actress)  Ashley Judd tweeting her opinion about an opponent  team's cheating almost instantly brought the wrath of the alpha male trolls onto her head. In response, in  tweet after tweet these scurrilous vermin hurled sexually violent epithets as well as  physical threats at her. Similar attacks on HBO Girls' star Lena Dunham forced her to take one of the most extreme steps imaginable in the age of social media frenzy: cut off her Twitter feed.

This was indeed, drastic, but for high profile women in the media it may be the only way to secure their character from attacks by internet trolls, who appear to have had a population explosion in recent years. We have also learned from various studies that women online, and especially using social media (Facebook, Twitter) are nearly four times more likely to be attacked than males. The reasons for this are still being debated and examined but one of them is surely based in not yet extending equal rights to women via the Equal Rights Amendment.  Another small part may be, as my wife put it - that women in general are the more genteel sex, and disdain conflict - whereas many males relish it - especially verbal combat. Hence, trolls more often go after the less "combative" types.

Whatever the reason, slut -shaming attacks and general vile misbehavior towards women isn't confined merely to those like Lena Dunham who have high profile TV shows - which also feature a lot of sexy scenes.  For example, we have seen the case of women's reproductive rights defender and spokesperson Sandra Fluke -who was mercilessly attacked by the likes of Rush Limbaugh back in 2012.

Ms. Fluke delivered courageous testimony on the need for contraceptive inclusion in the ACA and her words were promptly twisted by Limbaugh (and other Reich renegades, mainly at FOX) to convey the asinine notion she was pleading for sexual libertinism. Much the same happens to other women day to day who blog about similar issues, for example, or express their thoughts on Twitter or Facebook. (Tracy Clark-Flory comes to mind, and she also writes for salon.com)

Then there is the execrable, actual debasement and exploitation of young women, especially on our college campuses. We already have seen the horrendous rape statistics, and they apply across the board  - to the Ivies, as well as state universities.  But the maltreatment of women extends to college fraternities as well.

In the most recent case, the degenerates based at Penn State's Kappa Delta Rho fraternity created a special secret FB page on which they posted images of women passed out and nude at their frat house, and made it accessible to current and former members. No consent from the women was given, so it is clear that laws definitely were broken and restitution of some form needs to be made. Meanwhile, the national office has suspended the Penn State chapter for a year. We still don't know what the university itself will do but they ought to at least consider what happened to Sigma Alpha Epsilon at OU when that racist rant was shown.

Incredibly, assorted Neanderthals - excuse me - apes, have actually tried to justify or at least diminish the behavior. In the OU case, we were expected to believe the little miscreants simply went slightly ape shit after consuming "too much" alcohol. So, I guess their inner apes got control of their brains. In this case the excuse is made based on excess alcohol, or the inner ape being released under its influence. Under no circumstances were the little dears actual racists. God forbid! In their non-intoxicated state these punks were really 'salt of the earth', prejudice-free citizens.

"The fire of indignant, misplaced self-righteousness that looks to ruin people's lives and unjustly ruin reputations is the abuse and violation that should be at the center of discussion, not the humorous, albeit possibly misguided antics of a bunch of college kids."

WTF?! Trying to turn the transgression back on those who exposed it? So let me get this straight, these bozos posted nude images of passed out females without their consent - for the consumption and gratification of their mates - and it is the women's fault for trying to get justice?  Are you kidding me?

These characters really believe it is the women and their defenders trying to "ruin people's lives and reputations" when it is the frat turkeys themselves who have done it by their actions. Of course it is their doing and that is the meaning of personal responsibility. It is exactly parallel to what happens now when a person poses themselves in compromising ways on Facebook, then wonders why s/he was rejected for a job, position,  because an employer found her FB content.

The kid who wrote the WaPo response can bellyache all he wants but in the end what these guys did was not "misguided antics". Misguided antics refers to when we got drunk - like at Loyola, New Orleans- and pissed in a roommate's wastebasket, or filled his pillow case with shaving cream before he hit the hay.  But posting non-consensual nude photos of females in your frat house is NOT ."antics" - misguided or other. This shows how brains have been warped to believe anything goes now.

What can women do to protect themselves? The only choices - until  actual legal consequences can be enacted against these  renegades (e.g. cutting off internet accounts, job firings, banning fraternities) appear to be few:

-  Get off the Twitter feed if you tend to express controversial opinions. Take up blogging instead - which offers a format more appropriate to explaining the reasons behind your opinions.  This is a given when you're not limited to 140 characters. Blogs also afford more filters while Tweets are simply to easy for nasty retorts. This blog is moderated, for example, so I can nip any untoward comments in the bud, at my discretion - which a Twitter feed wouldn't allow.

- In the real world of 3D space, don't put yourself in environments known to be traps - such as frat houses - where alcohol flows and people will lose self-control.

Yes, college should be a fun place, but frat houses are not the venue to choose. At any university  there are numerous clubs and activities where one is bound to find an outlet for social expression as well as fellowship. These venues are also alcohol -free so there is less chance of trouble.

Theoretically, women should feel free to be able to express their opinions, selves  in any venue they desire, whether for social media or in the real world. They should also be able to go wherever they desire and even consume alcohol if they so choose.  The problem is the male-dominated world we inhabit is not conducive to every opinion delivered in any venue or to every action undertaken without forethought of possible consequences. This doesn't mean women should be fearful about their self-expression or choices but only recognize there are limits to that freedom given the social environment we currently inhabit.

When and if our lawmakers can bestir themselves to act on behalf of women, including passing laws in their interest, then women will surely have more latitude to explore and engage the world - including virtual - without fear....including of "slut-shaming".
Posted by Copernicus at 8:46 AM