The Biggest Conspiracy Theorist of All: Government! 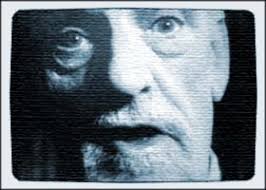 Emmanuel Goldstein - the Ultra "terrorist" in '1984'. Oceania's enforcers went batshit crazy trying to ferret out all his allies for 'thought crimes'. Are we near such a future in the U.S.?

In the popular  media stereotype, the "conspiracy theorist"  directs his particular brand of paranoia at the government: The CIA implemented JFK's assassination. NASA faked the moon landing.  9/11 was an inside job . The UN plans to invade our grand nation with black helicopters and the gov't is setting up FEMA concentration camps to help them. Oh, let's not forget that the CDC has designed flu shots to give you the flu not help prevent it!

The problem, of course, is the media is indiscriminate in conflating all conspiracies - the whacky and improbable, with those few actually proven in the sense of satisfying basic scientific criteria of adequacy of evidence and consistency. The latter set include: the JFK assassination conspiracy - including the evidence of cover-up in the aftermath, i.e. fake autopsy photos, destruction of key evidence(limo, suit coat); the BCCI banking conspiracy (which saw thousands in Barbados and around the world lose all their savings), the Watergate conspiracy - including the attempt at cover-up there, and of course, the Iran-Contra conspiracy, see e.g.  http://brane-space.blogspot.com/2012/10/argo-iran-contra-and-what-bob-sheiffer.html


But in his landmark book,  The United States of Paranoia: A Conspiracy Theory, Jesse Walker- books editor for Reason magazine, makes the case that 'folklore' may underpin most CTs and that perhaps the biggest and most baseless and misdirected  conspiracy theorists inhabit the government! Or at least that paranoid clique within government that has been so confounded by the national security state that it's lost all perspective. After all, if gov't really was determined to sort out the primary conspiracy eating away at the nation's public trust and innards, they'd release all the files to do with the JFK assassination this 50th anniversary year. Unless, of course, they were involved at some level or had one or more branches involved, and hence had to resort to cover-up.

But no, that's not the case. What's transpired instead is such a free floating paranoia that Washington is petrified of itself. The latest example is the ferocious crackdown on leaks that has the government crippled by a fear of its own employees. How many people really know the extent of this? Probably not many!

According to an Op-ed appearing by Jesse Walker in the WaPo (8/19), the  paranoid federal effort  is called the Insider Threat Program, and was launched in October 2011". Be that as it may it certainly hasn’t diminished since Edward Snowden disclosed details of the National Security Agency’s domestic spying.  Walker cites the McClatchy reporters Marisa Taylor and Jonathan S. Landay who "have described federal employees and contractors are encouraged to keep an eye on allegedly suspicious indicators in their co-workers’ lives, from financial troubles to divorce. A brochure produced by the Defense Security Service, titled “INSIDER THREATS: Combating the ENEMY within your organization,” sums up the spirit of the program: It is better to have reported overzealously than never to have reported at all.”

Walker notes "the word 'espionage' appears 10 times in that pamphlet, while 'leak' isn’t used even once"  . The tragedy of this wholesale crackdown is that "it blurs the boundary between spies and whistleblowers". This means, logically, that whistleblowers are no longer honored, wanted or respected in any form but are treated the same way as traitors.

"This comes, after all, at a time when the government is increasingly willing to prosecute leakers under the Espionage Act. An agent of a foreign power would fall under the program’s purview, but so would someone releasing information to the media. Leaking, one Defense Department document declares, “is tantamount to aiding the enemies of the United States.”

Of course this is absolutely insane, and more than one astute pundit has observed that if this had been in place 40 years ago, the Nixon Watergate conspiracy never would have been exposed. All the leakers, as well as both Bob Woodward and Carl Bernstein would have ended up like Bradley Manning or worse.

Extreme reaction? You bet! And all out of proportion, despite the fact Obama had promised government transparency. According to Walker:

"It doesn’t help that the Insider Threat Program has been adopted in agencies that have little or nothing to do with national security, including the Social Security Administration, the National Oceanic and Atmospheric Administration, the Department of Education and the Peace Corps. A tutorial for Agriculture Department employees includes a long list of 'examples of behaviors that may indicate an individual has vulnerabilities that are of security concern.' These include sleeping at your desk — that might be a sign of alcoholism — and 'expression of bizarre thoughts, perceptions, or expectations.' The list was imported, word for word, from a Defense Department document."

Jesus Christ in a cap! You know how much this sounds like the officialdom of Oceania in George Orwell's '1984'? A LOT! In that scenario, kids in INGSOC uniforms were mandated to report every bit of odd behavior detected in adults - whether 'proles' or those like Winston Smith (a kind of bourgeois 'everyman') - charged with altering the language to Newspeak!  Eventually, Winston's behavior gets him in trouble (recall his head being strapped to a cage as rats were released and shagged to his face)  as the monitoring led the INGSOC fascists to his little room hideout where he was having it on with a prole.

"The enemy within.....can live anywhere and look like anyone. The men and women allegedly atop the cabal might be based in another country, but their puppets are neighbors, co-workers, members of your family. Anyone could conceivably be — or become — part of the plot."

Ahhhh! In 1984, recall the primo villain was the arch-intellectual Goldstein! At every interlude the hapless denizens of Oceania had to sit in a large auditorium as Goldstein's face appeared on a vast screen whereupon they began screaming at the top of their lungs: 'TRAITOR!' until they were delirious. Everyone - each man, woman- was watched carefully to detect any sign of 'Goldstein' contamination leading to thought crimes.  What did this "traitor" Goldstein preach? Ha! That continuous war was used to siphon off the wealth of society to keep people living at bare subsistence. Goldstein's exact words, for which Oceania's fascists wanted him dead:

"The essential act of war is destruction, not necessarily of human lives, but of the products of human labour. War is a way of shattering to pieces, or pouring into the stratosphere, or sinking in the depths of the sea, materials which might otherwise be used to make the masses too comfortable, and hence, in the long run, too intelligent. "


But INGSOC's nabobs couldn't have any of that  'too intelligent' citizen crap, hence Newspeak: e.g. "War is Peace!"


"Today’s Leak Scare has the potential to be even more open-ended, since it isn’t rooted in fear of a particular country or subculture. There are countless motives for releasing classified or “sensitive” information to the media, from political convictions to bureaucratic turf wars. And there is plenty of material that has been classified not out of a genuine security concern but simply because it might make an agency — or someone inside it — look bad. Meanwhile, the Insider Threat enforcers’ profile of a potential security risk is vague and untested; it could send interrogators on wild goose chases, questioning employees based on groundless suspicions and poisoning the office atmosphere."

He adds, however, that the leakage isn't likely to be halted by even these draconian steps and references Bruce Schneier who wrote (when the WikiLeaks cables shook Washington in 2010), “The government is learning what the music and movie industries were forced to learn years ago: it’s easy to copy and distribute digital files.”

Well, this is the digital age after all. And the same technology that gives the gov't troglodytes vast power to snoop gives many others the vast power to disclose.

Another aspect of the bind the security fetishists are falling into is betrayed by their compulsive classification.  According to a report from the Public Interest Declassification Board last year, one intelligence agency alone classifies the equivalent of about 20 million well-stuffed four-drawer filing cabinets every 18 months. Nearly 5 million federal employees or contractors have access to at least some secret information. Even more have access to information that isn’t classified but might embarrass someone.

"That creates a double bind: The more the government trusts someone with sensitive data, the more it has reason to fear that person. Trust breeds mistrust. It’s the sort of situation that might make a person paranoid."

"Did anyone ever imagine a government so scared of its own shadow?"

He goes on to cite novelist and essayist Robert Anton Wilson, who observed: "Any secret police agency must be monitored by another arm of the government, lest it be infiltrated by its enemies. But then a sinister infinite regress enters the game. Any elite second order police must be, also, subject to infiltration. . . . So it, too, must be monitored, by a secret-police-of-the-third-order and so on. “

"In practice, of course, this cannot regress to mathematical infinity, but only to the point where every citizen is spying on every other citizen or until the funding runs out.” The point applies not just to police but to any hierarchy with secrets to hide."

To quote Walker once more:

"And so the war on leaks degenerates to a government deliberately destroying its property to keep its staffers from catching sight of publicly available information.

Now there’s an enemy within"

The moral of the story is that paranoia feeds on itself. And the more that the paranoid - whether a person who sees UN black helicopters coming to seize his guns, or a government that sees every citizen as an enemy - the more draconian steps are taken for  pseudo-protection. In the end it never works, simply because paranoia is not the way to build a foundation of trust - say between citizens and government - or to build a mentally healthy nation.  The fact that recent stats disclose that more than 20% of  the U.S. population has serious mental health issues ought to be a wake up call. Instead, we behold the entire government veering into a "Goldstein-tracking" paranoid embolism of its own making.
Posted by Copernicus at 8:17 AM