"The crime against the Constitution is so great and so longstanding, and the number of perps and betrayers so long and so wide, that they have no choice but to lie. How can they cop to a betrayal so large and sweeping in scope that what we know now is just the start?" - Blog appearing on Smirking chimp.com today ('Why Would You Believe Anything the Government Tells You About NSA Spying?) 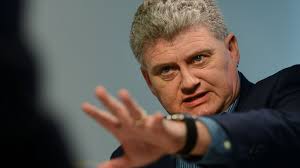 Let's also be mindful that until Snowden went to the press (WaPo and UK Guardian), few Americans knew that their phone companies, Internet providers, and social media facilitators were compelled to secretly allow the government to collect information. And despite what Obama claims (that he'd have done it anyway- to which I say, 'bull puckey') it was Snowden's revelations that now have him proposing even a "civil liberties agent" to the NSA.

Anyway, on Sunday morning, I was gratified to see Edward Snowden's father, Lon, laying it out for Neolib hack Georgie Stephanopoulos on ABC (This Week with George Stephanopoulos ) regarding how his son could hardly expect a fair hearing – far less trial – in the U.S. . This is because the whole nation has been effectively “poisoned against him" by the media hysteria.

Mr. Snowden said he had secured documents to visit his son in Russia and that he plans to talk to him about how he could fight the espionage charges against him. Snowden, of Allentown, Pennsylvania, believes it unlikely that his son could have a fair trial in the US, given what he called "absolutely irresponsible" descriptions of his son's actions from members of the Obama administration and top lawmakers from both parties. According to Snowden Sr.:

"They have poisoned the well, so to speak, in terms of a potential jury pool,"

Of course, he needed to add the corporate media too, including certain of MSNBC's "Liberal" denizens, who contributed to the Snowden hysteria and invective.  These have now become the "state media" and propaganda platform, no different from what they were (with few exceptions) than in the run up to the Iraq invasion where they ceaselessly beat the drum for war.

Family Attorney Bruce Fein, also at the table,  said the family is willing to discuss conditions under which Snowden might return to the US and perhaps face criminal proceedings. The lawyers will provide him with suggestions of criminal defense attorneys with expertise under the Espionage Act, under which there have only been 10 prosecutions in as many years.

I particularly liked Fein’s take on Ed Snowden using the example of Thomas Paine. Those who know some American history may recall Paine was the original voice of the American Revolution who penned the polemic pamphlet ‘Common Sense’,  giving voice to its basis. No American who professes to be any kind of patriot ought to be without it. Anyway, Fein made the point of how Paine argued that the ongoing need was to protect the nation from its recurring government, because it is governments which can go bad. All it takes is sheeple to replace fire breathing, knowledgeable and aware citizens keeping its government on the straight and narrow.  In Paine's own words:

"Society in every state is a blessing, but government even in its best state is but a necessary evil; in its worst state an intolerable one; for when we suffer, or are exposed to the same miseries by a government, which we might expect in a country without government, our calamity is heightened by reflecting that we furnish the means by which we suffer. "

Snowden Sr. said that the political storm over his son's actions would fade and added "the American people are absolutely unhappy with what they've learned and more is forthcoming."

"Where my son chooses to live the rest of his life is going to be his decision. But I would like at some point in time for him to be able to come back to the US,"

"The president comparing him to a kid in the back of the classroom, I think, is very indicative of the president's lack of appreciation of who Vladimir Putin is."

Well, I do agree but for different reasons, i.e. ALL major world leaders deserve to be treated with respect, especially those with whom you desire or are claiming to have had a “reset”. Anyway, McCain invoked the old Cold War metaphors:

McCain said that cancelling the meeting – initially slated for September, but cancelled last week after Russia granted asylum to Snowden – was merely "symbolic". He suggested that the US needed to do more, such as expand the 2012 Magnitsky Act, which seeks to punish Russians implicated in human rights abuses, as well as encourage  (former Soviet republic) Georgia's NATO aspirations and expand missile defense systems in Europe.

Oh yeah, Johnno Mc Nutso, that’s sure to make the Russians real happy! Expand the missile defense and add former Soviet republic Georgia to NATO - already encroaching on Russia's border. Why don’t you just toss a grenade under Putin’s chair at the next meeting he attends, you damned fucking, jingoistic, senile asshole!  This dope-ass dimwit then said:

"We also need very badly to understand that Mr. Putin does not have United States-Russia relationships as a priority"

Really? Do you have it as a priority, or are you such a fabulous mind reader you can say Obama does?  If YOU don't then don't act like a douchebag ignoramus hypocrite! McCain also  said that by granting asylum to Snowden, Putin had in effect, "put his finger in Obama's eye".

Oh, BWAAHHAAA! Give him a sippy cup or a nappy! In fact, the U.S. national security corporate state SYSTEM had gouged out Russia’s eyes with hammer -fisted blows when they proposed over the past few days going ahead unilaterally with a daft, insane missile “defense” system that they think will bring Putin and Russia to its knees. They had better rethink that. Meanwhile, a more sobering take (‘Kicking Sand in Russia’s Face’) from a former journalist (Eric Margolis) with impressive credentials appeared on smrkingshimp.com (http://www.smirkingchimp.com/thread/eric-margolis/51065/kicking-sand-in-russia-s-face  )

“The single most important national security imperative for the United States is to maintain correct relations with Russia. It’s not al-Qaida, NSA, China, North Korea, or any other issue. That’s why President Barack Obama’s insulting cancellation of his planned meeting with Russia’s president, Vladimir Putin, during the 5-6 September Group of 20 meeting in St. Petersburg is so dismaying. Russia has over 3,000 active nuclear warheads, the majority aimed at North America.

The US has a similarly powerful nuclear arsenal, primarily targeted on Russia, or in reserve for a second strike in the event of all-out war. When two men are holding loaded pistols to each other’s heads, keeping cool, calm and polite is imperative.”

But what did Obama do? He compared Putin to the “slouchy kid at the back of the classroom” C’mon, Obama! You have way more class and intelligence than that! Show it, for god’s sakes, don’t just echo the bilious bytes of the far right nut jobs! There is too much at stake here! Margolis adds that being cool, calm and polite is exactly what the U.S. (again in the guise of its SYSTEM to which Obama seems hostage) has not been doing, thereby “exposing Americans to an unnecessary national security risk for no apparent gain.”

As Lon Snowden put it yesterday morning, that’s one thing you can expect out of Washington lately, lots of “political theater” but which I call out as useless, jingoistic bombast – mostly from the likes of the Peter King- McCain- Lindsey Graham asshole axis….errrr, brigade. Occasionally joined by the usual parade of Dem Neolib  weasels like Dianne Feinstein, Chuck Schumer, Joe Biden et al. Sometimes I think I am living in a far right media echo chamber where almost everyone and his uncle on the tube blathers the nutso jabber of a certain pathological, wingnut screw job who fancies himself a "saved soul".

It’s almost like a mind cluster- fuck. Margolis, to his credit, also names Washington as the culprit in the U.S. –Russia chill:

“Behind this Big Chill is Washington’s ongoing treatment of Russia as a second or third-rate power. The US lectures and hectors Russia and affords scant concern of Moscow’s strategic interests or spheres of interest. Europe gets much the same treatment. Whenever Russia refuses to go along with US policy – Syria being a good example – it comes in for barrages of criticism over human and political rights in America’s state-influenced media and Congress.”

Which is why I had to sit appalled as former war criminal apparatchik (to the Bush-Cheney gang) Condie Rice appeared on the tube the other night blathering that “Well, Russia is now a greatly reduced power. Yes, they have nuclear missiles but they’d never use them.”

Which led me to re-gauge Condi’s IQ as no longer Mensa standard. Margolis’ concluding take is one which all the jingoistic U.S. cadre , media and their national security state tools ought to take note of:

“Instead of dealing with this major threat, Obama, under blistering attack from Republicans over the deaths of three Americans in Benghazi, Libya, is offending Putin and indeed all Russians. This is foolish, short-sighted and sure to worsen US-Russian relations as well as scuttling chances of an arms control pact in the next few years. Or, in simple English: President Obama, don’t kick sand in the face of a man holding a gun to your head. How about some presidential behavior re Russia?”

But alas, “presidential behavior” appears to be a commodity in short supply now,  when the de facto leader lacks the courage to lead, as opposed to listening to screwballs and dimwits. Alas, in that case, he merely becomes another follower – even if he doesn’t recognize it!

See also: http://www.smirkingchimp.com/thread/gaius-publius/51079/why-would-you-believe-anything-the-government-tells-you-about-nsa-pentagon-spying
Posted by Copernicus at 7:41 AM