Bullying of Atheist Kids: A 'Breeding Ground' for New "Pastors"? 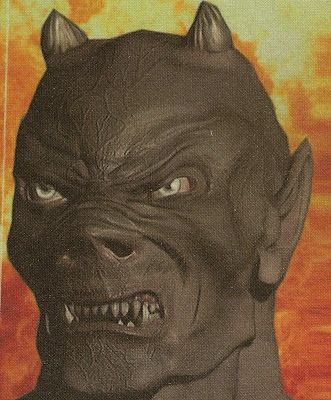 An eight-year old non-religious kid bullied into thinking "Satan" will pop out of a mirror and take her to hell? This is the kind of crap mutant right wing religious kids are now pushing on their peers if they don't hop on the God bandwagon. THEIRS!


After the story was sent to me by my sensible, non-religious brother, I had to read it over twice for clarity. I had to be sure there actually existed a school at which right wing bible -punching, brainwashed kids were actually trying to intimidate their non-religious schoolmates (who the bullying creeps dismissed as "atheists"). It made me again wonder why these twits couldn't just live and let live. Do they really believe casting hell threats against any unbeliever is going to make the person suddenly stop in his or her tracks and go for the nearest bible? What are these idiots drinking?

Yet it now seems to be starting as early as 2nd and 3rd grade. In the case referenced, the child under psychic attack said: “Susie told me because I didn’t believe in god, the devil was coming to take my soul.”

“Susie” was a fellow eight-year-old student at the beseiged daughter’s Catholic school. and attended church every Sunday with her family—the same church that many of her classmates go to. As the mother of the psychically -attacked girl described what was going on, and the effects on her child:  "She wouldn’t enter a bathroom without a friend or parent and began wetting the bed at night for fear of our extensive collection of bathroom mirrors pulling her into almighty hell at 2 a.m."


The mom went on:

"Sure enough, the religious eight-year-old was still pressuring my daughter to consider her morality, spirituality and reason for living daily in the school bathroom".

When the mom complained to the principal of the school, she wasn't taken very seriously. Bullying, after all,  was getting punched in the stomach in a dark place behind the school, not a little girl being taunted for not believing she was going to have life eternal.

But in fact the mom was spot on correct in her instincts, and the principal nun a bit retarded in her conscious recognition of the warp and woof of bullying. Because make no mistake, to a vulnerable person or kid, psychological attacks are every bit as potent and destructive as physical ones, maybe moreso.

According to the American Society for the Prevention of Cruelty to Children, every day “an estimated 160,000 students in the refuse to go to school because they dread the physical as well as the verbal aggression of their peers. Many more attend school in a chronic state of anxiety and depression.”

Verbal aggression and threats are often worse because they leave no identifiable marks - as a punch in the face would. So teachers, administrators are likely to treat it lightly. But the damage is there.

I originally encountered the extent of such damage ca. 1972-73 while a Peace Corps volunteer, visiting the Psychiatric Hospital in Barbados, at Black Rock. I was astounded to see so many young people, teens in the hospital - many being on a regular "diet" of largactyl as well as ECT. These were young people from 15-19 years of age. When I talked to the head of the hospital, Dr. Patricia Bannister, she told me most of the young people were there as results of "psychotic episodes" instilled by evidently "well-meaning" preachers and pastors, who went overboard with the fire and brimstone message. Most of the teens, sensitive and highly strung, took the messages to heart and began to search for "demons" that might drag them to hell when least expected. One insane pastor, at the Berean Bible church, actually attempted to reinforce the message with the added quip:  "Tick, tick, tock!....That's the sound of your life ticking away and your soul headed for the eternal fires!"

The nutso message so upset one girl ("Petra") that she lost it and began hallucinations similar to those reported by the 8-year old, being harassed by her nutty Xtianoid classmate.

Dr. Bannister informed me that this case, as well as another, were two of the saddest she'd encountered and estimated at least a year for each on anti-psychotics as well as three times a week electro-convulsive therapy.

Do the god and hell mongers have any guilt for such outrages? Of course not! They are convinced they're doing "God's holy will" to try to save the "damned" - at least in their mind. Bullied and brainwashed themselves into mental insensibility, they've no choice but to try it on others. (And if it works often enough, look out for the wretch to aspire to some later "pastorhood"- even if only self-proclaimed.)  Those of us who are tough minded just toss it back at them and ridicule their idiocy as well as the contradiction manifest in their faith and actions. However, the more tender-minded among us ....the more sensitive...often take the threats to heart and untold psychological damage is the result.

In relation to the little 8-year old bullied at her Catholic school, Courtney Campbell, a Professor of Religion and Culture at Oregon State University, says he encountered the same case with his own children who were told at a very early age by some of their “friends” that they were “going to hell.” Though there were no physical beatings, the “psychic bullying” may have been worse.

“There is a phenomenon of religious-bullying at an early age, though in my own view/experience with raising my kids, it’s less of an issue than lookism [obese kids], size [‘big’ bullies], or gender, or clothes, or any of a number of things that kids do to manifest power over others,”

He points out that in most conservative/evangelical/fundamentalist Christian traditions, kids are taught at a very early age in their Sunday schools or summer bible camps that there’s only one path to happiness and salvation. That teaching, absorbed at a young age, is on its own rather threatening to the child. (As well as to adults who stumble upon it, and embrace this bollocks as a reaction to their own "sin slides" in drunkenness, gambling whatever. So hyper -religion and bible punching, salvation mongering materializes as kind of a reaction formation.)

“When the child goes to school, and encounters for the first time other kids who don’t believe the same thing, whether it’s no belief or a different belief system, that can rock a kid’s world,”

Indeed! And an adult bible maniac's as well! They cannot believe or understand how....with the "fires so hot" ...there can exist other beings, sentient beings, who dismiss it all as poppycock for the feeble-minded. Their only possible reaction, because they are terrified these others might deep down be correct, is to ramp up their own hellish threats to try to intimidate whoever the target is. But they are too dumb to see it is their emotional and angry yelping that always does them in and discloses their beliefs as the province of psychopaths. So, why would any sensible or rational person jump on the bandwagon? Because of going to "hell"? That's a joke since when you're dead, you're dead. (At the very least, even if some type of consciousness is available, it's not localized, e.g. http://brane-space.blogspot.com/2012/07/has-stuart-hameroff-explicated-way-out.html)

Meanwhile, Rachel Wagner, Associate Professor for the Department of Philosophy and Religion at and author of Godwired: Religion, Ritual and Virtual Reality, says we are overlooking a major player of the religious bullying model—video games. Thus, the "shoot  them bad guys" template is adopted if only unconsciously.

While Wagner admits it’s very important to remember that all world religions also have “deep and abiding practices urging compassion, understanding, tolerance, and social justice,” in today’s media-soaked society, feeling the need to retreat into a simpler world where people can be reduced to camps can be terribly tempting. Hence, it's simpler to brand all "unbelievers" as "Hell bound" and arrange the world into sheep and goats. But this is a retarded perspective which never bears much productive fruit in the long run, and again, the hell-pushers and would-be pastors and "saviors" never get it that it's their behavior that pushes most people away. Their brash, aggressive shtick is a turn-off and no one who's the least bit grounded mentally wants to hear it.

Meanwhile,  Stacy Pershall, author of Loud in the House of Myself: Memoir of a Strange Girl, says that growing up in , in an athletics-focused, Christian bible belt, she was used to being surrounded by “Jesus talk.”

Perhall goes on to add:

“Although it still makes my heart pound a little to stand in front of a crowd and admit that I don’t believe in god (as I recently did at in D.C.), somebody needs to do it. I get to be the adult who says to kids, ‘I’m an atheist, I have morals, I have friends, I’m happy, and I care about how you feel.’ That’s a wonderful, powerful thing. I get to tell bullied kids who might be considering suicide that they’re not alone, and that they have kindred spirits. It’s what the Flying Spaghetti Monster put me on Earth to do.”

That's a sentiment with which I could not agree more and a powerful reply! It sends a message to the would-be tormentor and religious psychological bully that you regard his beliefs and his central "god" with about the same gravitas as a totally dreamed up confection....especially since s/he can't show any singular proof for any claims anyway! (Citing biblical quotes doesn't count since that invokes the logical no-no of appeal to authority...or presumed authority.)

Posted by Copernicus at 9:25 AM