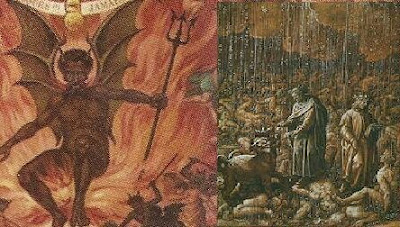 Are assorted “sinners” saved or will they burn in "Hell" forever? Alas, the Good Book held sacrosanct by the brain dead Christianoids can’t make up its mind!


Interestingly, the Hyper-Christianoids, assuming they DO follow their Good Book to the letter, have a REAL problem: How to reconcile numerous contradictory quotes, passages to do with "salvation". This is important because these twits base their whole purpose for living on trying to "convert" or "save" heathens. I.e. Atheists, secular humanists. So, if they can't deal with the contradictions, their heads "explode" when we ask about them.  If they take their Bibles literally, without resorting to qualifications or exegesis, they are compelled to admit their book is either: a) mythical - the vast bulk of material mostly legend, or b) lying - given the stark contradictions, or c) they don't know how the hell to interpret it.

Be assured the zombie fundies will deny everything or say we who approach this book rationally (as we would have in a genuine theology- Exegesis course are "fools"). They'll merely insist the clashing quotes are “inconsistencies” which are not contradictions. I guess this fits right into their fantasy realm wherein they can believe six impossible things before breakfast- so this isn’t too startling.


However, an “inconsistency” defined in my Webster’s Unabridged Dictionary, is given as:

"Lacking in agreement, as two or more things in relation to each other"

"Direct opposition between things compared, inconsistency. That which is inconsistent involves involves variance, discrepancy or even contradiction, especially from the point of view of truth, reason, or logic."


Note that the word “discrepancy” above, ALSO means DIFFERENCE!

Thus, the two words can, in effect, be used interchangeably, and moreover there is more than the implication (from the latter extension of the def.) that an assault on truth is involved. Now as to reconciling the contradictory passages, I still maintain as I did before that this CAN be done, but ONLY if one adopts a non-literalist approach. Yes, the writers used differing colloquial terms of the period, and maybe even there were “copyist errors” to account for differences.. BUT IF either is true the bible’s words CANNOT be taken literally but must be re-interpreted, e.g. in light of the jargon or word forms of the time, or to reckon in the copyist errors!


Biblical literalists, basically, want to "have their cake and eat it too". They want to claim the bible is “inerrant” and can be read “as is” – literally - but then they want to also claim the “contradictions aren’t real" or have to be parsed in the context of "what the writers really meant". (In other words it can’t be read “as is”) They don’t understand they can’t have it BOTH ways! Either the bible is inerrant and stands alone without the need to interpret the differing passages, OR it can only be read in the spirit of the book and interpretations are a natural part of it.

So, now we give more contradictions to do with the “Salvation” myth. In each case, a question will be given - then the answers: 'YES' and 'NO' and the biblical sources where each is found.


2. Will everyone get saved?


3. Is salvation totally predestined by God? (Meaning there is no "free will")


4. Is one who believes in God's son, but who has never repented, saved?


5. Is one who believes in God's son, but who has done no good deeds, saved?


6. Is one who is very moral and charitable, but who does not believe in God’s son, saved?


Note that NONE of these entails “minor differences”. If someone who refuses to accept Jesus Christ as Savior but is still moral and does good works, as applies to most atheists, then the last set of quotations mre than supports his position.

In the end, despite all their bluster and rectitude, the fundies don't have a clue what the prescription for their own salvation is, since they haven't been able to sort out their own scriptures. They ought to at least do that before trying to proselytize the rest of us! Oh, they will make excuses, sound accusatory and inflammatory notes and use ad hominem against us, but ask them to seriously reconcile the citation differences without use of lame tricks and they will punt! All they have left in their meager mental quivers is blunderbust. Or, to use another more colorful term: Bollocks!

Posted by Copernicus at 9:35 AM