A Mammoth Black Hole In a Small Galaxy? 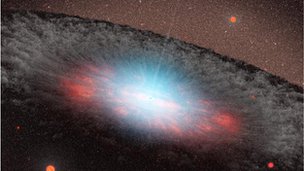 The Biggest story in astronomy the past few days has been the discovery of an enormous black hole - the second most massive ever detected - in a relatively tiny galaxy. The galaxy: NGC 1277, is just a quarter the size of our own Milky Way, but hosts a black hole 4,000 times larger than the one at the Milky Way's centre.


A report in Nature shows it has a mass some 17 billion times that of our Sun. This surprise finding is hard to reconcile with existing models of black hole growth, which hold that they evolve in tandem with host galaxies. In any case, the black hole concept has always been tricky and even a few high profile astronomers like Lawrence Krausse have expressed skepticism.

But this skepticism is misplaced. The fact is black holes emerged  emerged out of Kurt Schwarzschild's specific solution of Einstein's general relativity equations, viz. for the interval ds:


Now granted, no one has ever literally seen a black hole but we know how to recognize the physical evidence for its existence: very powerful and periodic bursts of x-rays, registered on sensitive satellite detectors. Mathematically, the very brief periods of less than a millisecond betray an extremely compact volume. The x-rays indicate accretion to a large mass. Together, these can be matched to predictions given in the Einstein general relativity equations and Voila! the black hole emerges as an object consistent with the observations.

In general black hole identification is predicated upon observing its effects as a member of a binary (double) star system. Thereby, the black hole presence is inferred from x-rays given off when the companion star’s gaseous layers are sucked into it. As those accreting gaseous layers are pulled through the hole's event horizon, they are condensed and the impacting plasma leads to intense heating and x-rays. It is the rapid periodicity of the x-ray signal that betrays the presence of the black hole since no truly massive object on the order of 3-4 solar masses (for typical stellar black holes) could possibly make single revolutions about a primary normal star in seconds timeframes!

Now..back to the recent find.  In galactic black holes of the type just found, we are looking at prolonged and progressive accretion of surrounding matter which 'feeds' the growth of the black hole. To detect these beasts,  the Hobby-Eberly Telescope was deployed to look specifically for massive holes in galaxies. It then undertook a survey that brought in a haul of nearly 900 host galaxies.

However, the counterintuitivesurprise  has been that some of the most massive black holes have been identified in the smallest galaxies - like NGC 1277, 220 million light years distant.  What manner of technique was used? In a simplified sketch, the astronmers made a computer model of the target galaxy which incorporated all possible stellar orbits within it, allowed by the dynamics.   This approach would have reckoned in a certain parameter, c =  ko / W .   Here c is the number of epicycle oscillations per orbit about the galactic center, which is given by the ratio of the star's epicycle frequency ( ko ) to its orbital angular speed ( W  ).    For example, in the case of the Sun, we have  ko = 1.35. From this we can find the other parameters.   We know that the Sun’s period around the galactic center is: 2 x 10 8 yrs. We need to obtain this in seconds:

Moving on, after the computer assembles all such model orbits from similar computations for other stars, the results are assembled so the final product galaxy exhibits the same stellar velocities as measured (again, deducible from the values of  W ).  The research team thereby found that the hole in NGC 1277 held 14% of its mass.

Astronomers whose specialty is black holes look forward to more of these amazing finds, and also whether NGC 1277 indicates the exception rather than the rule - as the current assay appears to suggest.
Posted by Copernicus at 11:25 AM