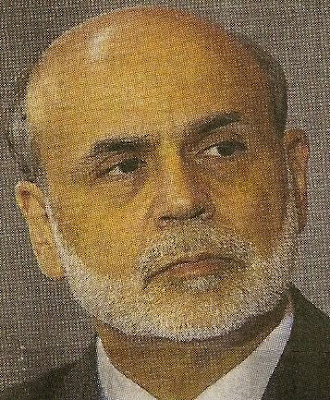 The indefatigable Ben Bernanke is at it again, trying to ramp up employment by keeping interest rates effectively near zero...or below. Sadly, it won't work because Bernanke is addressing the symptoms and not the causes - which amounts to a crisis in aggregate demand and insufficient real wages to support a recovery.

As I noted in previous blogs, "aggregate demand" depends on real investment and real income gains. The first activates corporate money sitting on the sidelines (as is now the case) and puts it into labor expansion. Right now, we've got over $2.2. trillion sitting and doing nothing - mainly because the corporate investors are stymied by the lack of government action on taxes.

Meanwhile, the other side of the coin - income - isn't doing much better with real wages having fallen some 4.4% since the 2008 credit crisis. Obviously, if people lack sufficient money (income) to spend or buy what they need, then company inventories pile up, stuff sits there on the shelves just rotting - and workers either must be let go, or is more the case now, not hired. Hence, the investment and income aspects comprise two poles of the same aggregate demand axis.

As Robert Reich (former Clinton Treasury Secretary) has noted, "the sad fact is near-zero interest rates won’t do much for jobs because banks aren’t allowing many people to take advantage of them. If you’ve tried lately to refinance your home or get a home equity loan you know what I mean."  Indeed, which is why many homes here in the Springs - for instance- are still unoccupied. Meanwhile, new higher paying jobs are scarce here, so people must make do with work at Safeway, Walmart and other retail places like Best Buy (nearly 13,000 were displaced from high tech, terrific paying jobs since 2004). What this means is that the money isn't there to fuel recovery.

Worse, prices continue to go higher, though Bernanke insists (based on a specious index for inflation) there is no inflation! Tell that to the moms searching the stores for affordable Christmas turkeys! According to an article,  'Consumers Price in Real Cost of Living',  appearing in The Wall Street Journal some months ago (2/17, p. B1) Bernanke dismissed higher costs in food, housing - even exploding rent, as well as meds - as:"essentially made up numbers" .

Bottom line:  according to Bernanke's statistics, higher costs of gasoline, groceries, rent and so forth - while not exclusively in our heads (they are removed as "shelter costs")  are of no concern to him as regards inflation. After all, the CPI or consumer price index, is gamed to lowball the impact of these shelter costs so that even if inflation is really going up by about 2% a month, to Bernanke and his Pareto-stats it is really ZERO since his statistics don't show up anything worth fretting over.

Thus, he can jolly well continue to keep interest rates near zero - giving all the stock investors major Joneses - while savers and ordinary mortals who have to pay costs in the real world suck salt. Then Ben wonders how it is that people and companies continue to sit on their cash as opposed to spending it, and why no jobs materialize. I mean, hell, we aren't doing advanced calc here! Or even basic group theory!

Another sobering comment from Reich:
"Banks don’t need to lend to homeowners. They can get a higher return on the almost-free money they borrow from the Fed by betting on derivatives in the vast casino called the global capital market."

"Low interest rates also lower the cost of capital, which in theory should encourage companies to borrow for expansion and more hiring. But companies won’t expand or hire until they have more customers. And they won’t have more customers as long as most people don’t have additional money to spend."


And here we come to the crux of the problem. Consumers don’t have additional money. The median wage keeps dropping, adjusted for inflation. Most of the new jobs in the economy pay less than the jobs they replaced. If Bernanke could in any way see this, he wouldn't be continually trying to appease the speculators with troves of cheap money, via unrealistic and low interest rates. No, he'd be adding income to segments of the population that need it - like oldsters! Many of them depend not only on Social Security, but also fixed income interest streams which have approached chump change levels thanks to Ben's zero interest paradigm.

At the very least, given the higher costs of food and fuel, Bernanke ought to let the interest rates go up to 1 percent. An oldster living on a $10k money market account or CD would then at least see some real extra money  - say to be used to help with drug -medication costs, instead of the piddling few cents now available.

But Ben is there, not necessarily to help create mainstream jobs, but to keep the speculators, traders flush with their commissions....especially now as Xmas approaches!