Where Will It Crash? We Don't Know! 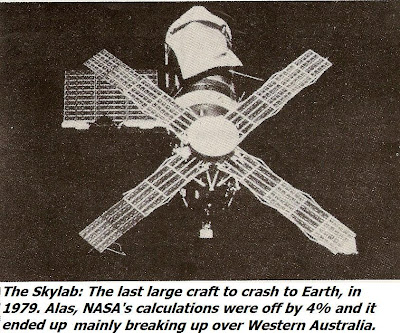 Most of us alive and aware in 1979 still recall the crash of the Skylab space station (see image) to Earth, all 85 tons of it - with the station itself as tall as a 12-story building. Now, it appears, we face another crash to Earth, this time of NASA's Upper Atmosphere Research satellite, which - while a 'dwarf' compared to Skylab (only 6.5 tons and 35 ft. long) can still do some significant damage if it were to land more or less in one piece on a populated area. (The projected impact is forecast to be somewhere between 57 deg. North latitude and 57 deg. South.)

In the case of Skylab, its imminent burnup became inevitable when greater than normal solar activity (associated with the Solar Maximum for Cycle 20) caused incipient heating of the atmosphere and expansion which resulting in atmospheric drag on the relatively low orbit and its subsequent decay. This was despite a boost of an extra 6.8 miles leaving Skylab in a parking orbit of 269 miles.

At the time it was believed the enhancement would permit the station to last into the 1980s but no one foresaw the intense solar activity so early, or its effects. The original NASA prognostications had the craft eventually ending up in some 500 pieces and scattered over a path 161 km (100 mi.) wide and 6,437 km (4,823 mi.) long - ending up somehwere between 50 N. lat. and 50 S. lat. Originally, NASA had estimated that the chances of re-entry would be about 1 in 152 (or equivalently, 152 Skylab re-entires would produce 1 injury).

Needless to say, much media hubbub surrounded the impending crash.(The San Francisco Examiner offered a $10,000 prize for the first piece of Skylab delivered to its offices; the competing Chronicle offered $200,000 if a subscriber suffered personal or property damage.) The biggest joke was that NASA blew its early predictions in two ways: (1) the Skylab took much longer to burn up than forecast originally, and (2) the actual area of impact did occur inside the 50N-50S limits but was skewed heavily over W. Australia due to a 4% miscalculation. Thus, the actual debris field extended between Esperance and Rawlinna, from 31° to 34°S and 122° to 126°E. (A 17-year old, Stanley Thornton found a few pieces of Skylab at his home in Esperance and caught a flight to San Francisco, where he collected the Examiner prize. Meanwhile a none too happy Shire of Esperance fined the United States $400 for "littering")

In the case of the current NASA 6.5 ton satellite, the odds of a person being injured are about 1 in 3,240, which translated to a higher probability than being in an auto accident over the next year (about 1 in 5,000). NASA calculates the atmospheric re-entry will cause the satellite to break up into about 100 pieces of which an estimated 25-26 will surivive the re-entry burn and spray themselves over a debris field 500 miles long. NASA estimates the largest chunk will likely be about 300 pounds. Thus, so long as it doesn't land on a house or building, everyone out to be fine.

When will the pieces land? NASA can't say for sure. It could be this Thursday, or Friday or even Saturday.

Stay tuned and we will give you the details assuming the 300 lb. piece doesn't land on a certain blogger's domecile!
Posted by Copernicus at 9:07 AM