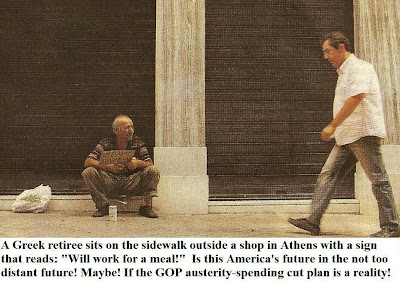 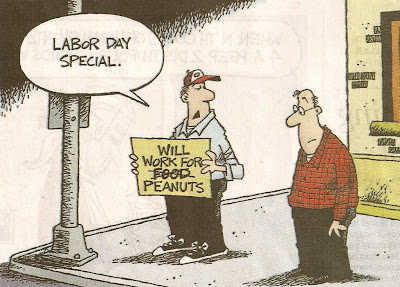 Well, as I'd been predicting, the instability of the economy and the stock market manifested once more yesterday in a 253 DOW Jones Industrial Average tanking, following another dismal jobs report - this time showing no new jobs created and an unchanged 9.1% unemployment rate. (Which is technically more like 16%, see also the reasoning for this in the book: The Judas Economy: The Triumph of Capital and the Betrayal of Work)

But anyway, for those looking for any "silver linings" as to a future good jobs report, I estimate you have about 444 more weeks to go, or roughly 8½ years. The reason? Because within a short time the nation is about to embark upon one of the most stupidly wasteful economic experiments in its history - based on the flawed presumption that austerity and "spending cut" budgets will fuel the economy back to health. As one Brit economist put it, "That's like saying that by cutting off your right foot, you will run faster."

Perhaps the best take on what lies before us has been compliments of Jeff Madrick, of the Roosevelt Institute:


This author of The Age of Greed, who appeared on Keith Olbermann three nights ago, made the correct assertion that we can have either a fiscal -jobs policy predicated on smart deficits or dumb deficits. In the latter case, which I will focus on first, we cut and cut and cut spending to the bone...and get nothing but only heartache and destitution, hopelessness ....best encapsulated by what's happened to Greece. (See, e.g. Greek Cuts Erode Livelihoods, WSJ, Aug. 23, p. A7).

To give readers a Bird's eye view of our likely future in the case of dumb deficits and austerity budgets, the Greco cuts have already massively eroded livelihoods and social structures. Businesses are closing in Athens and around the country en masse, because with proprietors' income cut by 70% or more (from lack of consumer demand) they can no longer afford to pay their rents. This even as the Greece government itself is increasing property taxes.

Others affected by the massive cuts include retirees, ordinary workers and the unemployed, since they can no longer buy goods, have had to penny pinch - sending more businesses into the crapper and increasing unemployment even further. According to one Greek affected: "The government has no sense of reality. They only know how to talk numbers".

Meanwhile, retired elderly - with zero job prospects - sit on Athens' streets with cardboard signs (as shown in the image) which say: "Will work for a meal!"

Will this be what American seniors and others are reduced to within 2 years?

Economists meanwhile estimate that the stringent austerity measures taken since last year "shaved three percentage points off Greek gross domestic product in 2010 and again in 2011". In effect, three-fourths of the decline in the past two years has emerged from budget cutbacks! Consumer spending alone, accounting for 67% of the Greek GDP, has fallen by 7%.

The total effects have been disastrous: one in four retailers in Athens has closed its doors tossing out its workers, and meanwhile 80,000 businesses across Greece have gone bankrupt since early 2010. If the austerity continues, another 200,000 will shut their doors by year's end.

The crisis has metastasized to the extent that even health care is being adversely affected, with hospital staff reporting shortages of dozens of medical supplies from sterile needles to bandages to antiseptic. According to one doctor:

"We've had to postpone routine operations because of a shortage of stitching thread."

A preview of what lay in wait for us, in the U.S. ? You had better believe it!

All the same indicators are right there, if we embark on the pure austerity path, and that starts with the projections of the economists at JP Morgan Chase Co. who projected a total growth in GDP next YEAR of only 2.7%, or a similar 3% drop in aggregate GDP for the year - the same as Greece- if the austerity budgets come to the fore and congress is exclusively devoted to spending cuts.

So, what must be done to avoid the fate of Greece? In short: we need a new jobs stimulus and massive government spending on the order of $200 billion a year to jump start them! This is the point Madrick made to Olbermann, pointing at the devastation from Hurricane Irene in the Northeast, for example, and the thousands of downed telephone wires.

As a first job incursion, all those wires - instead of being allowed to hang freely in the air waiting for the next storm - need to be buried underground. This is now the approach of other advanced nations. It also should be done nationally. This task alone would employ over 300,000 for at least five years. Add on all the other infrastructural work that needs to be done, from repairing deteriorating bridges, water mains and sewers...to the federal highway system, and you're talking about jobs for 2.2 million people and a drop in the unemployment rate of up to 1 %.

This will cost, at the least $200b a year and I'm more inclined to estimate it at $250b a year. But that is small change compared to what we've pissed away in Afghanistan and Iraq (to do "nation building" there) while our own nation has seen its foundations rot.

The $64 question, of course, is whether the Repukes (like Eric Cantor) will allow this, or stick strictly to massive spending cuts...sure to send us off on a course like Greece's.

Obviously, these idiots want to make Obama a one-termer, so from that perspective will not likely toss him - or the nation - an economic lifeline.

The bottom line is they are happier seeing the nation head for the dumpster of history, while super charging their own political ambitions for 2012. (Indeed, one piece in yesterday's WSJ, p. A1, even quoted one RNC spokeperson as asserting the GOP might be able to retake the Senate if they just maintain their no compromise position, while making Obama cave all the time.)

Sadly, this is what our nation has come to: An unwilling (and perhaps unwitting) hostage to one party - which, with malice of forethought - has undertaken wrecking the country to ensure its own transitory political advantage.