Class Warfare? YES! By the Rich Against Everyone Else! 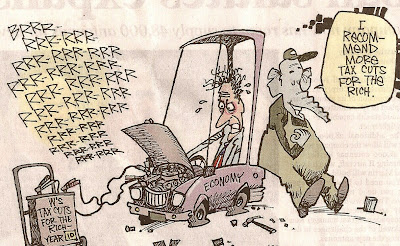 The eruptions by the punditocracy and corporo-media cognoscenti in the wake of Obama's Rose Garden speech yesterday - declaring he intends to veto any bills which don't include tax hikes as well as spending cuts (especiallly for benefits to the poor and middle class) are enough to make me howl with laughter. At the core of their loud protests, akin to squealing like stuck pigs (especially from the party known as Re-pigs), are the words "class warfare". In other words, Obama is declaring "class warfare"against the poor little rich farts and the "job creators".

Give me a fuckin' break already! What's truly amazing is that this crappola is even taken seriously any more by anyone with more than air between the ears. Because anyone who's the least bit read in the realm of deep politics and macro-economic strategy knows it's the rich waging the class warfare - against the rest of us! The rich, meaning those who've been the beneficiaries of Bush's tax cuts the past ten years (going on eleven, and possibily twelve, if the fuckers aren't retired next year) and now own 12 Lamborghinis along with their 5 Mercedes, and three 45,500 sq. ft. 10 bedroom homes, including two vacation homes (one in Aspen, one in Aruba) are the ones making war on the rest of us!

How so? I list the assorted ways below, and briefly describe each:

(1) By using the Billionaire Koch Brothers ploy of massively funding a group of hare-brained morons who call themselves the "Tea Party", and letting these bozos believe they're fighting for apple pie, motherhood and the American way of "independence". Then crassly using the ever pandering media to enable these dupes and useful idiots to spread the nonsense that we are as a nation "taxed too high" when in fact it's the lowest (as a % of GDP) in the past 40 years.

(2) Then driving the corporo-media, especially Faux News, to give these whackos lots of media attention so the whole country comes to believe they are somehow a powerful force with which to be reckoned (or for the opposition party the Repukes to reckon in) when they aren't any more than elaborate, ambulatory, decked out (in ld hats and flags) dogshit masquerading as latter day "revolutionaries".

(3) Setting up 'Think tanks' to lie their asses off about the definition of poverty, as well as arguing that the American poor aren't really poor by any objective definitions or via using world wide comparisons.

This tactic was actually mentioned by Denver Post-Wall St. West columnist Al Lewis in his Sunday article (Business, p. 7) noting how the Heritage Foundation has insisted in assorted releases that the American poor (who now comprise 47 million, according to the U.S. Census) are only "allegedly poor". Lewis then cites some of their propaganda, actually more like bullshit:

"Poor families certainly struggle to make ends meet, but in most cases they are struggling to pay for air conditioning and the cable -TV bill as well as to put food on the table"- (Heritage Foundation, July, 2011 Report)

Heritage (bless their miserable little black hearts) evidently points this out for the powers-that-be so that welfare or food stamp dollars won't be "misallocated".

The same report then goes on to claim:

"The Census Bureau's report, though widely publicized by the press, provides only a bare count of the number of Americans who are allegedly poor"

Lewis rightly calls think tanks like Heritage "poverty deniers". In a way they're every bit as bad as climate change deniers, because they use the same principles of agnotology (derived from the Greek 'agnosis' and hence the promotion of culturally constructed ignorance) to confuse and mislead the public.

For example, by interjecting the poor having air conditioners (despite the fact they're now a necessity in many places, especially after the recent summer in which 7,500 records were broken - including for night time highs) they seek to make gullible citizens believe that owning a/c means you can't truly be poor, never mind it may only be a small unit in one bedroom, while the average lard ass rich guy has one in EACH of his 22 palatial rooms!

The cable TV thingie is also conveyed with the same intent, as if this minor - very minor luxury (since even the WSJ published recent stats showing those earning below $30k/yr. have cancelled all cable channels except for 'basic') is anywhere on a par with the wealthy owning an average of 10 HDTVs (65") each, as well as DVRs and DVD players for each - that are, of course, well ensconced in Home Theaters! (With Surround-sound).

At the end of the day, as Lewis correctly notes, the U.S. has always determined a significantly higher threshold for defining poverty because it's presumed to be the golden land of opportunity, not to mention "the richest nation on Earth". Hence, it's somewhat idiotic to pair American poor who may own cable TVs and have a/c against people living hand to mouth out of garbage dumps in Djibouti! The living standards in the two nations differ, and so much the respective definitions of poverty. The mere fact that median household income is down 7.1% from 1999 is major cause for worry. Add that to the fact the actual poverty level has been lowballed since 1969, since the poverty level for a family of 4 has been fixed since that year, although the dollar has declined by a factor 4 in value.

But this shit sells and is gobbled up, because those who accept it don't know any better.

So, septic tanks like Heritage and similar entities would, if they could, insist government deny to poor people even the most minor, vanilla luxuries so they can save on their precious tax dollars.
Another tack, is to use the World Bank definition of poor (earning $1.25 a day or less) and arguing Americans don't meet that standard, never bothering to point out that housing, for example, is dirt cheap in those nations and that many social supports are often offered. (For example, in Barbados, though the average laborer's wage is barely $3.50/ day, the government offers free medical care, free education - through university level if students qualify, and low rental housing)

Meanwhile, if a poor American happens to live in the wrong place, though he's earning the princely sum of $18,000 a year, he may not be able to make ends meet and feed his family (hence the 1 in 5 American kids who go to bed hungry each night).

(4) A political party, aka Repukes or GOP, who insist the "job creators" will be dinged if Obama's plan (which merely requires the rich be taxed at the same rate as the middle class, not beyond) is passed. But don't buy it! This is codswallop cubed!

These job creators (according to a WSJ report from Monday) are still sitting on $2.4 trillion in cash.

In the meantime, the "lower echelon wealthy" (earning $1 million or more each year) are splurging by buying big stones (mainly emeralds and 10 kt. diamonds)at Tiffany's and lots of high fashion articles at Nordstrom's (according to similar reports appearing in the WSJ's Marketplace section) while also buying new yachts, and investing in hedge funds.

At least one report I read in the same Marketplace section last week, basically extolled these rich fuckers for "holding up the consumer's end of the economy since most middle class can't". Can you believe that?

The true fact is if there are no higher taxes imposed on these rich bastards, they will simply increase their splurging on luxury items: new Bentleys, yachts and blood diamonds while American kids starve.

No country worth more than doggy lickspittle can tolerate this for long without severely compromising its domestic tranquility. Then you will see the REAL class warfare!
Posted by Copernicus at 10:33 AM