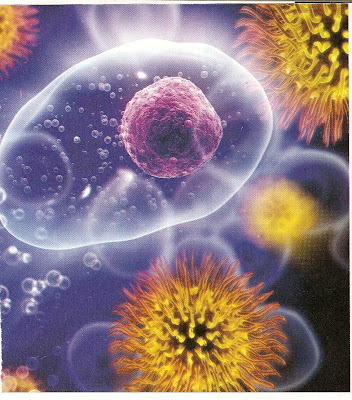 Having just seen the new movie, 'Contagion', I didn't acquire the germaphobia of so many viewers (according to one Chicago Sun-Times columnist), but I did come away with a new appreciation of just how plausible a novel killer virus pandemic could be. (Which even the Head of the CDC acknowledged in an interview on CBS News last week).

One also learned a bunch of new terms, including the "r-nought factor" or the index which marks the rapidity of the spread, based on the virus' own reproductive rate. Just in the space of 30 mins. in the film, the new virus r_o went from 2 to 4.

But is this sort of virus the real contagion we must fear, and act against? Or might it be something more insidious - something that doesn't destroy bodies so much as minds? New research indicates we ought to pay at least as much attention to the association of primitive microbes with mental illnesses, as we do their epidemiology and manifestation of physical symptoms. Indeed, with new cures many have forgotten that ancient mental illness often had its origin in biological microbes. For example, before the widespread use of penicillin, a major cause of mental illness was syphilis.

Research today, meanwhile, discloses that viral infection can affect the neo-natal brain and contribute to mental illness even before birth. Unlike the case of physical deformities such as club feet or missing limbs, one doesn't even see the mental deformity and it doesn't manifest clearly often until years later. Then, suddenly a son or daughter "loses it", kills his or her family while they sleep (such as recently occurred here in Colo. on two occasions) and no one has a clue why.

Admittedly, early studies in this area were spotty and inconsistent, depending mainly on observations in the wake of infections suffered during a mother's pregnancy. In many of those cases, it was later found that the children had an elevated risk of schizophrenia....the type often marked by hearing internal voices and dictates to 'do this' or that. People here may recall the case of the 'Son of Sam' and how the seriously ill David Berkowitz claimed his neighbor's dog kept transmitting internal dictates to kill. This is actually very typical of certain types of schizophrenia.

Among the more interesting recent studies have been some which disclose that a maternal infection of influenza increases the risk of her child developing schizophrenia within 20 years. Despite some early confusion (some workers backing up the finding others not) the link became clear after more precise studies traced the link not to the infection per se, but to antibodies produced by the mother. For example, Alan Brown calculated in a 2010 paper that more than 30% of the total risk of developing schizophrenia comes from pre-natal exposure to the flu virus.

But it wasn't the infection per se that triggered the problems, but the mother's physical reaction to it. In other words, the mother's immune system generated a flood of chemicals, molecules with exotic sounding names (chemokines, cytokines) that surge through the placenta into the fetus. In the words of Dr. Robert Friedman, a psychiatrist at the University of Colorado:

"The result may be compromised fetal brain development".

The connections were more soundly established when researchers exposed pregnant mice to molecular mimics of viral RNA, which exposure inhibited production of stem cells that give rise to new neurons, and other cells needed in adulthood. The exposure, in other words, blocked the growth of specialized neural cells needed by (and destined for ) the neocortex. The damage was so severe that the affected mice were not even able to walk properly.

In humans, the consequences may not be this physically dramatic but can affect higher order thought. Little known by most people is that the brain automatically "cleans house" several times during a child's maturing years. It releases a chemical that dissolves and destroys all unproductive, unused or redundant axon-dendrite connections, and possibly supportive cell networks as well, leaving the productive neural fields intact. The problem is that when the stem cells don't exist to sustain the productive neural fields, brain damage ensues. This may be reflected in everything from learning disabilities, to perhaps autism and ADD.

Worse, almost any virus can be the culprit, not just influenza. According to epidemiologist Mady Hornig of Columbia: "The damage to neurons and nerve cells might not be evident right away, but manifest later as cognitive and behavioral problems".

How bad might such problems be? Evidently from the work on mice, extrapolated to human models, the specific results depend on the timing. If then neural cells are killed by the mother's immune reactions before they mature (and can be replacements when the brain 'house cleans') they will permanently be absent from the brain's neural networks, with those formed at the time of infection most vulnerable.

Worse, the affected circuits and neurons could be time-delayed, so that the adverse effects may go off like so many "time bombs". For example, the most adverse effects (say paranoid schizophrenia) may be delayed into adulthood if the particular circuit damaged by the mother's cytokine flood is not recruited (say for replacement duties, after the final brain clearing out) until that time. Hence, a college student could suddenly "flip out" and lose it as a result of paranoid ideations - such as occurred at Loyola Univ., New Orleans some three years ago when a female frosh student on Biever Hall's 6th floor suddenly grabbed her roommate by the hair and slammed her head into the dorm door five or six times (as reported in The Loyola Maroon). In this case, the crazed girl was taken away, expelled and the roommate survived.

We already know, in the case of schizophrenia, abnormally low numbers of neurons and incomplete clustering appear in particular regions of the brain, suggesting that something went awry when these regions were constructed. The most likely source is that the potential and critical cells that would later be needed for recruitment after the last brain house cleaning, were severely damaged by the cytokine flood incepted by mom during an infection....flu...or whatever. Evidently, researchers have since discovered the cytokine flood triggers can be endless: from flu to rubella virus, to toxoplasmosis (the same thing that may have triggered the Anders Breivik massacre), and even genito-urinary infections.

Fortunately, special medical departments have now been set up to dedicate their work to this domain and now inlclude The Stanley Division of Developmental Neuro-virology at the Johns Hopkins University. Their most recent finding? In a study of all children born in Denmark since 1981, mothers infected with the herpes simplex 2 virus had a 56% greater chance of having a child who later developed schizophrenia.