Yes, the Universe Created Itself from NOTHING! 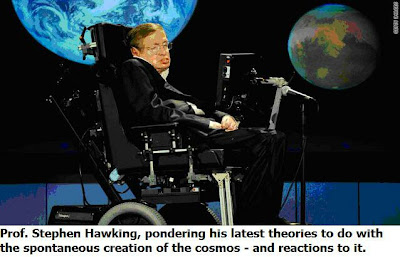 As we saw in the previous blog, Stephen Hawking has blown fragile minds hither, thither and yon with his recent remarks based on his new book. See also this spot segment:

(Allow 10-20 seconds for commercials to pass)

All I can say is a hearty 'Bravo' to Prof. Hawking for again coming out and speaking truth to the preliterate, unscientific Babbits of this planet(as he did about possible alien threats) and letting them know the universe did indeed create itself from nothing. To those of us familiar with tensor calculus and modern quantum gravity theories, this isn’t amazing at all – but common sense (Well, okay, very close to it). But to fundies, religious zealots and supernaturalists, their minds end up being blown because they haven’t got the wherewithal to examine the theories objectively. Most of the religious miscreants now reacting strongly to Hawking have likely never taken even a basic physics course in secondary school, far less university – and forget about higher mathematics like tensor calc- most have never taken basic calculus! Yet they purport to tell us what makes “sense” and what doesn’t!

So why all the kerfuffle? Basically because Professor Hawking has punctured their fantasy balloons that a god made it all, or taken away their security blankets. Pick your metaphor, it comes to the same thing!

Of course, all the religious leaders – fearful their minions and charges will be afforded the opportunity to exercise their own minds- immediately weighed in, mostly with rubbish.

The Archbishop of Canterbury Dr. Rowan Williams, expressed the view that "physics on its own will not settle the question of why there is something rather than nothing."

Which is technically correct, and also why Hawking might have chosen his own words more carefully – opting to say HOW we are all here is a result of spontaneous inception, not “why”. . What physics can do is to show that there is no need to retain a “creator” at all, since it doesn’t help advance its own predictions. Believing in a creator doesn’t assist me in formulating better solar flare models, nor help cosmologists in assessing the extent of dark energy. In other words, it’s a redundancy.

Meanwhile, Chief Rabbi Jonathan Sacks has said: "Science is about explanation. Religion is about interpretation ... The Bible simply isn't interested in how the Universe came into being."

Well, Rabbi, I DO wish you’d tell your fundie counterparts that! And also to keep their noses, ignorance and dull, semi-educated brains from pontificating on physics theories they couldn’t understand even with a brain transplant!

Then Ibrahim Mogra, an imam and committee chairman at the Muslim Council of Britain, was quoted by the London Times as saying: "If we look at the Universe and all that has been created, it indicates that somebody has been here to bring it into existence. That somebody is the almighty conqueror."

Which again brings up the question – never answered or addressed by ANY religionists, of why there is so much dark energy? Why did this “somebody” find it necessary to create something that will ultimately rip the universe apart and all life with it? More to the point, WHAT exactly is this “almighty conqueror” conquering? As usual, the opinions of this or that religious leader are a dime a dozen but none of them offer the necessary and sufficient conditions for their god to exist.

Meanwhile, Hawking's obscurantist colleagues at the University of Cambridge in England, also chimed in with poor results. Denis Alexander, director of The Faraday Institute for Science and Religion opined:

"The 'god' that Stephen Hawking is trying to debunk is not the creator God of the Abrahamic faiths who really is the ultimate explanation for why there is something rather than nothing,"

Oh really? HOW so? Again, let’s lay it out since it seems believers always pass up the chance to explain in detail, or conveniently forget what the questions were!

If "nothing" be the simpler state, in which an invisible deity could still exist as "spirit" then why "create" a universe? Especially one which would be fraught with violence, despair, "sin" and all the rest. Also one which an ominiscient deity would have to know (IF it was judgmental) that it would have to condemn billions before he even created them. This itself makes the act of creation an act of violence against those created- who would not be able (for whatever reason, including where born) to live up to its standards.)

Thus, we would have to question on an a fortiori basis any judgmental (e.g. “Abrahamic faith”) deity that created the cosmos. It could not have good will at its core, since it would know its act would condemn billions it would have to know about before it even began. Hence, it would be a pre-meditative sadist!Let’s also bear in mind that if an all perfect Being already existed, it would have no need to create at all. It would be complete, perfect, self-sufficient and non-contingent. In effect, by creating it really adds something (universe + imperfection) to itself – that mitigates reasons- for arguments.

So again, to Denis Alexander and any other “Abrahamic” theists:

Why wasn't `nothing' (no creation- ab initio perfect "Being") good enough for the creative force or deity? Why perform an act of creation that renders it imperfect?(Since if "omniscient" or assigned such attribute, it would have had to know before all time that it would create those it would later have to destroy (assuming the afterlife construct of "Hell" - which most Catholics and other orthodox believers do.

We'll be waiting for your answers! In the meantime, Hawking’s spontaneous inception premise makes most sense, since we can square the general level of human and natural evil that abounds in the world with a randomized physical event, as opposed to a supposedly beneficent creator.

Alexander goes on to assert:

"Hawking's god is a god-of-the-gaps used to plug present gaps in our scientific knowledge.”

Actually, not, since most cosmologists who use QM realize now that – given the vast amount of dark energy in the cosmos (more than 73%) a spontaneous inception hypothesis is the only one that makes sense. Creation via intelligent agent certainly doesn’t unless one can explain why it would leave so much of its creation “in the dark”!

Meanwhile, Fraser Watts, an Anglican priest and Cambridge expert in the history of science, says that it's not the existence of the universe that is crucial to proving the existence of God. In his words:

"A creator God provides a reasonable and credible explanation of why there is a universe, and ... it is somewhat more likely that there is a God than that there is not. That view is not undermined by what Hawking has said."

Again, this is bollocks and provides no sound explanation. As I noted above, until all the Abrahamic believers-theists address the why something than nothing issue, they are in the la-la zone and can’t be taken seriously. Given the boundless natural and human evil in the world, the brutal fact that every living thing must prey on others to survive, Hawking’s hypothesis of spontaneous inception makes much more sense than that a beneficent creator started it all.

Using fanciful language to assuage the existential qualms of one’s followers is all well and good, but until one can provide coherent explanations he could as well be talking about cartoons.

Beyond all this, and leaving out the physics, one can support Hawking’s thesis using plain old Bayesian probabilities.

To fix ideas here: let p[S] be the unconditional probability there is a supernatural agent responsible for the creation of the universe.

Let p(S-[BB]) be the conditional probability of the existence of a supernatural agent if the Big Bang has indeed occurred.

According to the principles of Bayesian probability theory (e.g. by Bayes’ theorem) we can write:

In terms of strict adherence to Bayes’ theorem, one can only have:

In other words, the insertion of a “supernatural agent” is redundant. (Note to fundies and other theists: there is a difference between saying something is redundant and something doesn't exist. However, for all intents, for physicists anything redundant in a theory or data stream is usually jettisoned as unnecessary. You already have what you need in terms of data, quantification, so why add something that doesn't advance it? )
Posted by Copernicus at 9:42 AM

In David Mill's book, "Atheist Universe" he points to Dr. Hawkings' mistake in saying that the "universe created itself from nothing," as it would contradict the principle of conservation of mass-energy. What Dr. Hawkings should have said is that the universe created itself from (vacuum-flutuation) energy. Not strickly "nothing," but pretty close...