THE DEVALUATION OF LABOR 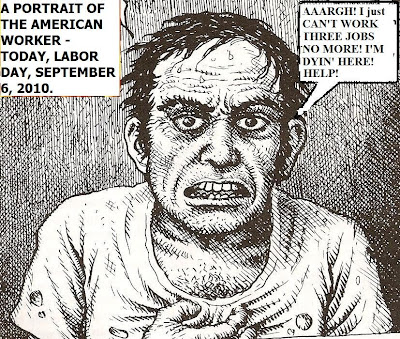 On this Labor Day, 2010, it is well for us all to ponder, irrespective of our place in the labor constellation - whether employed or not - how we came to the sorry pass of American Labor being so devalued. One only needs to do the most rudimentary research to ascertain how far we've fallen since 1973-74. By one measure, as reported by Barbara Ehrenreich ('This Land is THEIR Land', p. 23): "the share of pre-tax income going to the top 1 percent of American households has risen to 16 percent. At the same time, the share of income going to the bottom 80 percent has fallen by 7 percentage points."

But it's worse than that! Those top 1 percent of people and indeed the top 5 %, have made out like bandits since the Bush tax cuts were passed in 2001. As a result, there has been an average transference of $7,000 every year from lower and middle income earners to the top. According to a New York Times piece cited by Ehrenreich: "It's as if every household in the bottom 80% is writing a check for $7,000 every year and sending it to the top 1 percent".

How the hell did things get this bad for middle and working class labor? How has it come to be that now there is such a massive retrenchment of high benefits - high value jobs, while low value service jobs become the norm? It has been a long time coming, but numerous processes were at work, a few of which I will enumerate below:

(1) Cutting employee benefits, i.e. health plans - even after employees have retired with them.

(2) Eliminating defined benefits plans, such as provided standard corporate pensions - in favor or defined contributrion plans (such as 401ks) in which workers are in it for themselves to accumulate adequate savings for retirement.

(3) Cutting wages - either de facto, or through eliminating the unions which protected them (much exacerbated after Reagan ascended to power)

(4) Firing/downsizing workers just before their retirement dates, so the company is free not to have to pay retirement plan benefits, or provide stock options, as per contract clauses.

(5) Re-engineering the workplace to increase its automation factor in order to dump workers, so increase profit margins by not having to pay benefits, etc.

(6) Shipping as many jobs as possible overseas, to places like Bangalore or Beijing, with labor costs barely 20% of what they are in the U.S. and no benefits to factor in.

(8) Identifying older (over 50) workers as 'surplus' so that they can be replaced with younger workers for whom half the wages (or less) can be paid, with fewer benefits. (A recent 5-4 Supreme Court ruling a few years ago exacerbated this by asserting anyone claiming "age discrimination" could not file a suit in standing if that was the only charge)

(9) Eliminating nearly all permanent jobs which carry health and pension benefits, in favor of using 'temping', 'outsourcing' or some other device not requiring benefits. On the academic (university) front, using 'adjunct' professors, hired on a per hour, per course basis, without benefits., and with no possibility of 'tenure'.

(10) Tying health insurance to employment, so that when let go or fired, workers are waylaid again by having to do without critical protection. Thereby driving them into bankruptcy and-or poverty if they should get seriously ill or seriously injured in an accident.

All of these together, in concert, have forced a massive marginalization of the workforce. It is so diagreeable and extensive that it evokes the powerful words of Charles Reich in his book, Opposing the System,p. 22:

"We have built a machine for dehumanization of such force and destructive power, thorough its accumulated assaults on human dignity, that we are creating kinds and degrees of damage to human beings beyond anything ever known, with totally unforeseeable consequences "

And indeed, when one observes workplace killings, especially in the wake of firings - one gets a glimpse into these consequences. Not to say the fired people were "entitled" to get off this way, but that the system of American work itself has so regressed them that they are no longer able to see clearly what their choices are, in situations of desperation.

And don't think for a moment the military is free from this. As I tracked one of the charities to which I consistently donate, I found their main beneficiaries were families on U.S. military bases. That charity was primarily responsible for trucking in loads of free food from pantries to the bases - making the spectacle of military poverty high profile (especially following 9/11 when all entering vehicles had to be stopped for searches outside bases).

"Market forces ensure that a volunteer army will necessarily be an army of the poor. The trouble is that enlistment doesn't do a lot to brighten one's economic future".

She goes on to note the average pay for frontline battle troops (at the time of writing, ca. 2008) was $17,000 a year- "which puts them at about the level of theater ushers and corssing guards". Even 2nd lieutenants only earn an average of $26,000 - "less than most pest control workers and shoe salesmen". Yes, they do get benefits, but these enable families to barely keep heads above water. Also, as Ehrenreich notes, many service men and women have had to use credit cards to purchase kevlar or other protective vests because the Army couldn't afford them.

What kind of nation is this? One in which the labor pool has been nearly totally devalued and debased.

Probably no truer a statement ever appeared than barely 12 years ago, in an issue of Psychology Today no less (July/August 1998, p. 10. Includes graph):

"Starting in the mid-1970s, the nation's quality of life parted company with its wealth, and the gap between social health, and GDP is now bigger than it's ever been."

A graph of 'quality life indices' vs. GDP (ibid.) shows the measured divergence. It also suggests that we are a much sicker society than anyone imagined. The marginalization of the workforce, is surely one major barometer of that. The GINI coefficient, and research disclosing how it portends social and economic disintegration, is another. And bear in mind this awareness was at least ten years before the massive financial meltdown in 2008, which now has 16.7 million out of work and nearly 26 million under-employed. Meanwhile, corporate America continues to sit on a heap load of $867 billion in cash reserves rather than create jobs.

They won't add jobs until "demand rises"- which means consumers buying more. But consumers are keeping their wallets tightly zipped up because they're still de-leveraging out of debt which, as recently as 2007, saw them with an average of $1,400 of liabilities over assets.

Cynical aspects of even remotely trying to reach full employment in the U.S. are seldom mentioned. For example, that a deflationary impetus has been a prime influence in companies cutting back on work forces, because the employment cost is too prohibitive. (Or, using 're-engeineering and re-tooling to replace workers with robots or self-service queues such as at many supermarkets now)

Also, the cost of keeping people employed is seldom mentioned. But, the Federal Reserve even has a statistic to keep track of it: "the Employment Cost Index." It is basically, a per capita index of how much cost is attached to keeping each unit of workers in jobs. This includes benefits, as well as wages and salaries, including overtime pay. The higher this index, the greater the number of employed people. The lower, the more unemployed. Market specialists and strategists do NOT want employment rates high because they inflate the Employment Cost Index, and also:

"Inflation fears are especially acute ..because unemployment is too low. When available workers become scarce, employers must often bid more for their services and then raise consumer prices to make up for higher costs." (The Baltimore Sun, p. 1E Jan. 27, 1997, 'Employment Cost Is a Hot Number').

Economists and Wall Street investment firms have learned that for roughly every 1.3 million people out of work, inflation decreases by 1%. (And the Employment Cost Index, though not necessarily by the same amount).

They also know(as the Federal Reserve Corporation does) that low inflation increases stock prices - which makes more money available to business (though not to their employees, since profits are always invested in new capital - i.e. issuing more shares, rather than labor). The end result is that there is an enormous impetus to eliminate as many good jobs and workers as possible - to maximize a company's stock prices, and enhance capital.

In other words, capital is opted for over labor, and this was the topic of The Judas Economy: The Triumph of Capital and the Betrayal of Work, by William Wolman and Anne Colamosca.

The point is then, that labor is devalued precisely because we live in a "Judas Economy" where capital is revered over it. One of the most disgusting indices as the authors note, is that productivity in relation to GDP has increased more than 40% in the interval since 1973 even as wages-salaries have remained almost stagnant. Of course, one major reason is how "greater productivity" is attained. Often by firing a number of workers and ditching their benefits, and making the remaining force do their work plus that of the downsized ones. OR- tossing out 80% of a workforce and replacing them all with automation.

So much for labor and Labor Day!

Americans, the kings of Bullshit, do a good job of talking it up and pretending like the nation extolls its regular workers. In truth, it disrespects them and the sure sign is how the trade unions have been treated and dismissed since the Reagan era. I leave with Barb Ehrenreich's powerful words (pp. 6-7):

"How many 'wake up calls' do we need, people? How many broken levees, drowned cities, depleted food pantries, people dead for lack of ordinary health care? (Waters poisoned by blown deep water oil wells)......Why don't we dare say it? The looting of America has gone on too long, and the average American is too maxed out, overworked, and overspent to have anything left to take. We need a new deal, a new distribution of power and wealth, if we want to restore the beautiful idea that was America".

A start can be made by allowing all the Bush tax cuts to expire in January. Cuts that are guaranteed to only cause the gulf between capital and labor to grow even more. Instead of keeping those, cuts - take $2.2 trillion out of it to rebuild our decaying and crumbling infrastructure while also putting tens of thousands of people back to work....with full benefits!
Posted by Copernicus at 9:48 AM

Amen. This article should be featured in every newspaper, on every news website, and discussed intelligently on every televised news station. Finally, somebody gets it!