A 'Culture of Dependency'? WHY and HOW? 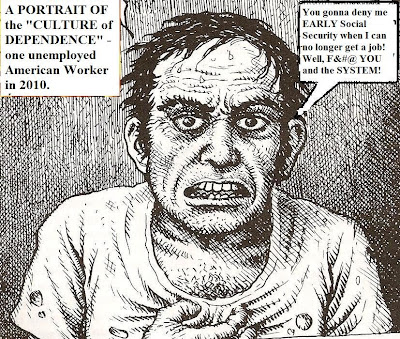 A recent editorial in The Chicago Tribune squawked about a "culture of dependency" as exemplified in the words of one Wall Street Journal piece:

"Nearly half of all Americans live in a household in which someone receives government benefits, more than at any other time in history".

The Chicago Trib editor goes on to point out:

"This is a major change. A generation ago, less than a third of Americans lived in households getting government benefits. The expansion helps to explain why it has gotten harder than ever to restrain federal spending on entitlements : too many oxen would be gored"

Yes, it and may also what provoked the consummate asswipe, Alan B. Simpson, to make his crack about Social Security being a system with "310 million teats". Well, along that line of thought, how about I gore some corporate media oxen along with Simpson? It's well and good to pronounce and cite the increased proportion of Americans dependent on federal benefits, but to be honest one ought to cite ancillary statistics as well, which discloses WHY this may be necessary. For example;

- Wages of American workers, adjusted for inflation, have been essentially static since 1973.

In addition, nowhere do either the WSJ or the Trib point out or say that nearly 12 million Americans are doing UNPAID LABOR in caring for ill family or relatives, who otherwise would be on the government's dole. These include millions of Alzheimer -affected relatives and others with serious disablities. So stop the whining about "entitlements" already!

In addition, no where do either of the above editorials mention that currently 11% of all Americans are doubling up with family, relatives. And the only thing supporting such doubling may be one VA, SS or other paycheck that might permit up to 12 people to live under one roof. 12 people who otherwise would be added to the 3 million homeless.

How did things get so bad? By betrayal! Both the government's betrayal in privatizing and de-regulating to shlep risk onto the population, as well as having lawmakers in the pay of corporate lobbyists and corporations (for campaign cash) and also private companies' betrayal - in shipping millions of jobs to Bangalore and China, while hanging shingles in Antigua or the Caymans to write off taxes! Not to mention:

-Eliminating nearly all permanent jobs which carry health and pension benefits, in favor of using 'temping', 'outsourcing' or some other device not requiring benefits

-Identifying older (over 50) workers as 'surplus' so that they can be replaced with younger workers for whom half the wages (or less) can be paid, with fewer benefits.

- Re-engineering the workplace to increase its automation factor in order to dump workers, so increase profit margins by not having to pay benefits,

- Cutting employee benefits, i.e. health plans - even after employees have retired with them.

In other words, friends, it doesn't take a genius IQ to perceive why so many Americans are now receiving federal benefits, and why this is likely going to have to increase- because so many have been betrayed by those they counted on. Of course, the wolves in the political and corporate system-alliance want no one to see through the screen of their manipulations!

BUT... a sharp-eyed and unapologetic cynic will always understand that when a culture promotes false optimism, pseudo-happiness and illusionary confidence it is inevitably to try and hoodwink the population. (See: Bright-sided: How the Relentless Promotion of Positive Thinking Has Undermined America - by Barbara Ehrenreich) In particular, hoodwinking seems to work best on that segment that hasn't been able to sustain the standard of American economic advancement do often hyped on television, in the magazines and by the pundits in their 24/7 news cycle. As a result they blame themselves for not achieving the levels of success originally envisaged, rather than the political-economic system that undermines them.

The message is invariably: "Hey! If you're not doing well it's YOUR fault!"

And so we again find the imperative of the "Order paradigm" (promoted by political elites and the corporate media) trying to suck the wind from the sails of the Conflict paradigm. In the latter, people are not encumbered by false consciousness permeating their environment and see that the system (in the U.S. - the tandem political-corporate system yielding a corporatocracy) is responsible for keeping them back via an array of means including: i) its tax system, which favors the wealthy and re-distributes income to them, ii) an insurance system which cuts and hedges on protections rather than supports them, iii) a legal system, which more often confers benefits on the wealthiest clients than the poor, and iv) a public education system, which is designed not for critical thought but to manufacture drones for the corporate state. (In Conflict and Order : by D. Stanley Eitzen and Maxine Baca-Zinn, Allyn & Bacon, 1991. )

In the Order Paradigm, meanwhile, the System controls the message and its purpose is the same as when Edward Bernays first enunciated it ('Propaganda’, 1928):

“The conscious and intelligent manipulation of the organized habits and opinions of the masses is an important element in democratic society. Those who manipulate this unseen mechanism of society constitute an invisible government, which is the true ruling power of our country.”

The major role of the system sponsors is to engender and reinforce the myth of personal blame (the so-called fundamental attribution error in psychology). This is defined:

"The tendency to blame individuals for their level of failure or success without considering the aspects of the social structure that impel or impede their progress. Thus, it results in praise of the system and condemnation of individuals who are defined as losers. "

Thus the subtext of all the main media messages focus not merely on the failure of individuals but ignoring the system's culpability in the whole. Jacob S. Hacker, author of The Great Risk Shift: The New Economic Insecurity and the Decline of the American Dream (Oxford University Press, 2006) writes (p. 58):

"Adherents of the Personal Responsibility Crusade have largely adopted strategies of stealth, seeking to transform existing arrangements beneath the radar screen of public awareness. Rather than tear existing arrangements out by the roots, advocates of personal responsibility have mostly worked to chip away at America's public -private framework of economic security, all the while blocking efforts to deal with the growing economic risks that American families face. To see their success thus requires looking for more than dramatic policy upheavals"


Of course, there are dozens, even hundreds of examples, but let's look at a few. One of the major risk shifts occurred in the 1980s with the 401k, under the law by that title. This allowed companies to cease having to provide pensions to workers to life, but rather let workers themselves be responsible for their own retirement security. Now, over 30 years later, barely 35% of corporate workers have defined pension plans - nearly all have morphed to defined benefit plans. Not surprisingly, the greatest proportion of workers that now will have to work years longer to afford retirement are those who had 401ks largely parked in the stock market. (Though it was a well -known fact since its inception, that the 401k was originally designated to be a pure saving vehicle, not an investment vehicle! See: 'The Great 401k Hoax', by Anne Colamosca and William Wolman)

Less well known is the erosion of insurance benefits across the board. What insurance companies have been allowed to do (via the System's process of "de-regulatory fixes") is write in small print to assorted policies under which they no longer have to cover the costs. Or, they can immensely jack up premiums if a policy holder has suffered a major misfortune. In the case of my own parents, following Hurricane Charlie striking Port Charlotte, Florida a few years ago, their insurance premiums spiked nearly 150%. The fact they sustained any damage at all from this Category 4 storm, meant their policy was altered to embed much higher premiums. Their only choice was to put their home on the market, since they could no longer afford the higher premiums on fixed incomes. (They moved into a retirement complex).

In the case of other home insurance, one major calamity may even be enough for a company to drop coverage altogether. Other damage claims, in the form of stachybotrys or black mold, are now no longer even considered. If you have it, you could as well abandon your home since they won't pay you a red cent.

In terms of health insurance, the fixes are so numerous they make the mind boggle, for example, canceling insurance if a certain maximum amount if reached. Or, rejecting a person for coverage if one of hundreds of pre-existing conditions is found. (In the film 'SICKO' one woman's mild childhood illness was enough to have her breast cancer treatments pulled because the insurance company deemed it a "pre-existing" condition she didn't report)

Currently, many tens of thousands of trusting Americans are also paying through the hand, nose and mouth for "Long term care insurance" in the hope that if and when they get Alzheimer's and need to enter a nursing home, it'll be paid for. Well, good luck on that! It's now fashionable for long term care insurers to write so many qualifiers and conditions, sub-conditions into the fine print that a person will be damned lucky to actually partake of what he or she's paid for when they need it!

In terms of the tax system, I already noted how according to a New York Times piece cited by Barbara Ehrenreich('This Land is THEIR Land', p. 23): "It's as if every household in the bottom 80% is writing a check for $7,000 every year and sending it to the top 1 percent".

Thus, redistribution of wealth to the upper crust is built right into the tax code. And now these miscreants are squealing like stuck pigs over the prospect (if the Bush tax cuts expire) they may have to pay 3.5% or so more per year in taxes!

Given how the rich predators have picked the pockets of the poor and middle class for the past ten years, the tune of nearly $7,000 a year - the least that can be done to correct it is to ensure every pocket of those picked is remunerated back in federal benefits! Or, at least it works out that way for those who need the benefits! 44.4% of the U.S. population now depending on federal benefits? Hmmm.....seems to jibe with the 49% who've had their pockets picked by the wealthy since the Bush tax cuts first emerged in 2001. I say...fair is fair.... and fuggedabout changing that!

You want to halt "entitlements" - make sure no Bush tax cuts for them go forward!
Posted by Copernicus at 11:12 AM