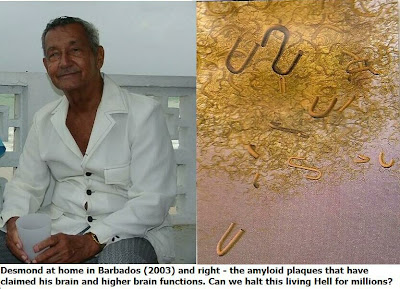 While the fundies and their fellow religious Babbits babble about "Hell" and avoiding "God's wrath" - it's already here on Earth for tens of millions. I saw this first hand on a recent holiday trip to Barbados, West Indies, when my wife and I visited her cousin Desmond. We hadn't seen him since May, 2003, and - following a Saturday night party in which another cousin noted he was in a bad way, decided to visit him.

When I saw Desmond in 2003 at the family vacation beach house, we'd engaged in a long running conversation and debate about the mass limits of stellar black holes and also the estimated mass of the galaxy-gobbling hole at the center of the Milky Way. In the meantime, I was preparing to give a lecture on dark energy at the local observatory, and so Desmond also wanted to know everything about that: How could it be detected? What specific data did one look for? What would be the long term consequences to Earth, and any sentient beings inhabiting planets? Could it affect the expansion of the universe, and if so, how? How much of the universe did dark energy comprise and how much in relation to its counterpart, dark matter?

Desmond (as shown in the photo) was the epitome of a bright, curious and probing mind. Merely seven years later, he was reduced to a hollow shell of a man, and his intellect only a faint wisp. He could barely recall even basic events, far less engage in a conversation about dark energy or stellar black holes. Worse, the prognosis was that his condition would surely degenerate, to the point he wouldn't even be able to wash himself or use the toilet. Within a year or so, he might be reduced to a babbling baby, even as he continued to avoid eating much. He was in the personal Hell of Alzheimer's disease.

Fundies may blather on about death and stoke fear concerning it, but I can tell you now there are things much worse than death and that is the living death that comes with Alzheimer's disease. By the time we saw Desmond, he was barely aware of the toll it'd already exacted on his mind, his intellect. He recalled none of the earlier conversations we had and had never heard of dark energy. His mind was hollowed out, and the most we could do at the time was recall some brief happy moments that we all shared in the past, or recount for him our various travels: to Alaska to see the aurora, to Vegas to play the slots and see the shows, and to Switzerland, to climb the Stockhorn Mountain. He enjoyed all this but more as a spectator instead of an active participant.

Is there any hope to escape this Hell on Earth? Maybe! An article appearing in today's Denver Post notes a recent discovery by Dr. Paul Greengard (winner of a 2000 Nobel Prize for his work on signaling in brain cells) who has managed to isolate a protein: gamma secretase activiating protein, which is a key catalyst used to make beta amyloid- the telltale plaque that accumulates in the brains of Alzheimer's patients.

To further test his discovery of the protein, Dr. Greengard genetically engineered a strain of mice that possessed a gene for Alzheimer's. Greengard, however, succeeded in blocking the gene for the gamma secretase activating protein. All the mice appeared to be perfectly healthy and none developed the plaques in their brains.

Hopeful? Yes, indeed, but it's a vast step between mice and men, and let's not forget the Pharm companies may not be all that enthused to pursue it, given the recent acknowledgement by Eli Lilly that its own Alzheimer drug was found to make the disease worse.

We do hope that a "fast track" emerges for Greengard's finding and a means can be found to develop a drug blocker to the gamma secretase activating protein gene.

It is too late for cousin Desmond, but hopefully not for millions of others who don't deserve the sort of Hell Desmond is now enduring. Or most especially, the family who have beheld his dramatic downturn of intellectual capacity!
Posted by Copernicus at 12:42 PM