In space plasma physics, shock waves are of special interest, particularly what we call collisionless shocks, because they're observed throughout the universe.  For example, they are detected in the heliosphere e.g.  in the digitized image above.

The heliosphere is the bubble -like region of space in our solar system governed by plasma (including the solar wind) blown outwards from the Sun.  The presence of collisionless shocks also appears in the expanding debris clouds of supernova remnants such as those for the Cygnus Loop depicted in the graphic below: 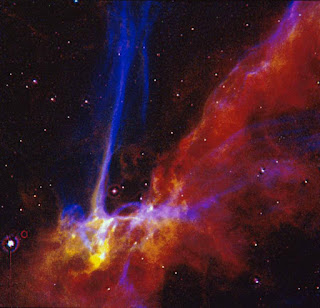 What makes these shocks unique is the low density plasma in which they occur.To fix ideas, in a normal shock wave as the gas compresses, particles collide, i.e. they get so close to each other that their respective electric fields cause them to change direction.
In the space physics setting we often consider shocks as being incited by what we call micro-instabilities. Often cited is the case of an ion-acoustic instability triggering a soliton and shock, for which one has the electron temperature T e  ¹ 0 and ion temperature,   T i = 0 ("cold plasma" conditions), so electrons, with ions are streaming at same speed.
The electron thermal speed is then:  ve (o)2 = 2 T e / me
And the ion sound speed: c(s) =  T e / mi
So that: n(i) =  n(e)/  [1 – (2 e j)/ mi u(o)2 ] 1/2

Where the last is derived from continuity relation: n(i) vi (o) = n(e) ve (o) = const.(With the numbers of ions and electrons identified respectively).Given the non-dimensional constant:

By contrast to normal shocks, collisionless shocks have a gas (plasma) density too low for the particles to interact. They are instead pushed about by turbulent waves that act on much smaller scales.By creating collisionless shocks, say in a laboratory setting, we can conceivably make measurements at a micro-scale that would otherwise be impossible to do in space. And while space plasma physicists have numerically modelled shock formation in the past they have hitherto not been able to confirm the model-based predictions in situ - or through experiments.  Previous lab experiments used pistons to generate shocks in plasmas but these were limited to perpendicular motion and alas, did not propagate away from the pistons. (Later experiments created shocks in lasers or photo-ionized plasmas but encountered problems with magnetizing or ionizing the background).Now,  as recently as 2014,  Niemann et al (Geophysical Research Letters) have succeeded in making measurements of collisionless shock waves in the lab. The authors effectively created an experiment for the Large Plasma Device at the University of California in Los Angeles that used a high power laser to blow up  piece of plastic, creating a cloud of debris exploding into a stationary magnetized plasma.The collisionless interactions created transferred momentum from the debris cloud to the ambient ions, thereby incepting a shock wave that propagated away from the piston.  The UCLA team was then able to plot the shock waves and compare them to their numerical simulations.The data also indicated that microinstabilities (e.g. ion acoustic) play a minor role in shock dissipation. Of course this work will be useful in future studies of the microphysics of magnetized shocks, and we also are confident that now similar in situ experiments can be performed - perhaps using different materials.

As better data become available, including from simulations of real events, we should be better able to model plasma phenomena such as the aurora and solar flares.

Posted by Copernicus at 1:27 PM