Demons Are Real? Yeah - And Ghosts, Elves And Goblins Too - According To Too Many 'Muricans in YouGov Poll 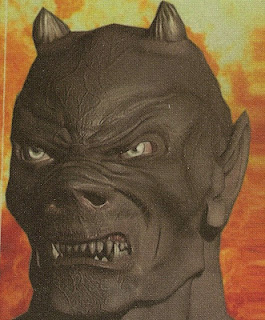 According to a YouGov poll 51% of Repubs Believe Demons Exist 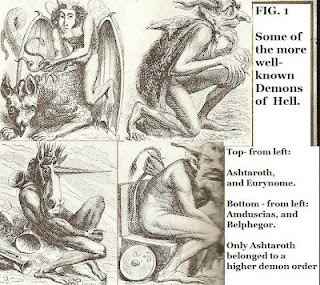 Didn't the Bible have "demons" prancing about in those olden days? Well, uh...no, not exactly! Back then, two thousand odd years ago, psychiatry hadn't even been discovered yet. No one knew a neurosis from halitosis or a psychosis. So when the ancients were afflicted with schizophrenia, bipolar disorder, anti-social disorder and even just simply epilepsy (sending them into paroxysms of rictus and spasms) people of the day naturally assumed "demons" were responsible and possessing the person. What else could they think? They had no coherent science of the mind, or brain! It would be another 1800 years or more before Wilder Penfield would insert electric pens into various brain centers to elicit responses, or Freud would arrive at his remarkable theory of the subconscious.

Now, in the 21st century, however, it appears "demons" are all over the place, at least in too many 'Muricans febrile brains.  According to a recent survey by YouGov 2 in 5 of our fellow citizens "believe ghosts exist" and - wait for it!  - "51% of Republicans believe demons exist" , while 34 % of Democrats agreed . What!?   No wonder the median IQ of the country has fallen 5 points - well, at least since 2016 when Trump was elected. Go figure!

There was at least some redeeming news in the survey:  Those Americans with postgraduate degrees were "less likely to believe in supernatural beings."    Well, at least that's some consolation the whole population hasn't been brain infected.  On the downside, we learn that women who completed a 4-year degree were more likely to believe in ghosts than men with the same education level. From which I can only conclude the women didn't major in physics, or engineering.

Back to the demons. While 1 in 2 Repubs believe in them, along with more than 1 in 3 Dems, only 11 % claim to have actually seen one.  In other words, their belief supersedes their observation.  They have absolutely no evidence for the existence of these entities, apart from slightly more than 1 in 10 who've seen one.  This elicits the question of what form the demon took? Is it akin to the Belial demon at the top?  Or is it one of the demons depicted in the lower graphic, from an anthology of demons?   Or better, perhaps the Repub demon believers who actually saw one beheld Behemoth, e.g. 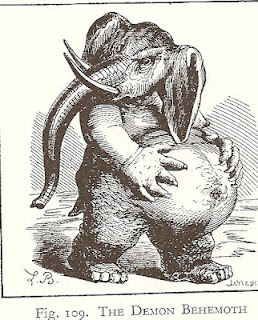 This would make sense as it has an uncanny resemblance to the symbol of the Republican party - which of course has now become possessed by Donald Trump - so is a cult party.

On a more serious note, we now know - in terms of 21st century science - no such things as demons exist.  They are merely inventions, creations of the human brain.  Much credit goes to neuroscientist Michael Persinger who was able to generate micro-seizures in subjects brains ("temporal lobe transients")  that triggered all manner of apparitions.  Persinger also allowed that spontaneous transients could occur resulting in specific "visions" - even of demons.  This is the most probable explanation for the entities observed by the 11 percent in the You Gov survey.

Interestingly, Persinger also was able to show that the beliefs themselves originated in the temporal lobes and they spanned a wide gamut.  But why would a significantly larger proportion of Republicans believe in demons, say than Dems?  I speculate that Trump's emergence  in 2015 and over 30,000 lies in his 4 years in office- programmed more Reepo brains to accept the untrue, the fanciful, even nonsensical.

After all, a good proportion of these Reeps also believe in QAnon rubbish, such as the elite Dems conducting "satanic sacrifices" of infants, drinking their blood etc.  My worry is this demonic garbage spreading if Trump should ever again get into power.

But my bigger worry is the nation itself veering into authoritarian fascism - a real form of demoniality.