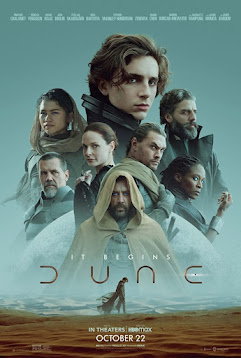 While many people are still loath to go to the movies, at an actual indoor cinema, we decided the release Friday of the new version of Dune was the perfect excuse.  After all,  we'd been cooped up without much entertainment to enjoy since October, 2019. Normally we had gone to see 2 movies a month on average, but since the pandemic began, zero - understandably.

To cut to the chase, if you haven 't been to the movies lately DUNE is the one to see - epic in proportion, magnificent desert scenes rivaling those in 'Lawrence of Arabia' - and superb acting to match.   Special acting kudos go out to Timothee Chalamee as Paul Atreides, Charlotte Rampling as the Bene Gesserit Reverend Mother Mohiam,  Rebecca Ferguson as Lady Jessica,  Javier Bardem as Stilgar, and Josh Brolin as Gurney Halleck.

Director Denis Villaneuve also merits props especially as the film was thrice delayed before getting into theaters this year.It is well worth your time and we recommend the XD experience which literally puts you in the middle of the action and with sensurround sound.

Unsure how many would want to go to the earliest XD showing (11:30 a.m.) on Friday, opening day, we elected to purchase our two tickets online the night before for $10.50 each plus $3.50 tax.  We obtained the verification by email which included a specific   QR code which we scanned on entering the cinema.

To our amazement the theater (No. 17)  at Cinemark was virtually empty so social distancing was no problem at all. If I had to estimate, I'd say perhaps 16 were in attendance altogether - based on eyeballing the number of people exiting (we always stay until the credits end).  In any case we followed the cinema guidelines and wore our masks except while in the theater eating our snacks.

Speaking of which, that was my only complaint, Janice's too!  The concessions were just too damned expensive.  We paid $27.82 for: one medium popcorn, one hot dog ($6.45 alone), a bag of Lays chips, a large diet coke and a bottle of Dasani water  (The film is about 2 h 25 mins. long so we needed drinks for the two of us to last.)

The film itself began before we could get into our seats with the refreshments.  But when we got home we watched the beginning 10 minutes we missed on HBO Max.  The movie lived up to Frank Herbert's complex 1965 novel perhaps more than any other version - including the 1984 movie by David Lynch (starring Kyle MacLachlan as Paul Atreides) and the Dune miniseries.

Lynch's version was marred by over emphasis on the repugnant Baron Harkonnen with his oozing sores, grotesque aspect and abominable habits (slurping and licking at his slaves' faces before consigning them to horrific ends).  Its redeeming features - including scenes of how the Spacing Guild folds space after using spice  and Paul Atreides (Maud'Dib)  riding the giant worms - were lost in all the gratuitous violence, debauchery and flying pus.

The Dune miniseries was much better than the 1984 version, in our opinion, and we plan to watch that again, fairly soon.

We expect any prospective movie goer would also have read Frank Herbert's superb novel first. Also note this film ends with Paul being accepted by the Fremen, and a Part 2 is planned (filming next year) to conclude the adaptation.

Posted by Copernicus at 6:33 AM