The  "economy over all" pressure purveyors - for anyone who's been reading the reactionary financial press (and even some mainstream media) -  are out in abundance. The common theme of these impatient  Trump trolls,  quack doctors and econ-driven pundits is that we "cannot afford"  to keep the shutdown going (now affecting 41 states with 9 dumbo states still opting out).  The argument is basically a take off on Trump's earlier bilge that the "cure can't be worst than the disease".  Well, uh, yes, it can - if you have a nation that blew every opportunity to get the national outbreak under control. This indeed, is the curse of having Trump & Co. in charge as they've blown it from the get go.  For two weeks downplaying the threat, then  failing to act to get sufficient ventilators, then doing nada - in actually coordinating medical supplies- while the states tried to outbid each other for N95 masks and ventilators.  All this while we beheld a daily spiel full of lies, exaggerations and happy talk designed to lure the stupid and gullible into letting their guards down  See e.g.

Even this morning Trump was at it again, lying through his teeth, insisting the federal gov't is rushing supplies to hard hit areas. But notably dismissing an inspector general's report  (released Monday) showing hospitals are lacking critical supplies and dealing with long delays in waiting for coronavirus test results.  As per his M.O. Trump tried to  spin the IG report as "politically biased", never mind it was based on interviews with 323 hospital administrators.  Trump actually said in response to pressure for more testing (CBS, this a.m.): "We're the federal government, we're not supposed to be standing on street corners doing testing."

Actually, sonny, that's pretty close to what you should be doing if you have any intention of getting the economy out of its medically induced coma. Because without testing, without knowing where the virus is - who has it - including the millions who are infected but asymptomatic (and spreading it),  any ambition to reopen the economy is dead in the water.

Even worse, and like your typical snake oil salesman, Trump has been shamelessly pushing the anti-malarial drug hydroxychloroquine, often making  reckless comments literally pulled out of his fat ass.  ("What do ya have to lose?")  The bombastic buffoon even had the temerity to interrupt Dr. Anthony Fauci -  when a reporter at the presser yesterday asked if there was any evidence the drug actually worked on the virus. Dotard,  believing himself to have more expertise than Dr. Fauci, blabbed at the reporter (WSJ, today, p. A4): "Do you know how many times he's answered that question? Maybe 15 times! You don't have to ask that question!"

But he does need to ask that question,, and of Dr. Fauci himself, when the nation is confronted by this orange maggot's exaggerations and  con man hype day in and day out - at these briefings - which are merely glorified campaign rallies in miniature.  So this human refuse is literally playing with thousands of American lives with his insane narcissistic maneuvers, spinning and refusal to take any responsibility. If we hit the million death mark you can blame this asshole.  See e.g.
Drug pusher Trump has a share in the malaria drug he keeps over-selling for COVID-19

Making matters worse, and effectively acting as accomplices are the numerous pundits, editorial writers and columnists trying to apply pressure to open things up - while downplaying the risks of premature economic moves in any or all states. For example, there is the WSJ's Holman Jenkins, Jr. ('Was Dr. Strangelove an Epidemiologist?')  where he trots out a guy named Joseph A. Ladapo (of UCLA) who claims in a recent op-ed that "the shutdowns if prolonged will only make matters worse."

Adding that even when restrictions are lifted "we will emerge right back where we started.... and no matter what our hospitals will still be overwhelmed."

Says who?  One is left to wonder where this quack came by that "Eureka" brain fart. But it surely must have made little Holman's own Eureka moment to find such an outlier clown to help him make the case we need to ditch the shutdown ASAP for the sake of our economy. (A position the same day WSJ editorial ('The Shutdown Crash Arrives') vigorously supported, observing "the anti-virus strategy is putting millions out of work"

Sadly, neither the WSJ editors, or Jenkins Jr. or William McGurn (e.g. today) , Kim Strassel and others in that 'hurry up and open the damned country" orbit get it.  That opening prematurely without millions more tests is a colossal fool's errand doomed to backfire, and badly.  In contrast to Jenkins et al at least one WSJ columnist (Greg Ip) seems to get it, writing in his own column ('Uncertain Path of Virus Poses Its Own Risks', p.  A8):  "These days excessive confidence should be greeted with skepticism".

And particularly when used as part of a coordinated PR ploy to push an end to the shutdown (which isn't even nationwide given 9 states are still playing roulette with their residents' lives).  Again. without testing - we are flying blind- and we can't know how many are actually infected in this country, and how many others they are likely infecting and how many hospital beds, ICU space and ventilators will be needed to cover all bases.  As Elizabeth Rosenthal asked in a recent NY Times piece:


How can we know when to reopen society without testing many more people?

The framework for this answer is tied inextricably to the fact that this virus is  not only insidious (in that it can hide among a large segment of the populace who have few or no symptoms) but also the exponential nature of its spread. I.e. 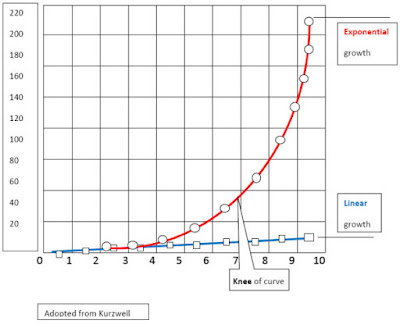 As described by one knowledgeable WSJ columnist ('The Power of Exponential Growth', p. C4, April 4-5):

"Exponential growth is dangerous because if each person infects more than one other person, the spread of disease quickly becomes overwhelming. Multiplying by 3 for instance. it only takes 21 steps to reach 10 billion, more than the current population of the world"(7.75 billion)

Therein lies the key that too few of these econ -pushing pundits, columnists and editorial writers get, and why all the rosy blabber about ending this threat in weeks or months is Pollyannish poppycock.

Those in search of a  more realistic assessment and answer to Ms. Rosenthal's question can do no better than Zeke Emanuel (oncologist and Vice Provost for Global Initiatives at the Univ. of Pennsylvania)- who put it in stark terms for the economic chauvinists and humpers last night ('Last Word') :

"Realistically COVID -19 will be here at least for the next 18 months or more.  There will be no normalcy until we find a vaccine or effective medications.   I know that's dreadful news to hear. How are people supposed to find work if this goes on in some form for a year and a half?   Is all this economic pain worth trying to stop COVID-19?

The truth is, we have no choice. Prematurely ending the physical distancing and the other measures, the deaths could skyrocket into the hundreds of thousands if not millions. We cannot return to normal  until there's a vaccine. Conferences, concerts, sporting events, religious services, dinner at a restaurant, none of that will resume until we find a vaccine, a treatment or  a cure.

One thing I've learned as a cancer doctor is that it's wrong to paint an overly rosy picture in order to maintain a patient's hope.  Because it fails, it's false.  Biology and disease are formidable opponents that inevitably tell us the truth.  We cannot reieve the oppression of this pandemic until we are realistic. So we need to prepare ourselves for this to last 18 months or more and for the toll it will take, We need to develop a long term solution based on those facts. It has to account for what we are losing as this fight goes on.

Lawrence, this crisis is not going to go away in a few weeks or when the thirty day plan comes to an end. Although  COVID-19 is affecting us in different ways, and we have to be up to it and fight together.

When things do open it will probably first be schools because  younger people are more likely to be protected, less likely to die. But that has to be on a voluntary basis. But we can only do that opening when we have testing and the right public health infrastructure.""

The preceding ought to be read and re-read for anyone mesmerized by Trump's  happy talk B.S., false hope blather.   In conjunction with the above, you might also wish to check out the description of this virus'effects on the lungs - by Dr. Kathryn Dreger (NY Times, last week).  Therein she writes:

"It causes a gummy yellow fluid, called exudate, to fill the air sacs, stopping the free flow of oxygen. If only a few air sacs are filled, the rest of the lung takes over. When more and more alveoli are filled, the lung texture changes...  These machines  (ventilators) can’t fix the terrible damage the virus is causing, and if the virus erupts, the lungs will get even stiffer, as hard as a stale marshmallow.

“I feel like I’m trying to ventilate bricks instead of lungs,”  is how one intensive care unit doctor put it.

The heart begins to struggle, begins to fail. Blood pressure readings plummet, a condition called shock. For some, the kidneys fail completely, which means a dialysis machine is also needed to survive. Doctors are left with impossible choices. Too much oxygen poisons the air sacs, worsening the lung damage, but too little damages the brain and kidneys. Too much air pressure damages the lung, but too little means the oxygen can’t get in. Doctors try to optimize, to tweak.....

Even among the Covid-19 patients who are ventilated and then discharged from the intensive care unit, some have died within days from heart damage"

The preceding horrific 'drowning' effects -  and equally desperate treatments -  are worth avoiding even if only a minority of citizens might endure them.  And that means keeping the economy shuttered down - as the sensible Europeans have done  (WSJ, 'Europe Freezes Economy, Willing To Pay  Price',   March 27, p. A9).

The alternative of opening businesses too soon will be too horrible to contemplate and in the end be self-defeating. That's because such premature opening will lead to a second (and likely worse wave) of illness, with an even longer "medically induced coma" for the U.S. economy.

Our best option now? Follow the lead of the Europeans,  or better  yet, New Zealand,

And not be suckered by the bollocks of either Holman Jenkins, Jr. or his pet toady doc (Ladapo)  willing to provide specious cover for his codswallop.


COVID-19 and the Failures of Capitalism

Analysis: At least half of covid-19 patients on ventilators don’t make it


A Day Without Donald