After seeing the latest Quentin Tarantino movie ('Once Upon A Time ...In Hollywood') this past week, I grew curious concerning what the critics might think about his incredible alternative history ending. (Actress Sharon Tate and companions on Cielo Dr. live, while the Manson family's would-be butchers are butchered themselves, by the film's two fictional anti-heroes,  Rick Dalton and Cliff Booth)  As the movie mavens at The Atlantic describe it, after noting the film had been "relatively peaceful" up until the final 30 minutes:

"Then comes the end of the movie, and the end of the movie’s relative peacefulness. Three Charles Manson followers—who, in reality, went on to kill five people, including the actress Sharon Tate—break into the home of the washed-up actor Rick Dalton (played by Leonardo DiCaprio). These would-be slaughterers end up being slaughtered by Dalton and his stuntman Cliff Booth (Brad Pitt), who employ an attack dog, a flame thrower, and a myriad of household objects that get slammed into faces. This flip of history triggered cackles of glee in my theater. It has also inspired wide speculation about Tarantino’s intent. What is the point of this ornate, ahistorical violence?"

Of course, like most critics this writer overthinks.  Personally, I suspect that most of the critics who blew gaskets about Tarantino "rewriting history" or "disrespecting it" never cracked open a book (or scientific paper) dealing with parallel universes     ( e. g. 'Parallel Universes' by Fred Wolf) ) or the Many Worlds hypothesis of physicist Hugh Everett.  This is a pity given many books on the former are widely available and Everett's Ph.D. dissertation is also available online as a PDF document..  Readers can get a small preview of the controversial ending below:


The Ending Of Once Upon A Time In Hollywood Explained
In my humble opinion, one of the less histrionic takes on the ending was delivered at this website

The point of Once Upon a Time in Hollywood's twist ending, explained ...

An even more spot on take appears herein:

The ending of Once Upon a Time in Hollywood explained - Looper

"Even before the Manson family begins its attack at the end of Once Upon a Time in… Hollywood, there are certain key differences establishing the alternate universe in which the film takes place. For one thing, Linda Kasabian drives away immediately rather than waiting in the car for the murders to end; for another, 18-year-old Steven Parent (who was visiting the groundskeeper that night and was shot in his car by Tex Watson) is nowhere to be found around the Tate house or the street outside. The biggest difference is that the Tate murders as a whole never take place, of course, but these key details establish the bigger ripple effect even before that crime is avoided.


What else changes in this new timeline Tarantino has established, one in which Tate doesn't die and Polanski doesn't come home to a slaughterhouse? What does Joan Didion write about if not the Manson murders and subsequent trial? Does Bruce Lee, whose legend also looms in the film, somehow also get to survive his own tragic early death just three years later? Do the Beatles ever learn about Manson's strange interpretation of their lyrics?"

Is Tarantino a quantum physicist at heart?  A cosmic string theorist? Maybe not. Maybe he just wanted to create a revenge fantasy as another critic conjectured.  Getting back at the Manson garbage via a movie with plenty of vindictive splatter at the end. (A clip of Cliff's pit bull Brandy tearing into  Manson toadie Tex Watson's gonads is one for the ages.)  But the fact that alternate universes are consistent with physics and its speculations, means it is not outrageous for Tarantino  - even if by chance- to have integrated such an alternate ending into his film.   It further means that the critics who yelp about "debasing"  or "revising"  history have no leg to stand on; no more than if they were to bloviate at me for writing a sci-fi novel  e.g

In which the alleged JFK assassin (Lee Harvey Oswald) in our universe  exists as a noted 79-  year old Emeritus Professor of Physics specializing in Quantum  Entanglement at LSU, in a parallel universe. And who -  by very clever means - finds a way to clear his counterpart's name in our universe by ingeniously  exposing the charlatans of the Warren Commission Report and its supporters and propagandizers.

Now it is true that  parallel universes have not yet been empirically or observationally  validated. However,  physicist David Deutsch has devised an experiment to detect the interphasing of one with ours.

In his book The Fabric of Reality (pp. 38-47), Deutsch adopts the setup (Fig. 2-4) of a monochromatic light beam that passes through successive screens with single holes.  The image presented on the screen is a central bright spot with darker penumbra around it. With a two slit pattern for the screens (p. 41) the experiment becomes more interesting in that successive barriers to generate the patterns engenders what Deutsch calls  "shadow photons".

He acknowledges (p. 45) that "tangible" (i.e. measurable) photons are grounded in our tangible, current universe, but also that shadow photons can be thought of as collectively coming from a parallel universe.  He then clarifies this in mind-blowing fashion (p. 45):

"For it turns out that the shadow particles are partitioned among themselves in exactly the same way as the universe of tangible particles is partitioned from them. In other words, they do not form a single, homogeneous parallel universe vastly larger than the tangible one, but rather a huge number of parallel universes, each similar in composition to the tangible one, and each obeying the same laws of physics, but differing in that the particles are in different positions in each universe."

In other words, using the graphic  I've shown below for an idealized model : 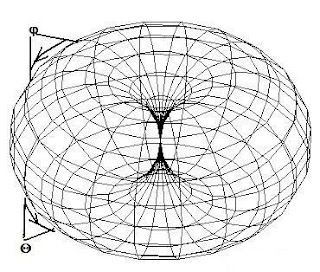 We would need multiple ordered pair angles (Θ, φ)  to actually lead to an incomprehensible number, thereby denoting all the shadow photons in one of Deutsch's experiments.  In the graphic, I show an "idealized multiverse" replete with parallel universes, each occupying longitudinal geodesics specified under a coordinate φ, and separated by uniform angular measure Θ from adjacent universes. The whole represents a 5-dimensional manifold in a toroidal topology. The topological space of the hypertoroid cosmos can therefore be represented by the global state space, a product of absolute hypertorus coordinate time (Θ) and 'all-space'(φ):GL = Θ X φ

The existence of this multiplicity is what Deutsch uses to justify the term "multiverse",   with which I concur.  I reiterate that this is an idealized model which assumes that N-cosmi were incepted at equal intervals of time - as manifested by the equal spacing in Θ. In principle, we don't know a priori how "close" in complex time another parallel universe may be to our own. When one uses the assumption of "equal time intervals" between inceptions in our idealized multiverse, one isn't stating what those times are, and so they could be minuscule - and the smallest time unit imaginable is the unit tau, τ. (About 10-43  s, and note Θ = f(τ).)

As an example, let two parallel universes be distinguished by a 1-τ difference in fundamental time parameter, viz. [1 + 2τ] and [1 + 3τ], then we would require for connection, a mapping such that:


The potential for interweaving is what would allow Deutsch's experiment to be performed.


As for the assorted complaints over Tarantino's ending, for once I do agree with something author Stephen King said, "It rocks!"    The critics, meanwhile, need to bring themselves up to speed on the parallel universe concept.  And note, even if Tarantino didn't consciously invoke it, the plausible existence of alternate universes means the critics are hoist with their petards.