The Aurora - The Linchpin Of Space Physics 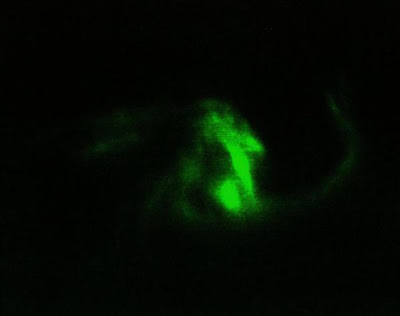 In Alaska in March, 2005, I took the above photograph of an auroral display just outside Chena Hot Springs, Alaska. I was glad my wife was with me to behold the sight (her first time) since it later evolved to an exciting electronic scene with bursts of red and green interacting and changing positions.  An even more impressive image is shown below: 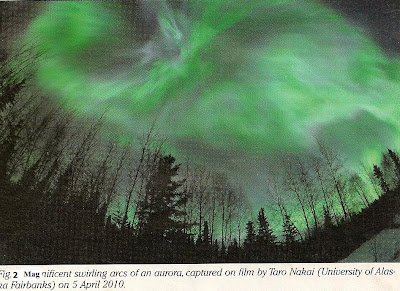 While the aurora is a fantastic sight, few may realize that it also has served as a spring board to detailed studies of near Earth plasma - treated as magnetic storms. But mote on this in a bit.

How are these magnificent displays caused?

One can visualize the Earth as a giant spherical magnet, with magnetic field lines extending from its north to south magnetic poles, e.g.

These magnetic field lines have the property that any charged particles (+protons, - electron or ions) that approach from the Sun, will spiral along them.

The Earth itself is "bathed" in the solar wind, a stream of high speed charged particles that flows into space, originating from the Sun's corona. (A hot, gaseous envelope that spews these particles out continuously – moresso when there is a violent explosion known as a Solar Flare)  Around the Earth the speed of these particles can reach 400- 500 km/second. (Because of its high temperature, over a million degrees, the corona gas is ionized so must consist of charged particles, mainly (+) protons, and (-) electrons).

As this discharge occurs, one or more outer electrons is stripped from the atoms, for example from oxygen in the atmosphere - then recombines again - to form new (e.g. oxygen) atoms.

With this recombination - there is accompanying emission of light, for a certain part of the visible spectrum   For example, in the case of recombination of oxygen atoms - their emitted light is in the green region of the spectrum, such as seen in my photograph above. The remarkable red aurora is produced by emission at the 630 nm (nanometer) line of oxygen and at relatively high altitudes (e.g. 200-600 km) compared to green - which tends to form below 100 km and the oxygen line at 557 nm is excited.

Auroras can display as both diffuse and discrete. In the first case the shape is ill-defined and the aurora is believed to be formed from trapped particles originally in the magnetosphere which then propagate into the lower ionosphere via wave-particle interactions.

Thus, multiple- colored auroras can be explained by emissions from different atoms in the upper atmosphere, mainly in the region of the magnetic poles. This is also why, of course, they are more often seen in the vicinity of the N, S magnetic poles.

A great analogy has been given by Prof. Syun Akasofu-  former Director of the Geophysical Institute in Fairbanks, AK - who compared the generic aurora to an image on a TV screen. In this case the (polar) upper atmosphere corresponds to the screen and the aurora to the image that would be projected on it, say for a cathode ray TV. The electron beam in the TV  corresponds the electron beam in the magnetosphere. In the conventional TV motions of the image are generated by the changing impact points of the electron beam on the screen. Similarly, with the aurora, its motions – such as moving sheets or curtains- are produced by moving impact points of the magnetospheric electron beams.

In gauging the power and intensity of auroras at different times, it is useful to remember that ultimately the aurora derives its power and potential from the Sun and specifically the charged particles of the solar wind. This is why the most spectacular displays are usually near sunspot maximum. Around those times the currents I noted earlier are “amped” up – no pun intended- to 106  A or more. To give an example, during a quiet Sun interval (like we are in now)  the residual power for the magnetospheric generator is on the order of maybe a tenth of a megawatt. If we see a new cycle coming on and solar wind activated – we may get that power up to a million megawatts for a few hours.

In light of the above, it would be no exaggeration to say the aurora is the linchpin for the discipline of space physics. Generically, "space physics" refers to the study of plasmas that occur in the region of Earth's atmosphere. The most accessible (and visible) such plasma we know of is the aurora .

While computer simulations and numerical analysis have dominated auroral studies, such as at the Geophysical Institute of the University of Alaska, there are also space-based techniques which have provided significant data to refine the simulations as well as auroral- magnetic substorm models. At the University of Alaska - Fairbanks, for example, the Poker Flat rocket range serves as a critically important means to acquire plasma data from the plasma itself.  The image below shows the team assembled for one of the missions: Readers interested in many more details of the Poker Flat rocket operations to do with auroral studies  can go to this link: 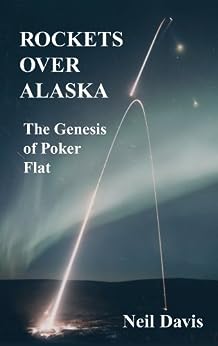 A less well known mode of auroral study entails injecting electrons artificially using a space -borne accelerator.  Few are aware that NASA has previously flown devices that have fired beams with energies of a few to tens of kiloelectron volts (keV).  In a new study, Marshall et al (Journal of Geophysical Research, Space Physics, 2014) have used computer simulations to explore the capabilities of a small but powerful particle accelerator positioned at an altitude of 300 km and aimed at the atmosphere.

This space-borne accelerator would feature energies three orders of magnitude greater than the actual ones already used by NASA. Thus, it would be capable of generating a beam with particles in the 0.5 - 10 MeV range via pulses lasting 0.1 microsecond and carrying 0.1 amp of current. The simulated specs for the device are based on the Compact Accelerator for Space Science (COMPASS) currently being designed by the SLAC National Accelerator Laboratory and the nonprofit research institute SRI international.

The authors note that deploying such a device would offer many scientific opportunities to study the behavior of particles in the upper atmosphere. We'd see, for example, the paths of injected electrons trace out the arcing field lines of Earth's magnetic field - illustrating how they bend and snap during intense geomagnetic activity caused by magnetic storms.

We'd also see how visible, aurora-like emissions would be generated as the particles descend into the Earth's atmosphere and strike atmospheric molecules. Make no mistake this is exciting stuff especially for those involved in space physics. If such a particle accelerator could shed more light on magnetic substorms it would be more than welcome.

How does space physics approach the aurora?

Given the aurora is basically regarded as a magnetic substorm we use what are known as "substorm models".  In most current ones some dynamo action is required which sends currents to specific regions to provide a Lorentz force: (J ⊥ X B) where J ⊥   is the vertical current density and  B  the magnetic induction associated with the system.. At a particular altitude then, these J ⊥ currents can trigger a substorm. In the proper space physics (magnetospheric) context, a “neutral wind” arises from a force associated with the neutral air of the Earth’s atmosphere  This force can be expressed:

where f is the collision frequency.If one solves for f above, and uses the magnitude of magnetic force (F = qvB) where B is the magnetic induction, and v the velocity one arrives at two horizontal flows for electrons and ions moving in opposite directions. mU f = qvB = (-e) vB = (e) vB

A terrific articulation of this process can be found in a paper by Syun-Ichi Akasofu ( Auroral Substorms: Paradigm Shifts in Research', Eos Transactions, Vol. 91, No. 31, August 3, 2010, p. 269) wherein the author points out:

"The transfer mechanism of solar wind energy to the magnetosphere...is now known to be a dynamo process that converts the kinetic energy of the solar wind to electrical energy on the magnetopause - because most auroral and geomagnetic phenomena are various manifestations of energy dissipation processes."

This amounted to a brilliant recognition of the energy aspects but more work needs to be done, especially in developing self-consistent models for "loading" and "unloading" processes.  These refer to two distinct energy paradigms, the B-v (driven) and E-J . In the former observations of the magnetic field and motions govern the models, in the latter it is the magnitude of currents or current densities (J ).

One of the most intriguing discoveries of recent decades has been the identification of auroras on Jupiter.  A major difference is that unlike Earth's auroras, those on Jupiter are nearly continuous - driven by the planet's rapid rotation and its volcanic moon (Io),  which spews out sulfur and oxygen ions as well as electrons into space, The latter speed along the planet's magnetic field lines and - if powerful enough - slam into the atmosphere causing its particles to glow.

One of the highly enhanced images of Jupiter's aurora is visible in the Hubble Space Telescope photograph below;

Only recently Tao et al (Journal of Geophysical Research -Space Physics, Oct. 2015, p. 1002), using the Japanese Hisaki Space Telescope, measured variations in the brightness of the Jovian aurorae. They reported observing two kinds of auroral pulses. In one, the aurora brightened for up to several days at a time, and the authors attributed this to the solar wind. Thus, as it 'washes over' the planet, the charged particles are buffeted and compress Jupiter's magnetic field. This is very similar to what happens on Earth.

The team also observed much more rapid variations, with pulses typically lasting less than ten hours. By comparing the Hisaki images with images taken simultaneously by the Hubble Space Telescope, Tao et al could see these variations arose from the aurora brightening at lower altitudes, at the bottom of the auroral arc and as reported by Kimura at al (op. cit.)

Using Hisaki's onboard spectrometer, the Tao team was also able to estimate how fast the electrons were traveling on the basis of how deep in the atmosphere the light originated. They found that when the aurora flares up it's not because faster, more energetic electrons are penetrating deeper into the atmosphere. It is instead due to the overall increase in the number of electrons.

All of this indicates that Jupiter's most intense auroras occur when plasma is suddenly injected into its magnetic field, most likely from Io.

The aurora is a fantastic phenomenon for detailed plasma study that has not only aroused awe in Earthbound observers, but prompted the timely development of sophisticated space-based methods of detection.