A Nobel Prize In Literature for Bob Dylan? Give Me A Break! 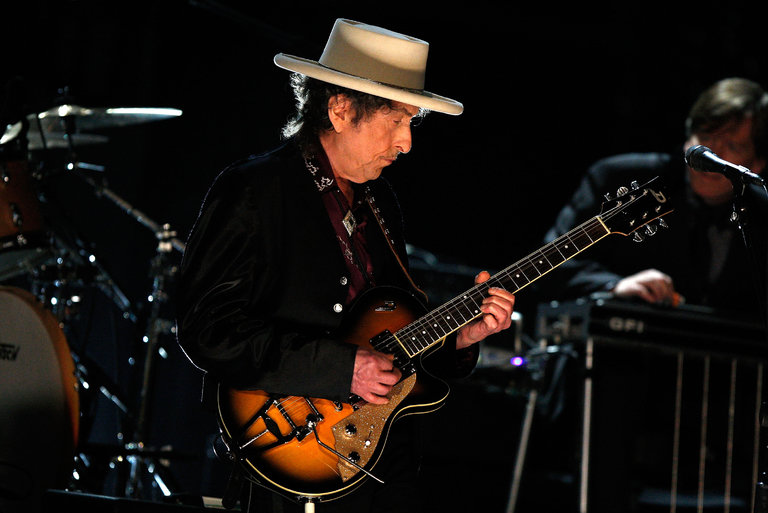 Okay, let's get serious here: Bob Dylan is a great musician, one of my favorites from the 60s and the Vietnam War era - who's earned many kudos e.g. for songs like 'Blowin' in the Wind' and 'Hey, Mr. Tambourine Man'. . But a Nobel Prize in literature? No way, that's like awarding the Nobel Prize in Physics to Bill Nye, the Science Guy for all his popularizing contributions over the years. Nye's popular expositions have been useful to advance public learning and appreciation but don't warrant a Nobel. Not when so many excellent physicists like Steven Weinberg and Arthur B. McDonald might be waiting in the wings. In the same vein, Dylan's popular rock songs have done much to advance consciousness - using a musical medium - but don't warrant a Nobel, even given his more recent work.


"Yes, Mr. Dylan is a brilliant lyricist. Yes, he has written a book of prose poetry and an autobiography. Yes, it is possible to analyze his lyrics as poetry. But Mr. Dylan’s writing is inseparable from his music. He is great because he is a great musician, and when the Nobel committee gives the literature prize to a musician, it misses the opportunity to honor a writer.

As reading declines around the world, literary prizes are more important than ever. A big prize means a jump in sales and readership even for a well-known writer. But more than that, awarding the Nobel to a novelist or a poet is a way of affirming that fiction and poetry still matter, that they are crucial human endeavors worthy of international recognition"


Many will object, but the truth is that reading is taking a hit, and a celebration of actual literature would have signaled respect for reading, without conflating it with music or entertainment.  Yes, folk rock hits like Dylan's as well as Joan Baez, did do a lot to implant peace memes in a war era, but they succeeded because of also being entertaining and great to listen to. Be that as it may, there were a number of worthy candidates the Nobel Committee for Literature could have considered, including:

Most Americans would not have heard of any of these, but that's the point. They might, on learning of the award, been enticed to read their works.  Moreover,  no black authors have won the Nobel since  Nigerian Wole Soyinka in 1986.  So why give it to a 75-year old white guy who has accumulated all the fame he needs?

In fact, I would argue that Margaret Attwood deserved the Nobel in Literature before Dylan,  simply for her novel,    'The Handmaid's Tale'. This was  a cautionary future tale about what transpires when evangelicals take over the U.S. government, outlaw abortion and force pregnant women to carry to term - or be severely punished.

Each of the above, in my humble estimation, would have been  more suitable for a Nobel Literature award than Bob Dylan.  The Literature Prize has also often gone to writers who have been punished for fighting for civil rights, and all three (Ko Un, Adonis and Ngugi ) have been imprisoned.  Adonis and Ngugi have both lived in exile. What has happened to Dylan? Was he sent into exile in Canada for trying to avoid the draft in the 1960s? Nope. Was he ever imprisoned for taking a stand? Nope.  He just produced some terrific poetry set to music for which he merits props and maybe another special music award, but not a Nobel.

The Nobel, in whatever area -  let us agree - represents the ultimate 'winner take all' prize. That win is nearly entirely invested in fame and gravitas that can propel a hitherto unknown career to greater heights. The ultimate 'winner take all'  aspect means you don't award it to a guy who already has a ton of (music) awards and all the global recognition one can conceive.

Beyond that I have a problem with awarding the Nobel to a guy whose work you can just listen to on an Ipod. How difficult is that? Reading any good literature ought to take time and effort, and also compel the reader to put his smart phone away at least for a bit to commit to the page. No selfies, no texts, just reading the masterful work of another. Giving the Nobel to a glorified rock singer does nothing to change that, and believe me the percentage of readers is getting lower.

As recently as two years ago The Atlantic’s Jordan Weissmann noted:

The reported last week that nearly a quarter of American adults had not read a single book in the past year. As in, they hadn’t cracked a paperback, fired up a Kindle, or even hit play on an audiobook while in the car. The number of non-book-readers has nearly tripled since 1978.”

This is absolutely incredible! But it also helps to explain why so many polls taken recently appear to show the mindlessness that Thomas Jefferson worried about in terms of citizen responsibility. A lot of this mental regression is tied to the retreat from a literary culture highlighted by Neil Postman in his book,  'The Disappearance of Childhood'.    As far back as thirty years ago Postman warned how adult Americans were apparently regressing in mentality toward childish pastimes and preoccupations.

Postman’s main contention (so germane today with the digital youth generation) was that only adults are privy to the secrets locked into the printed word. If a supposed adult wanted to emphatically separate himself from the world and concerns of the child, he had to demonstrate it mentally - by his reading fare. That meant accessing a realm in printed material that the child mind wasn't equipped to process or understand. Tweet and snapchat all you want and "friend" a million buddies on Facebook, you're still a de facto, intellectual child.

Now, go read the first chapter of  Tolstoy's 'War and Peace'. If you succeed - meaning you can answer comprehension questions about it later- we will reconsider your status. (University degrees may or may not count given how inflated most grades are today, because of the teacher evaluation system).  Any person can basically access an electronic medium if they apply even minimal effort.  That includes cell phones, tv, video games and twitter. Any person- even a ten year old kid-  can also employ those media to blab nonsense, gossip or indulge in aimless chatter. But what defines the adult mind is whether it can tackle a serious print work such as William Shakespeare's King Lear.

In his Chapter Seven (‘The Adult Child’), for example, Postman lays out a summary of his thesis on the disappearance of childhood in tandem with defining the modern conception of “adult” and what it has evolved (devolved?) into after the emergence of video culture. As he puts it, the modern idea of the adult “is largely a product of the printing press.” Further, almost all the attributes we associate with adulthood “are those either generated or amplified by a literary culture”. These include:


- A capacity for self-restraint

- A tolerance for delayed gratification

- A sophisticated ability to think sequentially and conceptually

- A preoccupation with both historical continuity and the future


Want to know in a nutshell why the Trump backers are so devoid of facts? Well, consider all the attributes above and ask yourself when was the last time you recall seeing any embodied in the Donald.  This is a character who wouldn't even read his daily press briefs during the primary campaign. (He might now, but given how many red herrings he's spouted one wonders.)

Postman then goes on to note that as electronic (visual) media assumed center stage “different attitudes and character traits come to be valued and a new, diminished definition of adulthood begins to emerge”. This new stunted version of the adult reaches its apotheosis (nadir?) in the adult child having arrived with the television-video age - which primary characteristic flattens out all differences between ages. (If Postman were alive today he'd doubtless identify Trump as the ultimate "man child".)

In other words, one required literary heft and markers - say in ability to read weighty fictional works(like James Joyce's Ulysses , or Milton's Paradise Lost, or Leo Tolstoy's War and Peacce) to finally separate adults from children, adult minds from childish imitators.  Thus, literary culture and mature works provided the truest litmus test to distinguish an adult from a child. Coloring books? Not so much because any kid of five or six could do that.  Today, we are lucky to be able to see the average adult read even light fictional fare, say like Jonathan Franken's 'Freedom', or Don De Lillo's 'Libra'.

The Nobel Literature Prize award to Bob Dylan did nothing to stanch the flow of millions to more electronic - social media titillation, net addiction and twitter, selfie storms. It did nothing to halt the flood of more adults to what my psychologist friend Pat Banister called the "child subculture". That enclave where magical thinking and fanciful flight from reality reigns, and too many adults prefer the refuge of coloring books to reading a book like Franzen's 'Freedom'.

The Nobel Lit Committee muffed it  by giving its award to someone who didn't need it, as opposed to a long time writer whose recognition might have spurred greater interest in actual literary fiction.. In effect, the Committee snubbed all real writers, including the ones listed above. Whether people will take even less time to read as a result of this snub  remains to be seen. What we do know is there is an exponentially increasing obsession with electronic devices - whether for 'Pokemon GO', distracted texting or just watching youtube videos of kittens punching doggies.

The Nobel cognoscenti had the golden opportunity to introduce people around the world to the vast diversity of literature they might access - say via a Google search.  In effect, providing the potential to enhance their mental maturity as opposed to feeding more childish obsessions. Instead, the Literature Nobel went to a guy mainly known for 50- year old folk rock songs that have already propelled him to multiple music awards including the Rock and Roll Hall of Fame.

A sad day for those who appreciate genuine literature and would have liked to have seen it recognized!