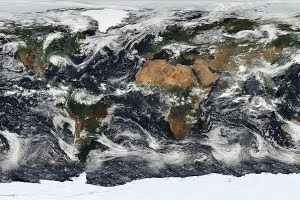 While it likely wont change the minds of hardcore global warming deniers (whose minds are basically made up anyway) a new study published with the cooperation of the Colorado State University last Monday definitely sheds new light on the role of clouds in climate change. The study, published in Nature (which most deniers believe to be part of a "global conspiracy", sic) actually involved contributions from climate scientists (real ones) at CSU, Scripps Institute of Oceanography, Lawrence Livermore National Laboratory and the University of California- Riverside.

The main takeaway? One of the most profound changes incepted via a warming climate - the massive redistribution of clouds all over planet Earth. This redistribution or shift such that sub-tropical dry zones have been expanded by between 20 and 30 degrees of latitude in both hemispheres, and also in the third dimension (of height) by raising cloud tops. The overall effect to make global warming worse.

According to Joel Norris, one of the lead authors and based at Scripps:

"As global warming occurs, there's now the expectation that the storm track will shift closer to the pole and the dry areas of the tropics will expand poleward."

However, the northward shifting of storm tracks (e.g. hurricanes) was not the only change observed. The tops of clouds were also reaching higher into the atmosphere but leading to counterintuitive results based on differential altitudes.

According to Norris, quoted in a recent Denver Post piece ('The World's Clouds Are In Different Places',  July5, p. 14A):

"An increase of CO2 leads to cooling of the stratosphere, so as it's cooling down the troposphere underneath is warming up. And so that means as the clouds rise up they can rise up higher than they did before."

It helps here to get a visual perspective by invoking a simpler thermo-mechanical system, say  using a gas entrapped by a container and a moveable piston-  being gradually heated from below, e.g. 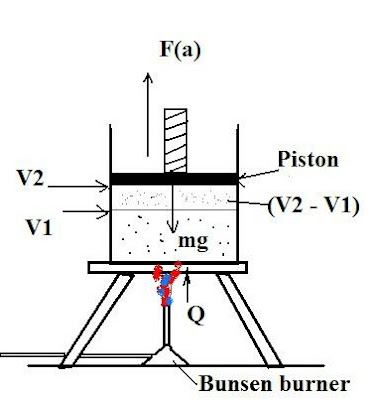 such that when heat (Q) is applied (added) using the Bunsen burner, external work W (= P(V2 – V1) ) is done in expanding the contained gas and hence pushing the piston upward. From the First Law of Thermodynamics :

In like manner, the clouds referenced by Norris play the role of the piston in the simple system, and the warming of the troposphere is analogous to the warming that raises the 'piston'- clouds.

It is important to point out here that these actions were long expected to occur based on the theory of our understanding of the physics of the atmosphere.  I also hasten to point out the actual atmospheric physics is lots more complex than I depicted in the simple system. For example, one would have  to include factors such as 'Rossby radius of deformation', and how the Earth's rotation bends the path of winds (Coriolis force).   The point is that the expectation has long been based on sophisticated climate simulations coded from the fundamental equations that govern the physics of the atmosphere.

Now, we looked at two changes above: 1) greater dispersal of clouds in latitude, i.e. cloud tracks - storms moving toward the poles, and 2) increased cloud heights. In fact, the new study shows that both of these represent positive feedbacks to climate change, meaning they tend to enhance and magnify it.

The movement of cloud tracks poleward enhances warming because at higher latitudes less solar radiation strikes the Earth so the white clouds are reflecting less of it out to space (away from the planet) than they would if closer to the tropics.  At the same time, the increased altitude of clouds result in a thickening of the total column of cloud, e.g. as they pile up (think of multiple pistons in the simple system pulled up one against the other). This then means more trapping of infrared (heat) radiation which would otherwise exit into space.

Of course, explaining this to a climate change denier, say like that Reepo House "Science" Committee Chair Lamar Smith, would be like trying to teach differential calculus to an ape. As we know, Smith has now dragged the Union of Concerned Scientists before a haphazard kangaroo court assembled to quiz them - about holding ExxonMobil accountable for its decades long climate change deception. A deception that's even managed to hoodwink otherwise brainy folks like Kort Patterson, an editor of Intertel's Region 7 NL.

One can only expect a farce from this at least on a par with the farce of the Warren Commission!
Posted by Copernicus at 1:39 PM