Greens' Jill Stein: Right About Bernie's Movement Having "No Place" In Democratic Party? 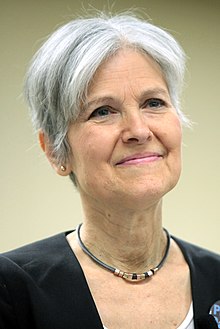 Green party presidential candidate Jill Stein, making a play and plea for Sanders' supporter to come on board.

I was astonished to read in the online Washington Post last night (after the Convention) that Jill Stein was in Philly and making pronouncements outside the Wells Fargo Center to the effect that Bernie's supporters ought to give up on the Democrats.  Jill Stein, of course, is the Green Party candidate for President and she basically said that the Democrats' own actions (including the disgusting  DNC emails) showed that there was no place for a movement such as Bernie's. She then made the case that the more natural place  for "Berners" was with the Greens.

This is a reasonable issue to examine so let's do so. First, IF there is a real place for Sanders' left political movement in the Dem party would they have done everything possible - from the email content and super delegate system- to derail his campaign? I do not believe so! Hence, check off one solid debate point for Ms. Stein.

Next, IF there is a real place for Bernie's energetic supporters in the formal Dem party would Hillary have moved to the center right and named a Neoliberal Wall Street crony as Veep? The answer again must be 'No'.   In fact, I am convinced the naming of Kaine as Clinton's VP pick, a guy known to be against just about every progressive initiative and position, shows the formal Dem Party has zero use for Bernie's people - never mind all the inflated rhetoric last night.

Let's now take a trip back along memory lane to see how and why this distrust of the left emerged and even reached a pinnacle of disrespect during the first Obama term when his aide Rahm Emmanuel sat down with liberals and referred to them as "fucking retarded" for not fully getting behind the Prez' Neolib agenda. See e.g.
https://shadowproof.com/2010/01/26/rahm-emanuel-liberals-are-f-king-retarded/

Real liberals have hated him ever since and also seen Obama for what he really is, a Neoliberal in the disguise of a liberal.

Back to the Democratic Party's genesis of distrust for liberals. This likely commenced with the McGovern presidency in 1972, when the Ds made a big bet and lost to Nixon. They vowed never again to be put in such a position, just as after Mondale's drubbing in 1984 by Reagan led them to confect the center right mutation known as the Democratic Leadership Council, i.e. "New Dems" (read Neoliberal Dems).

To do an end run around future true liberal candidates they implemented a gaming of election rules as well as creation of a "super delegate" system to put a final imprimatur on any "outsider".  True liberals then took stock and decided not to be railroaded by fear ever again. Hence, when Gore showed he disdained liberals by picking the odious neocon Joe Lieberman as running mate in 2000, the most diehard liberals either stayed home or voted Ralph Nader. They are still blamed for "handing the election to Bush" despite the facts that: 1) more than 200,000 Democratic voters voted for Bush in Florida (vastly more than the 57,000 who voted Nader) and 2) Jeb Bush himself knocked over 100,000 black voters off the voting rolls using Choicepoint listing them as felons.

But these election mutations have been minor compared to the rapid move of the entire D Party to the Right which I discussed before, e.g. in my post of May 31. wherein I cited a quote by Noam Chomsky:

“There used to be a quip that the United States was a one-party state with a business party that had two factions: the Democrats and Republicans—and that used to be pretty accurate, but it’s not anymore. The U.S. is still a two-party state, but there’s only one faction, and it’s not Democrats, it’s moderate Republicans. Today’s Democrats have shifted to the right,”

Chomsky's insights are spot on, and as I've posted before, the only reason some perceive me as a Marxist Socialist or "communist" (as opposed to FDR-JFK style liberal) today is because: 1) Their own positions have shifted radically right and 2) they're unaware how the political spectrum shift has been warped by propaganda, revisionist history. (Such as the Rightist trope that JFK was "really a cold warrior" and 'fiscal conservative' when all the evidence indicates this is balderdash,

The Dem mutation toward corporate elitism began when they embraced Neoliberalism via the Democratic Leadership Council  (DLC) in the Reagan era, and 'Fix the Debt' by 2010.  The Party effectively became Republican lite – though they've always tried to make us believe they’re the 2nd coming of a new progressivism. Which is humbug.

Obama, far from being a true liberal, is merely the latest exponent of this Republican lite thinking, as evidenced by his earlier backing of cuts to Social Security, his support of the TPP, and - his proposal for Medicare cuts (putting more of the expense burden on beneficiaries) in his last budget proposal.

But people, most, are not fooled. I don't know - as I told Janice - whether the fear of Trump will scare enough Sanders' supporters into "getting Dem religion" but Hillary and the Dems certainly haven't helped themselves. Also, as we saw last night with the outpouring of raw emotion for Sanders, when you rope in millions of people - many new to the political system - beware of catching them "on fire" because at the end you may not be able to put all of it out.

The dilemma for the Dems is what to do about Bernie's movement and supporters. If they disrespect them like Emmanuel did then look for them indeed to take their passions to the Greens. Whether they will in this election - pulling the lever for Jill Stein - remains to be seen. A lot depends on how Hillary and her new Veep conduct themselves in the coming weeks and what they say. As one Sanders' supporter put it in the comments following a NY Times piece:

'Hillary needs to change her policies to cater for them or lose them. It's as simple and fair as that. And yes I know the Trump arguments all too well. But Hillary, if you want Bernie supporters votes, they don't come automatically based on fear of Trump being the alternative. You are going to have to earn those votes with progressive policies (like banning fracking and other critical environmental issues), just as Bernie had to earn his votes."

http://www.smirkingchimp.com/thread/david-swanson/68262/dnc-now-less-popular-than-atheism
Posted by Copernicus at 7:40 AM