The 'STAR TREK' Universe Is Definitely Preferable To Star WARS 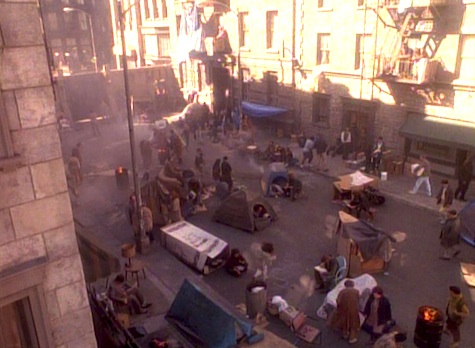 With a new (50th anniversary) Star Trek movie  ('Star Trek Beyond') due out later this summer, and another Star Wars flick in the works for December, it's interesting to compare the two background universes.

The latest issue of FORTUNE ('Star Wars vs. Star Trek',  July, p. 30) continues the debate on which film (and TV in the case of ST) franchise is superior to the other in terms of how it depicts the future, for that universe. As a long time fan of both, I can easily say Star Trek's future for humanity is better hands down.

As the piece observes, while the Star Wars universe "is the ultimate example of an ineffective bureaucracy leading to a worse dictatorship (from the capital of Coruscant), "the United Federation of Planets (Star Trek) governs in the spirit of democratic socialism".

NO issue there, and the cornerstone two-part episode that really seals that discussion is Deep Space Nine's "Past Tense" Part 1 and II. (Which I have watched three times already, so compelling is it).

From the Wikipedia intro we learn:

"The crew of the Defiant is thrown back in time to 2024 on Earth. The United States of America has attempted to solve the problem of homelessness by erecting "Sanctuary Districts" where unemployed and/or mentally ill persons are placed in makeshift ghettos."

Let me note, and I put in the odd spoiler here, the actual future and history recorded for this ST universe  (bearing the United Federation of Planets)  was not the one into which Cmdr. Benjamin Sisko and his cohort were thrown. (See, e.g. 'The Star Trek Encyclopedia: A Reference Guide to the Future'   by Michael Okuda et al.)     No, they ended up in a twisted history version (thanks to the influence of "chroniton particles")  that never should have happened. Hence, they end up in a San Francisco where the super rich have it nice, and the 99 percent are unemployed and tossed into enclaves called "sanctuary districts" where they are basically offered only minimal resources and forced to prey upon each other.

The Wiki entry ends by noting:

" as this episode was finishing production an article appeared in the Los Angeles Times describing a proposal by the mayor to create fenced-in "havens" for the city's homeless, to make downtown Los Angeles more desirable for business. The cast and crew were shocked that this was essentially the same scenario that Past Tense warned might happen in three decades, but was now being seriously proposed in the present"

Which even thirty years ago showed we were already on the Neoliberal arc that would bring us to the horrendous present moment of inequality in which the top 40 odd billionaires in the U.S. own as much as the bottom 60 percent.

The rectification of the hideous past on offer in 2024 in the 2-part DS-9  episode, then led to the proper democratic socialist future portrayed in numerous episodes of Star Trek (and of the series, from the original, to Next Generation, to DS-9, to Voyager).  As often explained by one or other of the primary characters (e.g. Capt. John Luc Picard, Capt. Will Riker, Cmdr. Sisko) "the citizens of the Federation home planet (Earth) know no want. Everyone who wishes has employment and others are able to turn their free time into artistic pursuits. Education is free - though one must qualify in an exam to enter Star Fleet Academy- and there is plenty of food to eat.

One needs to watch hundreds of episodes to get at the bottom of the reasons for this fortuitous outcome which is essentially based on three major pivots: 1) The proper education of the citizenry so they are not fooled by PR, disinformation or the lies of self-interested politicians, 2) The intelligent control of reproduction so that the population can never grow to outpace resources, and 3) Technological advances that serve the bulk of the population, and which render continual development of war materials unnecessary.

Other relevant points made in the FORTUNE article:

- While some alien races (like the Ferengi) still covet coinage, money went the way of the dinosaur.

An added side point made (with reference to the new book, 'Trekonomics: The Economics of Star Trek') is that "finance is virtually obsolete and resources are abundant". The latter is likely on account of development of mining of ores, etc. from asteroids and other planets. The former likely because the planet is no longer caught up in cycles of deprivation and debt, owing to manipulations of markets and greed heads proliferating - as they do in the Neoliberal system. Thus, it's clear the future Earth of Star Trek is not under the 'market uber alles' boots of Neoliberals.

By contrast, what do we behold in the Star Wars universe? From the FORTUNE article:

- Take one look at the lavish lifestyle of Coruscant vs. the scavenging ways of Rey on Jakku and it's clear that inequality is rampant.

- Lots of cool tech exists but hasn't made its way to the people of the Earth or other planets yet.

Clearly, to me, while both universes may be entertaining in the framework of their respective movie franchises and characters, etc., it is the Star Trek universe most people I know would rather live in. Trumpies, of course, would naturally opt for an emperor and an empire as portrayed in Star Wars.
Posted by Copernicus at 6:54 AM