Don't Be Misled By "ISIS" Jabber - Orlando Was A HATE Crime 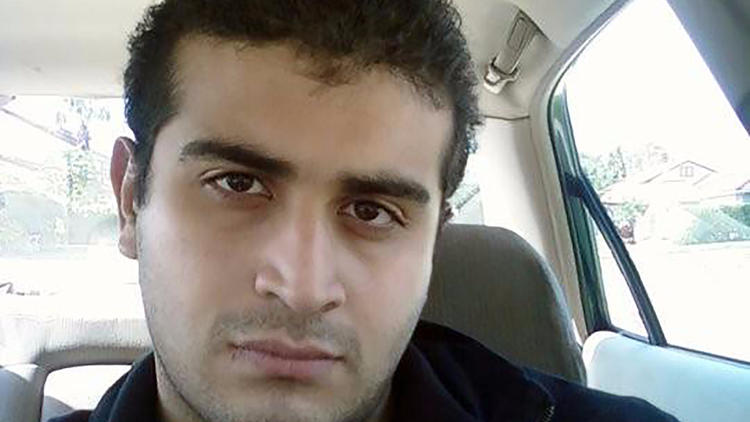 Omar Mateen, the sick homophobic nut who butchered 49 in Orlando.

Some of the assault weapons depicted in a WJS piece from December 15, all of which need to be banned.

Another merciless slaughter, this time by a hateful psycho named Omar Mateen taking out 49 lives at an Orlando nightclub called "the Pulse" according to the NY Times. But you can bet your sweet bippy most 'Murican gun lubbers won't do diddly or squat about controlling the proliferation of military assault rifles. Oh no! They will likely  invoke the recycled excuse that "guns don't kill people, radical Muslim extremists do". A neat cop out but even if they expand the "Muslim extremists" to "people" it still doesn't work because they conveniently ignore the corollary:

That's the core of it: the ease of killing another with a weapon that doesn't even require you get up close and personal, like using a machete or knife.  If gun sales and distributions were as limited in this country as they are in others, Mateen might not have been able to carry out his foul deed to the extent of 49 dead -  - say if he only had access to a knife. Yes, he'd likely have inflicted damage - maybe killed even a dozen -  but there would at least have been time for others to react - to dodge the knife thrusts and take him down. Especially if people swarmed him en masse.

We know from Pete Williams' (MSNBC) report yesterday this AMERICAN  thug (American citizen, born in Queens, NY like 'the Donald') modified his AR-15 to enhance his capacity and thereby kill more people. As the WSJ piece  from which the top image was culled observed:

"The AR-15 re-cocks itself immediately after firing. The only thing keeping the gun from firing again on its own is a sear, a piece inserted in the gun that stops the cycle from continuing. By replacing the sear and a few other key components, an AR-15 can be made fully automatic."

Evidently then, the twisted SOB adjusted his weapon to become a mass slaughter machine.  (We also know from the WSJ piece one of the rifles used by the San Bernardino CA duo had been "changed to more easily accommodate a large capacity magazine". This was according to Meredith Davis, a special agent with ATF quoted in the article.)  Although dedicated gunnies insisted the San Bernardino pair accomplished their foul deed even with "strict" California gun laws, the truth is they aren't that strict. As the WSJ piece continues:

"There are ways to get around the state's background check gun laws. A person can lend another person a gun for as long as 30 days without having to run a background check."

"Many transfers between family members are also exempt from background checks>

So the laws are not as tough as believed with those loopholes, another of which is that "once a gun is sold it becomes difficult to keep track of it". And let's also bear in mind while the wacko Right screams its collective lungs out over the government "eliminating the right to bear arms", they keep their mouths totally shut over all the freaks on the terror watch lists who are still enabled - by current gun laws- to purchase any weapon they want. Cognitive dissonance anyone?

We also know the hateful AMERICAN shit was in Miami a few weeks ago when he "saw two men kissing'" and immediately vowed retribution "from the ISIS kill book", which punishes such behavior with instant death.  I mean sheesh, gimme a break! While awaiting check-in for our Barbados apartment in April (and while Janice was in the restroom) I sat in the check-in lounge while barely five feet across from two young Brit millennial women deep kissing each other on a couch. Did I freak out and want to blow them away? Of course not! There is such a thing as "live and let live" but don't try to tell that to some of these hateful, religiously-motivated  peckerwoods  - whether the gay-hating Mateens of the world, or the Planned Parenthood hating likes of Robert Lewis Dear. .

So we can conclude it was both an act of terror and act of pure hate, but one suspects much more of hate - with an admixture of "Isis" baloney tossed in for good measure. That's because the PoS realized the very word "ISIS" stirs utmost fear into the hearts of millions of Americans - who are then forced to check for "radical Islamic extremists"  under their beds each night, like many 1950s 'Muricans used to do for wayward commies. . So why not invoke it to make the terrified segment believe it was "ISIS inspired"? Hey, don't disregard it!  The cynical use of this tactic (and bear in mind anyone can say anything, that doesn't prove it) provides an effective cover for the hate crime (directed exclusively at the LGBT community). As other commentators have pointed out, the use of this ideological identification instantly inflates the nut's self-importance. Much as the U.S. inflates ISIS' own self-important by branding them an opponent in a real war. Gimme a fuckin' break already! As former Col. Lawrence Wilkerson has noted ISIS are a band of rogue criminals and should not be inflated to the level of "warriors".  This asshole Mateen is also a criminal- not a fucking warrior- and a nut besides. In effect he's no different from Robert Lewis Dear (who fancied himself a "warrior for babies")  other than the religion professed..

An FBI investigator in Orlando yesterday morning also pointed out that a cell phone call was received from the culprit while inside the Pulse club, claiming allegiance to ISIS. This last minute "claim" - despite the fact the FBI did multiple prior background checks showing no threats - indicated to me the little fuck exploited Islamic terror as the cover to commit a hate crime (and an act of domestic terror). The foul little scumball probably knew he could get away with it because too many Americans will accentuate the "radical Islamic terror" aspect and neglect the hate beneath.  As I noted earlier, the irrational fears (by which I mean disproportionate) are already there. Trump will exploit this evil act to the hilt on that score, but no one else of sound mind ought to.

As President Obama said in his address on TV yesterday "The killer was filled with hatred". And this has been true of all the major mass shooters, whether James Eagen Holmes, Adam Lanza, or Robert Lewis Dear.  Each may have been wacked out to different degrees (especially Dear who was "fightin' for the babies") but we need to bear in mind one can be a fruitcake and still express hate and vitriol.

Underneath all these kinds of violent mass shootings is the easy availability of guns. Semi-automatic killing machines like the AR-15, to be specific.  Now after the most massive slaughter ever, what are we going to do about it as a nation? Are we still going to insist - as the NRA does - that those who wrote the 2nd amendment actually had modern military assault rifles in mind when they wrote it? I can tell you right now this is a damned fable! If one of the authors of the 2nd came forward in time to behold how his writing was twisted he'd likely scream: "You fucking idiots! THAT is NOT what we meant by the right to bear arms!"

In a worthwhile book entitled 'Gunfight: The Battle Over the Right To Bear Arms in America', a professor of constitutional law at UCLA - Adam Winkler- masterfully documented how guns were regulated from the earliest days of our Republic. As an example: laws that banned the carrying of concealed weapons were passed in Kentucky and Louisiana in 1813, in Indiana in 1820 and in Tennessee and Virginia in 1838. Similar laws were later also passed in Texas, Florida and Oklahoma.

The then governor of Texas in 1893 was heard to proclaim:

"The mission of the concealed weapon is murder. To check it is the duty of every self-respecting, law abiding man".

WOW! How times have changed!

Meanwhile, Winkler showed that congress passed the first set of laws regulating, licensing and taxing guns in 1934. Though the law was challenged and wound up in the Supreme Court, in 1939, the crazies lost. FDR's Solicitor General framed the argument correctly to the Court:
"The Second Amendment grants people a right that is not one which may be utilized for private purposes but only exists where the arms are borne in a militia or some other military organization provided by law and intended for protection of the State."

The SC decision was unanimous.

While this sane and sober take prevailed for several more decades, it started to unravel by the 1970s as various Right wing (wouldn't you know?) groups coalesced to challenge gun control based on spurious "private gun ownership" interpretations, and successively overturned laws in state legislatures - much like the abortion opponents are doing now.

And let's not forget that Chief Justice Warren Burger once asserted that the alleged right to keep powerful weapons in one's own private possession was  "one of the greatest pieces of fraud on the American public by special interest groups that I have ever seen in my lifetime."

Well, it's good Justice Burger didn't live long enough as to see the arrival of automatic weapons and the claim that the 2nd amendment provided for the ownership of those too!

Over twenty years ago Australia also suffered its worst mass shooting ever but opted to take action. There followed new gun laws that included having to get a license to own a gun just as you would a car. Each time a person makes a weapon transaction, even using a 30.06, the license number is taken down and entered in electronic records. The electronic data base for all of Australia then keeps track of a given gun's history and chain of ownership Why isn't that done here? I mean, it's no more an "invasion of privacy" than already occurs with internet use. So why not (certainly) for semi-automatic weapons like the AR-15, or Bushmaster .223.

The fact is the only reason the gun lobby and its lackeys protests is that they see ANY incursion or limit on their insane ownership "rights" as an incentive to knock out the entire 2nd amendment. In other words, the classic slippery slope argument expanded and inflated to absurd exaggerative dimensions.

But in the wake of Orlando, it's now time for good men anywhere and everywhere to raise a hue and cry for our so-called reps to do something, and not just continue the status quo that's brought us hundreds of mass shootings since 2011. Worse, until our elected reps get off their asses nothing will change.

We now also know the most likely profile for a loser-hater as given by a psychoanalyst on CBS Early show in the wake of the Orlando massacre. The "cocktail" for lethality includes:

- Indications of hatred for others

- Pattern of blaming others

- Use of violence against others

The last was most important, and as she observed:

"When you add all these things together but you don't have access to lethal weapons you cannot act out as violently as we saw."

In other words, we need to keep the weapons away from these hater-loser psychos!

New FBI leads have disclosed Mateen (born in Queens, NY NOT Afghanistan) expressed support for both Al Nusra and ISIS, which are diametrically opposed Islamic groups. Again, this discordance shows the guy was a hateful fruitcake as opposed to any kind of 'radical Islamist' - who one would think could keep his Islamic cults straight!

A new Quinnipiac poll presented on MSNBC shows 6 of 10 Americans support a ban on AR-15s and other semi-automatic assault weapons and 9 of 10 want background checks.

http://www.smirkingchimp.com/thread/p-m-carpenter/67648/a-psychotics-freedom
Posted by Copernicus at 7:21 AM