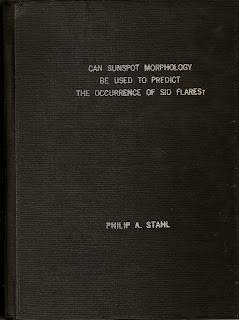 Front cover of my 400+ page thesis, and me (ca. 1981) recording magnetic classifications of sunspots, estimating their areas using a solar graticule.

In a recent issue of Physics Today (May, p. 47) we learn ('Developing Physics Identities') of the various tracks to establishing a "physics identity".  The one that most caught my attention was "When you have your own ideas and your own project. Basically you're working on something not having been spurred by someone else telling you to do it."

After passing two 3-hour physics qualifying exams for the M. Sc. degree,  I was asked by my adviser whether I needed "ideas for the thesis". I told him 'no, thanks', as I had already been working on a problem of my own for the past two years. This concerned how one might use morphological and magnetic features of sunspots to predict geo-effective events, specifically flares that incepted sudden ionospheric disturbances or SIDs.  Thus, my thesis was born, leading to no fewer than six published papers in peer-reviewed journals- twice as many as any other staff members in the time.

The title of the thesis became: 'Can Sunspot Morphology Be Used To Predict The Occurrence of SID Flares?'  and had been  subsequently advanced for  Ph.D. submission at my advisor's request after the publication of the first 3 papers. Exemption from the oral exam followed but the conferral of the Ph..D.  was delayed by one outside examiner (from Sweden) to "enable further observational work via the Solar Optical Telescope" (Not the Hinode one!).

Alas, after 1 1/2 years the SOT was terminated in the NASA budget under GOP pressure - and with Reagan's military expenditures already reaching $1. 7 rillion, leaving the Ph.D. still born. See e.g.

An M.Phil. (Master of Philosophy) higher research degree, next thing to a Doctor of Philosophy or Ph.D.,  was awarded instead.  This despite the fact my thesis had produced no fewer than five papers based on original work and insights. And at 401 pages (including 68 pages of Appendices) the thesis was more substantial than most doctoral dissertations - and with more published papers engendered.

The strategic basis and motivation for my work was originally published in a paper appearing in The Journal Of the Royal Astronomical Society of Canada, e.g.

The stand-alone authorship is especially important because it discloses the person's ability to write a full scientific paper on his own, and have it published professionally. This proof alone qualified me for Full Membership  (as opposed to 'Associate') in the American Astronomical Society, despite not having the Ph.D. (My 2011 monograph, 'Selected Analyses in Solar Flare Plasma Dynamics' is the equivalent of the doctoral dissertation that never was, i.e. had the thesis been so accepted without the need for the added SOT inputs).

Not long after writing the first four chapters of my thesis, they appeared in distilled form, in two lengthy papers published in Solar Physics, e.g.

And a somewhat shorter paper that followed, e.g

Given all the material in the papers was basically from my thesis, the only elements not prepared by me (in the 2 co-authored papers) were the assorted final (publication ready) graphs and line diagrams. These were prepared by my thesis advisor (Dr. A. Achong) since he had the special technical implements to do the quality figures required. (This was for Solar Physics. ) The JRAS - for my original paper given above - didn't have these technical drawbacks and could convert ordinary black ink line drawings-figures to page compatible ones, hence I drew all those myself).

At times it was amusing leading up to the papers' submission, because I had to bring Achong up to speed on the statistical basis for the papers (e.g. Poisson distributions in the 2nd) and the physical basis for the interpretation in the first, i.e. using vector magnetograms  to support a mutual polarity intrusion leading to enhanced magnetic field gradient and higher probability of solar flare. However, Achong insisted his name go first because he was my advisor and "How would it look otherwise?"

Never mind, the ability to conceive and forge a project of my own - an extended, original work with numerous data sets and parameters - showed me I irrevocably qualified as a solar physicist. This project also sealed my identity along with my contribution to perhaps the most monumental space and solar physics project ever undertaken, The Solar -Terrestrial Predictions Workshop e.g.


The massive effort saw the input from over two  hundred solar and space physicists covering every aspect of the problem of solar-terrestrial interactions, including: long, medium and short term solar  forecasting, associated  geomagnetic activity and auroral (substorm) forecasts, as well as ionospheric predictions.

My paper on the statistical limits to solar flare prognostication appeared on pp. 276-284 of the Proceedings and received much attention from the other contributors - since of course it impacted in multiple ways on their work as well.  The paper followed from the last  two chapters of my thesis and was based on the concept of a Poisson-based “delay time” for build up of magnetic free energy,  first postulated by me in early 1984,  for application to “SID” (sudden ionospheric disturbance-generating) flares, with the release attendant on a change in initial free magnetic energy (E m = B2/2m ) given by[i]:

where the first term on the right side embodies footpoint motion, and the second, joule dissipation, but with Jms the current density at marginal stability – since the marginal stability hypothesis is required for a driven process, and h an  is the anomalous resistivity. In the same paper, it was shown how the flare distribution corresponds to a Poisson process of the form P(t) =    =   exp (- l)   lt  / t!, where theoretically the Poisson mean rate of occurrence is: lm =   l Dt, , with Dt  = t,  assuming the time interval Dt  = 1d. In reality, measuring constraints (say achieving uniformly equal time intervals between successive Mt. Wilson magnetograms), will usually ensure  Dt ¹ 1d, so  Dt  ¹  t  thereby introducing a selection effect variability, complicating computation of P(t).

It was also suggested, but not proven, that variability in l arises from  variability in vertical magnetic gradients (Bz) and critical changes in the associated current density at marginal stability (Jzms) such that:  d(Ñ(+ Bz) ) Þ d JzmsÞ dJz  ( dt)/ dt where Jz  is the vertical current density associated with putative footpoints magnetic induction (+ Bz ) and rate of change in |Bz| modulated by significant evolutionary changes (dt) in the lifetime of the magnetic field, especially critical if   dt < Dt.


Since magnetic gradients and associated scale lengths (ℓB) also will change in time, there would be scope for accepting a Poisson process of form P(t) =  =   exp (- l)   lt  / t!  which would embody an energy modulation with some inbuilt variance, with the latter having to be known to determine how much energy might be released and when. In other words, the differing scale factors inevitably introduced variabilities that were difficult to account for. The Poisson statistics therefore had to be able to take these differing modalities into account.

Below: Photo taken after being awarded the M.Phil. in Physics