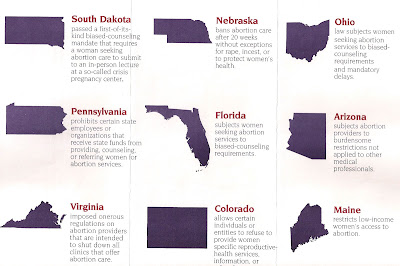 States with major impediments to abortions.

Imagine, just imagine, if getting a colonoscopy required one to only have it at a fully -equipped surgical operation center, and with all gastroenterologists required to have full  admitting privileges to a hospital.  If that were in fact the case the cost of colonoscopies would go through the proverbial roof, and fewer people would have access to them at  gastroenterology screening centers. Fortunately, this is not the case so that if the gastroenterologist accidentally perforates your colon (which happens in about 1 of 200 cases) then you still must be rushed to the nearest ER for repair surgery. The existing centers do not have the wherewithal to do it.

Well, in Whole Woman's Health vs. Hellstedt Texas tried to impose similar burdens on abortion clinics which already had been whittled from 41 down to 19, and only 9 or so would have been left. This would have made getting abortion services extremely problematical for most women in the state given its vast expanses.

The Texas law, passed in 2013, would have required abortion clinics to act more like hospital surgical centers, so they would have had to spend hundreds of thousands of dollars - and in some cases millions - to upgrade their facilities.  It also would have required doctors at abortion clinics to have admitting privileges. The state claimed the actual aim was to protect women's health, to ensure they had the optimum facilities for their recovery and so on.

Of course, any idiot could see through this smoke screen, given it basically used the ruse of making the perfect the enemy of the "good". Thus, most abortion clinics in the state were good enough to ensure women's health was protected but Texas insisted on making them "perfect".

Thanks to Justice Anthony Kennedy this bogus law has now been shot down, as well as a raft of similar bogus laws being considered in other states. Obviously, since this has set a judicial precedent then any other wacko state that tries to implement it will also lose.

Thus, had the court upheld the law in this case, it would have not only affected Texas but other states considering similar laws restricting women's access to abortions.

Interestingly, this marks the first time Justice Kennedy found an abortion regulation he didn't like, which went too far, and as Justice Stephen Breyer put it in his opinion the Texas law "imposed an undue burden on women to obtain an abortion".

The whole episode speaks to the extreme use of subterfuge, diversion and distraction that  states are now willing to invoke in order to try to do an end run around Roe vs. Wade.. Fortunately, even if Antonin Scalia had been alive and present on the court it wouldn't have made a difference - other than one more for the opponents.

Another reason liberals have no choice but to vote Hillary this November. We can't afford the luxury of women losing any more ground in the abortion wars.
Posted by Copernicus at 8:01 AM