Cougars (top) and bears (below) are increasingly moving into more developed areas of Colorado because of the loss of habitat due to human encroachment. 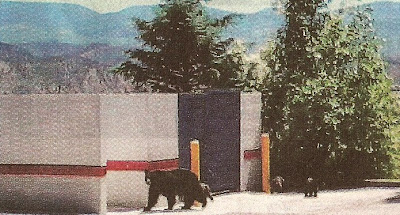 Who can forget the end of the seventh verse of John Denver's terrific hit, 'Rocky Mountain High':

Why they try to tear the mountains down to bring in a couple more...
More people, more scars upon the land....

Well, we now know those words, written (and sung) more than 30 years ago, presaged what is happening to Colorado now. This was revealed in a Denver Post article four days ago, dealing with the increased takeover of once pristine or public lands for other uses, including fracking and private development.

"The more people" aspect was revealed three days ago in a front page article tracing the genesis of Colorado's Front Range housing crunch. To put it in numerical terms: 102, 000 poured into the state last year but only 25,000 new homes were built to accommodate them,  While in urban areas like Denver this is creating a pressure, high density crunch, in others it's causing gentrification. In the latter, long time residents complain about not even being able to see the mountains any longer because "newcomers have put up new, $1.25 million homes blocking the view".  The same old timers complain that these new arrivals "in BMWs" have incepted many new restaurants, but "most are unaffordable".

According to The Post's analysis:

"Urban sprawl, commerce and drilling claim the equivalent of a football field every 2 1/2/ minutes- roughly a Los Angeles sized open area every year."

The effect is to rapidly fragment the available land which isn't a good thing for humans or wildlife.. According to David Theobald, a Colorado State University conservation biologist quoted in the article:

"If we want to have wildlife populations be able to move across the land, the most widely recommended strategy is connectivity of landscapes. If we are increasingly fragmented that does not bode well."

What he means by that is Coloradans are then much more likely to encounter wildlife in their backyards that don't belong there, including: mountain lions (which have a nasty tendency to eat any pets left out), bear - black and brown, and coyotes.  Thus, the more open space is consumed - by either sprawl, development or fracking, the less habitat available to wildlife and the more probable encounters with humans - which usually don't redound to the benefit of the critters.

Looking in more detail, the study found that "the main driver was energy development (i.e. oil and natural gas fracking) which drove 32.7 percent of the transformation in Colorado."

This energy development now includes no less than 55,000 active wells and 40,000 inactive . Next is urban sprawl which expansion has caused 22.3 percent of the change in land use in Colorado. Meanwhile, transportation activities are responsible for 4.1 percent of change.

Apart from the human factor, climate change and nature are taking  a separate toll: As reported by the Post in a follow-up piece (May 21, p  13A), "the mountain pine beetle has chewed up 3.4 million acres of Colorado forest land - according to the state forest service." The origin of the beetle in Colorado forests is tied directly to climate change- global warming and interested readers can find details here:

Moving forward, it appears at the rate more people are entering and settling in our state - not all of whom have any affinity for the preservation of its natural beauty - it may not be long before John Denver's nightmare version of his song manifests.