Am I A ' Leftist Radical'? Nope, Just A JFK- Era Liberal Who Never Changed Over 54 Years! 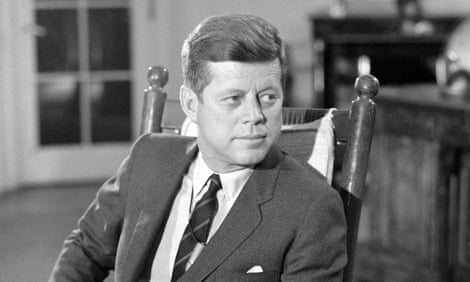 Back in in the mid-90s I was taken aback at the accusations of "commie"  hurled at me by unhinged lone nut defenders (e.g. of the 'lone nut',  Warren Commission codswallop) on the JFK usenet groups. It was particularly evident on alt.jfk.conspiracy (moderated) run by erstwhile Marquette political science prof John McAdams. The reason for their ire? My robust defense of JFK's decision to issue National Security Action Memorandum 263 to pull all U.S. personnel out of Viet Nam by calendar year 1965.

Of course, the original retort of Warrenite pawns was to insist JFK never intended any such thing. Then, I had to inform them that what has often been cited as the NSAM, i.e.


Is in fact only the cover letter by McGeorge Bundy. It has only passing relevance to the actual content of the NSAM, but it does clearly state “the President approved sections IB(1-3) of the report". Which report? To find these, the researcher must turn to Document 142 in The Pentagon Papers: ‘Report of McNamara Taylor Mission to South Vietnam'. Then the serious researcher will read:

IB(3): In accordance with the program to train progressively Vietnamese to take over military functions, the Defense Department should announce in the very near future presently prepared plans to withdraw 1,000 U.S. military personnel by the end of 1963.

When that clarification became impossible to refute, they jumped on the "commie" epithet bandwagon. This then brings us to: What happens in this country if one comes to a certain political position then retains that position while the entire political spectrum shifts around him?  This is a question I've frequently asked myself as I've beheld dozens of people around me shift their politics to suit the mood of the moment or the media's tune. It has included family, friends as well as others.

For reference, let me make it clear I am not only knowledgeable of JFK's many anti-war policies (including the Nuclear Test Ban Treaty of Aug., 1963) but also embracing them. That's because I am an old line Kennedy-style liberal who has never altered his position an iota since the early 1960s.  (Even years before I could vote). I  make no apologies for that, though the party I once belonged to has now moved center -right and corporate. In the words of a recent salon.com piece: "The majority of Democrats have shifted to the right so far that the two-party system is almost unrecognizable, according to Noam Chomsky".

The same piece quotes MIT Prof Noam Chomsky:
“There used to be a quip that the United States was a one-party state with a business party that had two factions: the Democrats and Republicans—and that used to be pretty accurate, but it’s not anymore. The U.S. is still a two-party state, but there’s only one faction, and it’s not Democrats, it’s moderate Republicans. Today’s Democrats have shifted to the right,”

This was originally related to an interview by RT America’s Anissa Naouai.
Chomsky's insights are spot on, and as I've posted before, the only reason some perceive me as a Marxist Socialist or "communist" (as opposed to FDR-JFK style liberal) today is because: 1) Their own positions have shifted radically right and 2) they're unaware how the political spectrum shift has been warped by propaganda, revisionist history. (Such as the Rightist trope that JFK was "really a cold warrior" and 'fiscal conservative' when all the evidence indicates this is balderdash, e.g.

"What Kennedy attempted to effect .....in the three years he was in office, was a moderate peacetime version of the federal policy during World War Two."What was the result? Professor Gibson once more:"During the years affected immediately by Kennedy's policies , 1962 to 1964-65, the U.S. economy returned to and even exceeded the rapid growth displayed during the pre-stagnation period" (of WWII).

But the philosophic conflation of liberals with commies  (as JFK himself was identified after signing the 1963 Nuclear Test Ban Treaty) occurred long before JFK reached office. Commie hysteria - the "Red Panic"- probably began in the late 1940s soon after the Russians got the A-bomb.

The 1950s then became a decade of runaway paranoia which most of those who didn't live then can't even begin to imagine. One marker is shown below,  in one of the "Crusade Against Communists" trading cards produced by TOPPS, e.g. 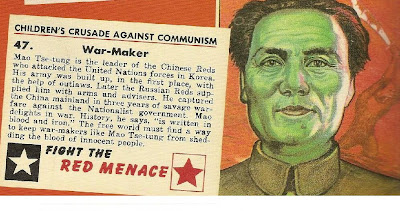 The aim was to inculcate ‘Communist Recognition’ in children 7 to 10 years old, and get them to hate this system even before they knew what it was about. The garish depictions, such as that shown of Mao Tse-Tung with ghoulish green face  - helped to reinforce the propaganda.   Hysteria grew as an admixture when millions of grade schoolers - like I was in 1952- had to duck under our desks in regular drills to "escape the fallout from Communist atomic bombs". Air raid sirens screamed as whole cities underwent "emergency drills" and CONELRAD broadcast its ominous messages and beeps.

The TV at the time didn't help either, with propaganda shlock like "I Led Three Lives" fucking up viewers' brains to a far-thee-well.

Then there were the House Un-American Activities  Committee (HUAC) sessions convened by rabid, anti-commie ideologue, Sen. Joseph McCarthy - who makes Ted Cruz look like a wienie or wimp. McCarthy's insane crusade ended up tarring thousands of innocent Americans with the "commie" brush, because too many lame brains were caught up in his nonsense and never approached his hearings analytically until the very end.

By the 1960s, I'd had it with the American propaganda and began sending for 'Soviet Life' magazine from the Russian Embassy in D.C. Sure it was propaganda - I knew that - but I wanted to see what the other side had to say. After receiving about seven issues, however, I grew bored reading of all the "agrarian reforms".

By the end of Reagan's 2nd term, commie myths and hatreds were well entrenched and Ronnie the pop-eyed fool (who once asked a Naval commander if cruise missiles could be "recalled")  could get away with calling the USSR the "Evil Empire". Never mind this "evil empire" saved the West's living ass as it turned back Hitler's troops in World War II, at the cost of losing 20 million of their own people. Think about that! How do you think America would have handled a vicious aggressor actually invading the nation and laying waste to major cities as the Hitlerites did to Russia? And losing 20 million?  (For some insight, google: "Battle of Stalingrad")


What about Trump who seems neither left nor right? One commenter's take on smirkingchimp.com encapsulates him:

"Trump is a giant sized real estate salesboy, nothing more. he is used car sales trash grown fat. Trump is a reflection of a society turned away from productive activity, belittling honest labor and skills as nerd stuff, glorifying sales trash and marketeer "sell the sizzle" non values. It is a reflection of a world that promotes "selling the brand" over the product. It is a reflection where the ONLY purpose of a business is to make money with no ethics, no expectation to produce anything, no obligation to the employees, no obligation to the community. It is a broken society. trump is not a healthy human being."

What  'Blood Red Sun' is writing here I pretty well agree with. Trump is more a carny barker or "sales pitch man" than actual politician - of the Left or the Right. Those party demarcations mean nothing to him so he can easily flip flop - whether on abortion rights, Social Security, military expenditure, taxes or whatever he wants.

Back to the Democrats. Their mutation toward corporate elitism began when they embraced Neoliberalism via the Democratic Leadership Council  (DLC) in the Reagan era, and 'Fix the Debt' by 2010.  The Party effectively became Republican lite – though they've always tried to make us believe they’re the 2nd coming of true Dem liberal populists.


Bah!  If you want to behold true Democratic populists look at the Bernie Sanders' campaign. Then look how shabbily it's been treated by the Dem establishment, aka Neoliberals.

Some perspective on this is provided by Robert McChesney in his excellent book, The Problem of the Media, Monthly Review Press, 2004, p. 49:


"With the election of Ronald Reagan, the neoliberal movement had commenced. Neoliberal ideology became hegemonic not only among Republicans but also in the Democratic Party of Bill Clinton, Al Gore, and Joseph Liebermann. Differences remained on timing and specifics, but on core issues both parties agreed that business was the rightful ruler over society.

It was a return to the 1920s - if not the Gilded Age of the late nineteenth century. Few industries seized the neoliberal high ground as firmly as the media and communications industries.

A new generation of economists trumpeted the value of applying market principles to all communication policy matters, as one of them put it, 'the ancien regime was often dominated by ad hoc prescriptions premised on shaky economics applied to dubious histories'.

Behind the mighty rhetoric, the stakes were clear. These corporations knew if they were granted First Amendment protection, their existence and operations "would be placed beyond the reach of majorities"


McChesney goes on to note (p. 51) that this is pretty well what DLC'er Clinton accomplished with his 1996 Telecommunications Act.  Which as we may recall, also set the stage for Bernie Ebbers' WorldCom scandal, as well as the Adelphia travesty.

"The corruption in media policy making culminated in the passage of the 1996 Telecommunications Act, arguably one of the most important pieces of U.S. legislation. The law rewrote the regulatory regime for radio, television, cable television, and satellite communication - indeed, all of electronic communication including the internet.


The operating premise of the law was that the new communications technologies - combined with increased appreciation for the genius of the market- rendered the traditional regulatory market moot.

The solution therefore was to lift regulations and ownership restrictions from commercial media and communication companies, and allow competition in the marketplace to develop, and reduce the government's role to that of protecting private property.

There was virtually no dissent whatsoever to this legislation from either party, the law sailed through both houses of congress, and was signed by a jubilant President Clinton in February, 1996. Corporate CEOs regarded it as their "Magna Carta".


It was around this time I ceased membership in the Democratic Party and became an Independent instead. This meant I had the total freedom not to be bound by a party -  or its platforms -  that no longer embodied my old line JFK-FDR principles. Was I wrong? No!

The Democrats had indeed forgotten the foremost words of JFK himself:

For the Democratic Party is not a collection of diverse interests brought together only to win elections. We are united instead by a common history and heritage--by a respect for the deeds of the past and a recognition of the needs of the future.

Personally, I predict a schism in the D-party as it  drifts ever more rightward. On one side you will have the wine and brie eating elite Dems who man the investment banks, are CEOs of corporations and make up most of the "super delegates" that ensured Bernie's loss. On the other side will be the 10 million plus who voted Sanders in the primaries and are dedicated to  defending and speaking for its traditional constituencies - as well as the millions of new immigrants entering the country.

The choice of the current  Dems is this: do you continue your DLC ways - which have now cost three consecutive congressional elections (including the Dem loss of the Senate in '14) or do you change your ways?

Do you continue to whore for corporate America in the perverse belief that "business is the rightful ruler of the society" or do you return to the defense of the interests of the ordinary Joe and Jane?
The answers to these questions will ultimately determine the quality of life for the citizens of this country.
Posted by Copernicus at 6:31 AM