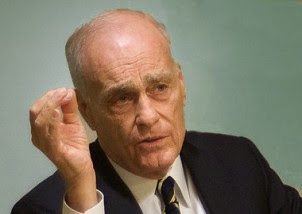 Vince Bugliosi died yesterday at the age of 80. Bugliosi had quite a history as an LA County  prosecutor (in the Charles Manson trial)  but will most likely be remembered by many of us as the author of the most massive tome ever written on the Kennedy assassination, Reclaiming History: The Assassination of President John F. Kennedy .  Alas,  the book's  heft (by 3,5 lbs. weight, a total of 2,646 fulsome pages with CD Endnotes) was too much for  too many and literally defined "excess" though it was passionately written - perhaps too much so with multiple swipes at the conspiracy side.  Some of his hostile, anti-conspiracy chestnuts included:

p. 1275: "But conspiracy theorists are not rational and sensible when it comes to the Kennedy assassination."

Vince, bless his antagonistic little soul, might have fared better had he pondered these words of Matt Ridley ('Maybe We're All Conspiracy Theorists', in  The Wall Street Journal, Sept. 10-11, 2011):

Sadly, Bugliosi’s penchant for ad hominem didn’t end with the critical conspiracy community – authors but extended to key witnesses and others (e.g. Secret Service agent Abraham Bolden) trying to fight for the truth. For example, Bugliosi refers to the courageous African- American woman Aquilla Clemmons (who pointedly noted that a heavyset man shot Officer J.D. Tippitt, not Oswald) as a “kook”.

Sadder still, were the gazillions of errors, omissions, and misrepresentations. I do not intend to beat up on a dead man but readers who want the details can go to these links:

I prefer to remember Bugliosi not for his wayward lurch into the Kennedy assassination, but for his more on- target earlier works  - that really ought to better define him. In that context perhaps his best work was embodied in his 2001 book, 'The Betrayal of America: How the Supreme Court Undermined the Constitution and Chose Our President'. This refers to the noisome interjection of the Court in the 2000 Florida recounts, basically handing the 2000 election to Gee Dumbya Bush.

As opposed to his meandering, bloated book on the Kennedy assassination, this one is concise, argued rationally and precise in its target:  the five conservo justices who felt it their bounden duty to interfere in a presidential election. In essence, gutting the provisions of the Constitution, by rendering tens of millions of voters redundant.

The book - as opposed to 'Reclaiming History' - is an essential addition to every real citizen's book shelf, along with Greg Palast's 'The Best Democracy Money Can Buy'  While Bugliosi attends to the Supreme Court travesty, Palast devotes his focus (in Chapter One) to what came before to make the election close in FL: the removal of  tens of thousands of African- Americans from Florida voter rolls - by reclassifying them as felons. This was masterminded by Jeb Bush (in cahoots with his Secretary, Katherine Harris), with Bush the same piece of crap who now wants to be President.

As an atheist I must also commend Bugliosi for his well -thought out 2011 book, Divinity of Doubt. Again, as compared with his Kennedy book, this one is tightly argued, no errors of fact that I could spot and most notably, he left the ad hominem out.

In a memorable, April 22, 2011 appearance on MSNBC's  'Morning Joe', Bugliosi gave a robust defense of his book and also delivered cogent replies to critical questions by Joe Scarborough. He began by dismissing the god-hood claim, showing that Jesus was not born of a virgin and that the claims for prophetic fulfillment in the New Testament hearken back to Isaiah 7:14. The Hebrew word used therein is not that for virgin (petula) but the one for “young woman” (almah). Hence, Bugiliosi argued there was a clear indication of no divine origin (which he ties to the gospel authors’ claim of being born of a virgin).

Not missing a beat, Bugliosi then launched into citations from Matthew showing that Yeshua’s own family (e.g. Mary) perceived him as quite “off the beam” or perhaps unhinged mentally, as he goes off preaching. When she questions him about launching off into these Temple preachments he in turn reprimands her to the effect, “Woman, know ye not that I must be about my father’s business?” Which confirmed in her mind that maybe he needs more help than she can provide.

Bugliosi then dispatched the resurrection as an actual historical event, citing references from Matthew in which a number of other people are also claimed to have been resurrected. According to Bugliosi, “Then that means that if others did it too then it has very little real significance. It’s no longer special. What I take away from that is that it’s purely mythological. We can say it is more symbolic than real”.

Interestingly, When Scarborough asked if he was an atheist, he quickly responded, “Absolutely not! I'm an agnostic".

But, of course, as I've noted before,  an agnostic atheist is exactly someone who withholds belief until there is evidence for a claim. A pure agnostic is one who asserts there is an impossibility of ever knowing enough to confer belief.  Clearly, Bugliosi fell in the former category - especially after Peggy Hewinson asked him whether he fretted on going to heaven, accepting what he does and writing such a book, Bugliosi responded tongue in cheek: ”Yes, I’d like to go on to heaven, but I want to take my reason with me!”

The interesting aspect of this take (in conjunction with his dismissal of Christ’s godhood) is that Bugliosi is really an agnostic atheist, as opposed to being a pure agnostic as he claimed. If he was a pure agnostic he’d also agree that the issue of Christ’s godhood - like God's existence- can’t be settled because we don’t have sufficient knowledge to do so. But that was not his approach: as he adamantly claimed to have refuted (“beyond any reasonable doubt”) both the resurrection and Christ’s divinity.

In any case, Vince will now be able to see how many of his earlier claims are true, and indeed, whether there is a "heaven". If there is, which I doubt, I believe he will also meet and greet Lee Oswald there - who will finally get to tell the old prosecutor how wrong he was about there being no conspiracy at work in the Kennedy. assassination- which framed Lee as the bad guy. Hopefully, Vince will finally pay close attention, which he wasn't able to do at the end of his physical life!
Posted by Copernicus at 8:01 AM