Seniors "Running Up" Medicare and Social Security Tabs? In Fact, Too Many Risk Going Bankrupt 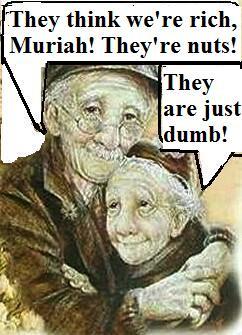 "Maybe Elizabeth Warren - a Boomer- will finally raise taxes on her generation which is running up the tab on Medicare and Social Security" -  Joseph Sternberg, WSJ, Sept. 13, p. 15A

"Yeah, I'm turning 65 next year.  Can't wait to go broke  trying to make ends meet with Medicare coverage. I worked 40 plus years paying into a system that will - at some point - kill me.  Yes, I can afford supplemental insurance at this point, but sometime in the future I may not be able to because of deteriorating health as I age."- Denver Post letter writer, Nov. 2, 'The Needs Of Our Seniors', p. 3K

It may stun many people to know that Medicare is by no means a "freebie" or entitlement. First, people have paid into it over a life time at the rate of 1.45%  in FICA taxes per paycheck. This is what appears on your W-2 tax form as "Medicare wages". It is that amount deducted from your pay for Medicare. Thus, it is most certainly not "welfare" and I'd even argue that it cannot be called an "entitlement".

Second, no genuine "entitlement" would require a beneficiary to cover extra expenses like eye glasses and dental - two aspects that cannot be ignored and can come to thousands of dollars a year.  In addition, no entitlement makes increasing claims on one's budget  - as the Denver Post letter writer complained about - in regard to having to buy supplemental insurance.


The Social Security cost-of-living increase is a cruel fraud ...


It is clear then, as the LA Times report notes, that current cost of living increases to Social Security are simply "cruel frauds" - i.e. if they can be wiped out with a simple offset.  "Here you go, sir, your Social Security increase for the new year....But...your Medicare supplemental (Part B) is being increased too - just  that amount -  so will be deducted from your COLA to pay for it!"

Lastly, one needs to enroll in a Medicare Prescription Drug Plan (Part D),  critical since you only get one shot getting lower cost access to prescription drugs. Even if you're not currently on any drugs per se, counselors assure you that the best bet is to at least sign into one, in case you have to rely on a prescription (say for blood pressure) later.  Right now I am on a blood pressure med (amlodipine besylate) and a statin (prevastatin) both of which I need to control a tendency to malignant high blood pressure, plus control the condition of hyperlipidemia - the tendency to collect too much fat in blood and liver.

Fortunately, I can get both as generics so keep the total drug costs down to about $15 a month.  But at the same time, the plan provider (Humana) has now announced  the third monthly annual premium increase in a row - from what used to be ($18 / month), to now $60 a month.  Hence, the monthly premium is now four times what I pay for the actual meds. For Janice the factor is a bit smaller as she takes more meds, but the monthly increase is no less painful. So for prescription drugs alone we are talking about another $1,440 a year.

Added to the cost of supplemental insurance - and leaving out the Medicare supplemental because it's offset by deduction from the Social Security COLA - that comes to: $7, 716 total.   But this doesn't include any dental or glasses etc. which easily adds another $2, 500 a year for both of us. That makes a grand total of $7,716 +  $2,500 =  $10, 216 a year in premiums and procedures etc. not covered by Medicare.  I show all this to also indicate what costs would be like for anyone who "buys into" Medicare.

Clearly, such proposals on offer from one or more Dem candidates need to be put into realistic perspective that people aren't just going to buy into the program and get a freebie. Not any more than those of us already in the Medicare program.  It can't be otherwise.  As for the 'Medicare for all' pipedream which claims all premiums can be wiped out for millions,  I will believe that when I see it.

Adding up all these  Medicare -related costs up it is clear Joseph Sternberg (top quote) is talking twaddle when he claims seniors are "running up the tab".  In fact, the tab is being run up on us (including via the Medicare Advantage program which is bleeding traditional Medicare into insolvency.  All one need do is run the numbers to see, in fact,  that Medicare as we now know it fails to work for many retirees, leaving them in danger of going bankrupt.   The corporo-media tends to give that short shrift.

Point of fact: . A study published this year by Gallup and West Health, a research organization dedicated to lowering health care costs, showed that people over 65 had withdrawn an estimated $22 billion from long-term savings accounts in the previous year to pay for health expenses Medicare didn’t cover.  This is why T. Rowe Price and other investment centers emphasize a retiree today needs at least $250k saved just to cover medical expenses.

Few may recall that Medicare Advantage is the privatized spawn of the  "Medicare Modernization Act" that Billy Tauzin and his Reepo criminal congress forced through back in 2003 - to the cheers of Big PhRMA.  It was no wonder that soon after it passed, Goldman Sachs estimated the benefit to PhRMA ( in terms of corporate welfare), would be over $13.7 b over ten years. It's probably even more now.

Indeed, another vile aspect of the 2003 law was that it barred Medicare from negotiating for lower drug prices like the VA does. The law actually left the negotiating to private insurance companies and pharmacy benefit managers. The very existence of this refuse denied Medicare the ability to drive down prices - and indeed control prices.

But then many of us at the time suspected the Bushies were behind this recklessly expensive, bogus law as a means to rush Medicare toward insolvency - the better to privatize it. They even embedded a Trojan horse in the law called "Medicare Advantage" which is now spending $12b a year more than traditional Medicare.

Moreover, our money is daily being pilfered, "borrowed" from the Social Security Trust Fund to pay for military -defense spending, as well as other national budgetary incidentals.  The total now owed is estimated at $3.4 trillion.  So it is outrageous that Sternberg could even suggest higher taxes on Social Security beneficiaries.    But this is the skewed political landscape we inhabit now.

It's no surprise Sternberg would try to make a specious case to tax Medicare and Social Security given the 207 GOP tax cuts have sent deficits soaring.  So the Reep defenders want some way of replenishing the revenue lost by the reckless tax cuts. But no one with even  a normal intelligence is biting.