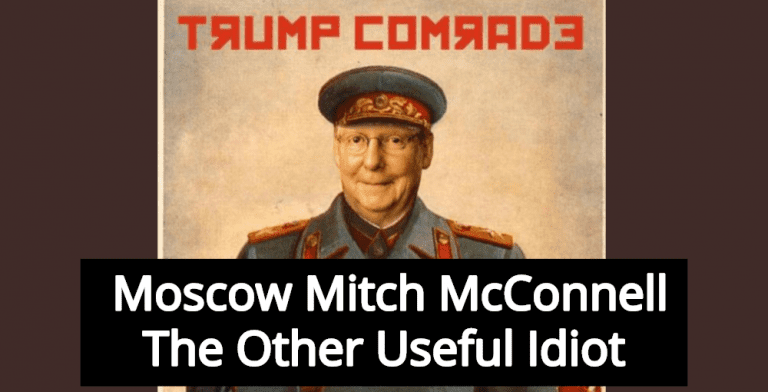 "I mean, what  the Senate majority leader McConnell  said was nonsense, and he didn't discuss any of the facts. It was a pretty hard act to follow, because for someone who wasn't in the weeds it may have sounded reasonable.  But I think Chuck Schumer was up to the occasion, and simply asked 'what are they afraid of?' - Prof. Lawrence Tribe last night, on Last Word, MSNBC

"I heard some of what Mitch McConnell said today, and it reminded me of our founders who wrote the Constitution.  They suspected there that there could be a rogue president.  I don't think they suspected we could have a rogue Senate leader too."  - Nancy Pelosi yesterday, in response to Mitch McConnell

"The president of the United States attempted to use his political power to coerce a foreign leader to harass and discredit one of the president’s political opponents. That is not only a violation of the Constitution; more importantly, it is profoundly immoral.”  -   Mark Galli, the editor in chief. of  Christianity Today

Let's get to the point:   Irrespective of the corporate media's hopelessness in covering Trump and his antics (Last night I heard Chris Cuomo spout - during a break in the CNN Dem debate - that Trump was "killing them" with his tweets that "they're afraid of a Senate trial ),  everyone else with a grain of sense knows Nancy Pelosi has simply outmaneuvered Moscow Mitch.  This is the Russian Puppet we have as Senate leader, who already declared - for the benefit of Vlad Putin and his overseer Trump - that he will not be nonpartisan in any upcoming Senate trial. Nope, this slime ball with a face like an inebriated guppy just plans to hold his own mock trial ("Potemkin trial" in the words of Lawrence Tribe)  absent any witnesses (like John Bolton or Mick Mulvaney) to just 'phone it in' for Vlad and Dotard.

Moscow Mitch  has openly confessed that he is co-ordinating every step with the White House – which means by extension he's doing the same with Moscow and Putin. Indeed, at his annual press conference on Thursday, following Mitch's lead, Putin poured scorn on the articles of impeachment – the equivalent of congressional charges or indictments – saying they were based on “made-up reasons” and offering the opinion that Trump would almost certainly be acquitted at trial in the Senate.  Mitch  and most of his GOOP Goobers would be proud to agree, and he has in the manner in which he's so brazenly spurned a real Senate trial - as opposed to say, an old Soviet-style show trial.

So now we know the head of the jury is in cahoots with the defendant – and has rebuffed Democratic demands that key witnesses-  including the former national security adviser John Bolton -  be called to testify.  The very admission, let us note, is a violation of an oath he is to take prior to the Senate trial, i.e. to be unbiased and nonpartisan.   It is also why Harvard law professor Lawrence Tribe wrote his compelling op-ed Monday in the Washington Post, 'Don't Let Mitch McConnell Conduct a Potemkin Impeachment Trial'.  ("Potemkin" is derived from "Potemkin Village" -  where a  "Potemkin village" signifies any deceptive or false construct, conjured often by cruel regimes to deceive both those within the enclave and those peering in from outside.)

So though ignorant pundits and yappers like Chris Cuomo have hissy fits, it was actually a Harvard Law professor who is one of the architects of the sensible plan to refuse to transmit the charges to the Senate.  This is at least until McConnell and his Russkie apparatchiks get serious about a Senate trial.

But Nancy  Pelosi - in line with Prof. Tribe's suggestion - called Moscow Mitch's shameless bluff.  .Using a move right out of LBJ's "break their knees" playbook, she is withholding sending the Articles of impeachment over to the Senate. Not out of any "fear" as the clueless media Babbits (like Chris Cuomo) or twits like Trump claim, but because she is not going to prematurely  deliver  House impeachment articles simply to be used as Moscow Mitch's playthings.  To serve the Russians' interests, or Traitor Trump's. (Who in a parallel universe would have been hung by now.)

How do we know the move is superbly strategic? Because it has the semi-human dumpster fire in the White House going batshit frantic as he belches demands for an "immediate Senate trial".  Why? Because he yearns for a mythical "exoneration"  and "vindication"  and knows Moscow Mitch and his other useful idiots- like Lindsey Graham- will merely hold a kangaroo court to acquit the bastard. Then he can use such treasonous acquittal to falsely claim vindication. And exoneration.  But like the case of O.J. Simpson, we know that will not hold up.

Moscow Mitch, like the Soviet propagandists of old, bellowed out his own bollocks, i.e.

“House Democrats may be too afraid to even transmit their shoddy work product to the Senate.  Looks like the prosecutors are getting cold feet in front of the entire country, and second guessing whether they want to do the trial.”

Of course, this is cow manure- level codswallop. The House Dems actually produced an impeachment inquiry for the ages, calling dozens of high profile witnesses to testify including Fiona Hill, Gordon Sondland, Kurt Volker, David Holmes, Marie Yovonavitch, William Taylor, and many others.  All of them produced devastating direct testimony of Trump's criminal acts, to do with shaking down Volodymyr Zelenskiy to announce an investigation of the Bidens - in return for nearly $400 m of military aid to Ukraine. (Now threatened by the Russians in the Domass region).

Ask yourself then why Moscow Mitch is called that by so many, when a bit of logical process reveals that if he protects Trump - and the Senate trial is a sham - Trump (and pal Vlad) may be emboldened to strike again.  Very likely in next year's election. So Mitch is serving two masters - Putin and Trump - along with his retinue of GOP comrades....errr....collaborators.  Hence, we must call a spade a spade: he's Moscow Mitch and Trump's bitch.  He must be the latter too if he is turning over his power to properly oversee a Senate trial to Trump


But wait!  We must also conclude that Moscow Mitch is a first class moron, if he really believes the Articles approved are the "thinnest and weakest" in American history, This in opposition to over 500 constitutional scholars who have attested (in a letter) to the precision and high quality. In the words of Harvard constitutional professor Noah Feldman, for example:

"All you need to know to realize Trump actually committed these crimes, is the memorandum of the phone call he had with Volodymor Zelenskiy - which makes it super clear he abused the office of the presidency to gain a personal advantage in the 2020 election.  And the letter where the president directed his White House Counsel to say 'I'm stonewalling the whole impeachment inquiry.'  Which shows Trump is impeding or obstructing congress..

If you've got those things that's all the proving you need. It makes these very simple, clear and explicit articles of impeachment."

But look, this guppy drool, i.e.  that the case is "the thinnest and weakest" and is "shoddy work" - proves Mitch lacks the IQ to  discern quality when it's evident.  Indeed, Prof. Lawrence Tribe - who I'd argue knows a tad more than Mitch - argued the two articles were among the strongest he's seen, and certainly stronger than the ones the Reeps hung on Bill Clinton, for lying about a sexual affair.  (This was last night on Last Word with Lawrence O'Donnell)  Thus, we must conclude Mitch  is also a useful idiot, or better, Vladimir Putin's useful idiot  but ensconced in the U.S. Senate.


Trump’s line of attack, judging from an early morning tweet, was to underline and reinforce the overwhelming partisan divide. He seized on the fact that no Republican had broken ranks in the dual impeachment vote. "100% Republican Vote,” Trump tweeted. “That’s what people are talking about. The Republicans are united like never before!"
Well, united in gross stupidity, treachery and intransigent rejection of facts and reality. One huge reason why the impeachment could not be other than one-sided - or "partisan" (as Ivanka whined on CBS this morning) because the other supposedly serious party prefers to wallow in fantasies, denial and psychotic, debunked conspiracy ideations.
What Trump praises  is more an indictment of the whole Reep party which has basically mutated into Trump's cult. Much like Jim Jones' cult in Guyana - in the 1970s- had tricked so many followers to worship him as a kind of demigod, ultimately leading to their mass suicide in a "white night" in November, 1978, e.g. 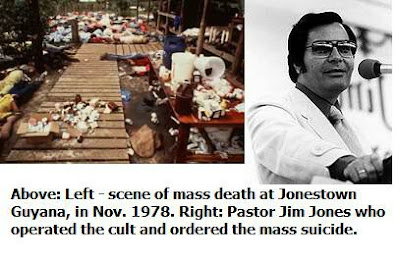 To quote author Jon Meacham - in his own observations following the impeachment votes and the dust settling:
"What we've just spent hours absorbing is the existential question of our time: Is the law more important or is partisanship?  The Democratic party did the right thing in this case. The Republican party decided their partisan passion was more important than their brains, and their hearts. Appetites is what won the day for them."
And the take from commentator Chris Matthews the same night was no less damning:
"Here's a president being accused of horrible things, of selling out his office and the public trust for personal gain.  And yet all day long, with all the Republicans speaking-    able to say whatever they wanted all day long - not one stood in that well and defended this president's character. Not one said he's an honest man. Not one person said he's a good man. Not one person said he couldn't have done something like this. That is powerful stuff. That a party felt they could play all the games today- talk about tactics ad style - but they never defended the man, the person in the White House, his character.  This is extraordinary."
So what Trump praises as a virtue, is in fact a monstrous defect: the spectacle of one whole American political party losing its moral compass to become the appendage of the most brazen criminal president in American history.  Or to put it in more colorful terms, Trump has led this party to mutate into a 'Jim Jones' style political cult.  Nancy Pelosi. meanwhile - as Nicole Wallace put it yesterday, now controls the "whip hand" to drive the process forward, whether Moscow Mitch knows it or not.

Lastly, it's clear to me we have to start calling CBS "Trump TV Two"  - after several occasions having dedicated Trumpsters on to spew garbage and lies - including Reince Priebus, Trump press secretary Stephanie Grisham yesterday morning, and Ivanka today.   With twaddle like that being disseminated compliments of CBS' useful media idiots, it's little wonder almost half the country has little clue what's going on and many believe the Dems are simply "out to get" poor Trump.

On the positive side,  we saw a blistering editorial on Thursday evening, from a prominent evangelical magazine, Christianity Today, which called for Trump to be removed from office. The move was long overdue and a welcome departure from the vast majority of Trump’s white evangelical base-  which has ceaselessly glorified him- almost as the 2nd coming of Yeshua..
See also:


How Deep Will Moscow Mitch Sink in Trump's Ukraine Cover-up?


No, McConnell, Biased Jurors and No Witnesses Do NOT Make for a Fair Trial

"The impeachment trial of a president brings together all three branches of the federal government for this solemn process. So solemn that there is a special oath for members of the Senate who (I swear to God) will swear to God that they “will do impartial justice according to the Constitution and laws.”

Mitch McConnell has already told us that he will violate the oath. Actually, violating the oath is itself grounds for impeaching a U.S. Senator. That probably won’t happen. But then, things have gotten extremely weird of late."

After Impeachment and Acquittal, Expect a Vicious Republican Counterattack
Posted by Copernicus at 7:59 AM