Question:  Can you clarify the meaning of 'local thermodynamic equilibrium' in relation to black body radiation for a star?  (P.S.  I am a math whiz!) - Margith, Salt Lake, UT

Answer:  It will be of use here to refer to the diagram below, which depicts the transfer of radiation for a star treated as having a "plane parallel" atmosphere, i.e. the stellar layers are essentially parallel; 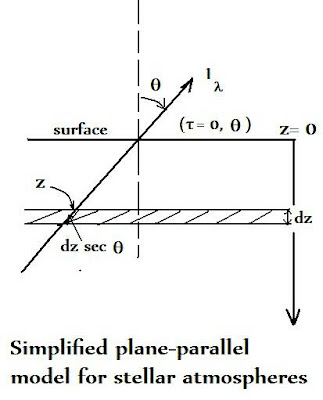 Of importance here is The Planck function describes the distribution of radiation for a black body, and can be expressed:

For a black body,   I(l) equals the Planck function:
gray atmosphere approximation. In a particular instance, let the surface flux:

This states that the flux coming out  of the  stellar surface is equal to the source function at the optical depth t = 2/3. This is the very important ‘Eddington-Barbier’ relation that facilitates an understanding of how stellar spectra are formed.

Once one then assumes LTE, one can further assume k(l) is independent of l (gray atmosphere) so that:

Thus, the energy distribution of Fl is that of a black body corresponding to the temperature at an optical depth t = 2/3.  From this, along with some simple substitutions and integrations a wide array of problems can be done.  Among the more interesting applications - since you are a math whiz - is to find the "equivalent width",  e.g. of a spectral line:


The left side defines W in terms of the intensity from the continuous spectrum outside the spectral line where the quantity (I c – I u / I c ) is referred to as the “depth of the line”, the analogous quantity to (F c – F l / F c ) on the right side where we have radiant flux units. Technically, the integral should be taken only from one side of the line to the other but the limits can be as shown provided I c (or  F c)  is kept constant in the neighborhood of the line.