Is "God" The Answer To The Suicide Epidemic? Uh...No. 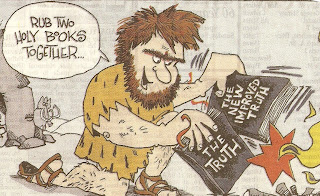 "The rate at which Americans have been taking their lives has been climbing for 20 years...prompting the search for novel suicide prevention practices. But one approach is as old as civilization itself: religious faith."-  Erika Andersen, WSJ,  July 11 op-ed.


The main problem with religious faith in this country, especially the Christian version peddled by the Right,  is the lack of temperance and the consequent prevalence of "god talk".   This leads inevitably to glib "solutions"  to a wide spectrum of societal problems, including:  drug abuse, crime and suicide - as embodied in the quotation above.  Religionists tend to forget that the mere existence of the noun (G-O-D) does not mean there is any existent behind it - or  that a putative transcendent is in any way understandable by a finite human mind.

We should note, however, that the tendency to posit a superior, supernatural being to account for physical existence is nearly universal in every human culture. Indeed, every major sacred book - whether Christian Bible, Talmud, or Koran, attributes a divine origin to the universe. The problem inheres in taking this literally, and then extrapolating to an entity G-O-D   that allegedly is involved in the cosmos.  This further supports the contention of philosopher Joseph Campbell[1] to the effect that:

‘God’ is an ambiguous word in our language because it appears to refer to something that is known.."

In other words, at the root of religious faith there is a profound lack of understanding of  the underlying epistemological (and ontological) limitations  which renders all such supernatural concepts relative and flawed.. There is simply insufficient information (and percipience)  to distinguish one person’s deity as the one true God to the exclusion of all others.

At a more subtle rhetorical level, the great diversity of deity conceptions led me early on (in studying Comparative Theology at Loyola University)  to conclude that what people really meant when they professed “belief in God”  (or investment in a generic religious faith) was a personal allegiance to a particular  subjective concept.  (Or a particular limited scripture, e.g. Torah, Koran,  that gave rise to its articulation) Invariably, the concept was flawed and limited because it was abstracted from a personal background of  limited experience, awareness and conditioning.   Similarly, the derivative religious faith is defective and limited given it is extracted from limited god concepts and scriptures.

Hence, neither belief in a deity, or adherence to a religious faith (or scripture),  can be advanced as universal  solutions to any societal issue, including suicide.  (This is apart from the fact we now know religious aspirations and beliefs arise from a specific brain region, which I will discuss subsequently.)

All of the above bears consideration when we consider an answer to the queston recently raised by Erika Andersen:  'Is God The Answer To The Suicide Epidemic?"  (WSJ, July 11)  making the core assertion that "Someone who attends religious services is significantly less likely to kill himself."

Apart from conflating church attendance with God-belief  the author makes a number of other statistical and logical errors.   In respect to the first, merely attending a church service is no indicator one has a comprehensive belief or affinity for a deity. Indeed, given all deities are predicated on god concepts we can conclude this is a form of ideational idolatry.  Also, as I noted some 30 years ago - in a response to a Harrison College colleague (who claimed state-sponsored church services opening special 'weeks'  (e.g. "Police week")  confirmed a "sacred order" - this is a non sequitur.   As I pointed out (rebuttal letter in The Nation) : "I would point out that these exhibitions are merely a conditioned social -cultural reflex, reflecting acceptance of expected social norms in a nation permeated by religious thinking".

Ms. Andersen, indeed, admits to her experience of similar responses when she's gone on lecture circuits "speaking about the ability of church plants to help fight suicide".  And being told by "naysayers"  that "it is the community aspect of the church service rather than faith which is the reason for its effectiveness".  In other words, the communal services - however often conducted - break through the peculiar  American disease of social isolation and lead to better psychological health.  My psychologist great niece Shayl also fully endorses this view: "That's pretty much a no brainer! When people have more community and social associations they are less likely to lack psychological support or kill themselves in despair".

So it has little or nothing to do with belief in a deity, which again - is merely acceptance or belief in a subjective god-concept.   This brings up a citation that Ms. Andersen makes which bears the key defects of selection bias as well as confirmation bias.   She cites a 2016 study from JAMA Psychiatry which "found that American women who attended a religious service at least once a week were five times less likely to commit suicide".

That's amazing! But let's explore it further.   It turns out that an earlier 2015 Pew Research center poll-survey found pretty much the same thing which I pointed out in an April 15, 2016 post.  Therein we learned:

- Globally, more women than men identify with a religion, pray daily and say that 'religion is very important' to them.

- Quantitatively, there are 100 million more religiously -affiliated women than men

- Men make up 55 percent of the world's religiously unaffiliated people

- In the U.S. the religious gender gap is most pronounced with 64 percent of American women expressing religious conviction by praying daily, vs 47 percent of men. (This compares to 15% of women vs. 9% of men in France),

- Most stunning of all, 68 percent of all atheists are men in the U.S.

I noted at the time "all kinds of hypotheses" to explain these findings but referenced one in particular from a salon.com article which asserted:

"Women are more devout because they have to be. Women’s religiosity is directly related to economic security. The lack of a social safety net means that women, who are still responsible for the bulk of elder and child care, often need to rely on religious organizations to support themselves and their families."
I noted that this was basically true and one reason the preponderance of female atheists hailed from higher socio-economic strata, many in the $75 k - $100k  range. Thus, they did not have to concern themselves with  projecting a "halo" say to keep their jobs or get better ones. Further, the probability was low they'd ever need to rely on religious charity.

I also put forward another powerful argument for the propensity of women to attend church services, as well as participate in religious communities more generally. I had written at the time (same post):

"In most cases, women are raised to be less aggressive than males, and to avoid being confrontational. But the very nature of most areligious people or atheists  is to be confrontational because we are challenged often on our unbelief and have to be able to respond. The very adoption of the term "atheist" is a form of verbal confrontation, and explains why many more passive folks are unable to use it - even though they are atheists in every other  respect.

I surmise women are very aware of the negative perception of atheists as well and because of this they are inclined to avoid any associations with atheism. This may also explain the large proportion of American women who are religious to the extent they actually pray daily. Author Barbara Ehrenreich.[1] has shown that American mass culture is saturated by a saccharine “cult of positivity.”  Women as the "avatars"  of social polity and decorum would be much more prone to the culture's socially positive signals and hence avoid anything perceived to undermine it. In this case culture and biology probably play a dual role in not only atheism avoidance, but active religious embrace ("See I definitely am no atheist! I pray!")

If females are more active (i.e. demonstrative) moral arbiters it stands to reason they'd also be more religious, pray, go to Novenas, attend Mass daily etc. as well as espouse  non-negotiable moral positions in line with assorted religious edicts. They'd also avoid atheism because it would be seen in the societal perspective of a moral blight or threat. It is important to note this last moral element cuts across all economic and class levels and hence one finds as many or more higher social class- income females in this group as lower."

BY the end of Ms  Andersen's piece one wonders if she is at all familiar with the work of Andrew Newberg and Eugene D’Aquili:   'Why God Won't Go Away: Brain Science and the Biology of Belief' wherein the authors trace the emergence and attachment to  God concepts directly to an area of the brain- the OAA or orientation association area.   This is critical because, frankly, unless an individual has a brain tuned to religious faith  there is little chance of inducing it and by extension attendance at any church services. To expect otherwise is to put the "cart before the horse."

The authors’ investigated  how the brain’s OAA translates an image,  for example,  into a religious reality is also described in detail[2].This is in connection with a person given an image of Christ and asked to focus on it. Within minutes, neurological measurements, i.e. from PET and SPECT scans showed electrical discharges spiraling down from the right attention area (right OAA) to the limbic system and hypothalamus “triggering the arousal section of the structure”. The authors’ test results and measurements revealed the activation of both the left and right association regions as their subjects focused on an image of Christ. As assorted cortical thresholds were crossed, a maximal stimulation (given by spikes in the SPECT scans) produced a neural “flood” that generated feedback to the attention association area.
To make a long story short, the visual attention area of the OAA was seen to begin to deprive the right orientation area (responsible for balance)  of all neural input not originating with the contemplation of Jesus. In order to compensate, and thereby preserve the neuro-spatial matrix (in which the self could still exist) the right orientation area had to default to the attention area focusing on “Jesus”.  As the authors describe the situation:

Newberg and D’Aquili observed that as the process of re-cerebralization continued, all irrelevant neural inputs were stripped away until the only reality left was Jesus. That reality (actually a pseudo-reality confected by the right attention area) thereby took over the entire mind. Or, in the words of the authors, “it was perceived by the mind as the whole depth and breadth of reality.”   This is a profound insight, and fully explained why it was essentially impossible to wean believers away from their objects of worship or devotion based on logic and reason alone.

But conversely it also explains why those of us lacking the particular  OAA  triggers, thresholds for God belief will not be swayed to "join the fold" merely out of a claim we'd have a better chance to avoid suicide.  What we have then is a "Mexican standoff" of sorts between the churched and the unchurched - mainly atheists.   Rather than condemning us or seeking to proselytize us, the religious would do better to maybe research why we don't have the brain chemicals, synapses or structures (or genes for them) and hence no incentive to pursue god belief or church services like they do.

Erika Andersen, to her credit, is correct when she writes:

But that doesn't mean "practicing a shared faith" can be a universal solution, as she suggests in her next sentence.  It may well be for a certain subset of humans but educational advantage (awareness of linguistic and comprehension limits) coupled with gender and brain differences ensures her "recipe" can only be limited like the artifacts that underpin  all religious faiths.