Why Is It So Difficult To Send A Spacecraft To Mars? 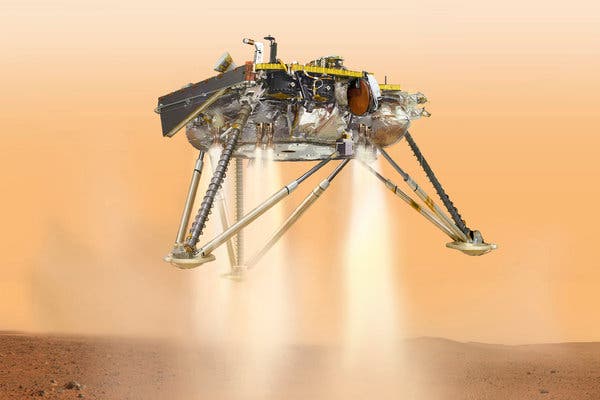 Analysis diagram for the trajectory of a spacecraft with respect to the Sun and arrival point at planet (say Mars), with arrival velocity U A , hyperbolic excess  velocity v A  and final velocity vector V A  .  The quantities with subscript 'D' refer to departure values, i.e. from Earth  (at which VD   denotes the initial velocity vector)

Simplified trajectory for spacecraft to get to Mars.  The '300 million mile' distance cited for Insight refers to the total distance of the curved path.


Contrary to what we've read in some recent media pieces (e.g. Denver Post, Sunday, p. 13 A)  Mars is not "relatively easy to get to". It remains damned difficult, and if a team hasn't got its wits about it, all i's  dotted and  t's crossed, the trip can end up in a scientific dumpster. Say like the time two teams diverged on the units for critical parameters for the Mars Climate Orbiter,  e.g.

Things went very wrong, very fast. In the case cited,  NASA lost a $125 million orbiter because a Lockheed Martin engineering team used English units of measurement while the space agency's team used the more standard (and internationally accepted)  metric system for a key spacecraft operation.  This mismatch in units wrecked the 286 -day mission though assorted space heads declared that QA ought to have caught the problem in advance. Well maybe, but maybe not.

The stat which escapes too many, however, is that only about 40 percent of Earth- launched spacecraft have successfully landed on Mars.  The problems begin with one of the most difficult problems in astrodynamics, the restricted  three body problem. That is, the launching of a relatively small space craft (say like the Mars InSight) from one planet (Earth) to a destination planet (Mars).

The interplanetary trajectory shown - under the artists' conception of the InSight landing -  conveys the basic details, but in radically simplified form.  Thus, we consider that given a specific a date of departure (T D )  from planet D (Earth) and the date of arrival (T A ) at planet A (Mars) we can compute a conic trajectory between planet D and planet A - provided we assume the two planets to be massless. (There is the great simplification!  The actual working using mass values  is obviously much more difficult!)


The ephemerides of each planet (i.e. their orbital parameters at specific times) are given as a function of date so we can obtain the position vectors ( R D   and   R A ) and the  respective velocities with respect to the Sun ( U D   and   U A  ) of the two planets at the dates.    The next step would be to compute the position vectors and the flight time, D  t , i.e. between the dates  T D  and  T A .  The applicable solution then yields the initial and final velocities, V D   and   V A in a heliocentric (Sun-centered) coordinate system.  Then the velocity vectors with respect to the departure and arrival planets can be obtained:


The subjects of each of the above equations are known as the v-infinity or 'hyperbolic excess velocity vectors'. The value v A  is critical as the craft approaches the arrival.  Alas, here is where the oft quoted "seven minutes of terror" comes in- about which the media (correctly) makes so much ado. The reason?  There is a perturbation owing to the planet's (Mars') mass which causes an instantaneous velocity change.   How is this critical? Well, given the InSight craft needed to brake from 12,500 mph to 5 mph one can understand why.

The braking alone, never mind reaching velocity  v A    near Mars,  means the heat shield must survive the entry into Mars' atmosphere, and a supersonic parachute must properly deploy to get help  the landing velocity to 5 mph.  Hundreds of things can go awry in the transit, make no mistake.  (The deceleration to landing speed is also helped by a dozen rocket thrusters and shock-absorbing landing gear.    The landing sequence is also done on automatic pilot because command signals from Earth would take too long.)

For precision work, just to get to the velocity v A   one must solve the problem using one or other perturbation methods. (One method entails using a planetary gravitational potential function with Legendre polynomials, e.g.


Given all the mathematical hurdles which had to be conquered (for which I've barely touched the surface)it's little wonder cheers erupted  at the Jet Propulsion Laboratory in Pasadena, , which operates the spacecraft.  This transpired  when InSight sent back an electronic acknowledgment of its safe arrival on Mars. As the press accounts portrayed, "that was the end of a journey of more than six months and 300 million miles."

Jim Bridenstine, the NASA administrator, was in the control room listening as each milestone of the landing process was called out, each followed by a round of clapping, expressed the view of most of the engineers on NASA TV:

“It was intense, and you could feel the emotion.”

In the months ahead, InSight will begin its study of the Martian underworld, with the aim of helping scientists understand how the planet formed, lessons that could help also shed light on Earth’s origins. It will listen for tremors — "marsquakes" — and collect data that will be pieced together in a map of the interior of the planet.  Ultimately, astronomers hope that by studying the deep interior of Mars insight will be forged into the processes that shaped the other inner planets of the solar system - including Mercury, Venus and Earth - more than 4 billion years ago.

InSight landed at Elysium Planitia, near the Martian Equator in the northern hemisphere. Mission scientists have described the region as resembling a parking lot or “Kansas without the corn.” Within minutes, the first photograph from InSight appeared on the screen, eliciting another round of cheers.

https://www.youtube.com/watch?v=05eLnSQCNVg
Posted by Copernicus at 7:18 AM