Question: I am interested in learning more about the aurora, what causes it and also what gives rise to the red and green displays.  Any insights here would be much appreciated! - Sally, Toronto

To understand the aurora, one can visualize the Earth as a giant spherical magnet, with magnetic  field lines extending from the north to south (magnetic) pole.

These  magnetic field lines have the property that any charged particles (+ protons, - electron or ions), say that are expelled from the Sun,  that approach, will spiral along them.  The Earth itself is "bathed" in the solar wind, a stream of high speed charged particles that flows into space, originating from the Sun's corona. (A hot, gaseous envelope that spews these particles out continuously – more so when there is a violent explosion known as a Solar Flare)  Around the Earth the speed of these particles can reach 400- 500 km/second.  The dumbbell -shaped region,  in which the incoming particles become trapped and ultimately - via acceleration -  generate the aurora, is known as the magnetosphere.

During high solar activity (e.g. near sunspot maximums) a higher flux of these charged particles inundates the solar wind, and the region around the Earth. The Earth's magnetic field traps these charged particles, and the highest density is around the polar regions - which we refer to as the "auroral ovals".  The Aurora Borealis, for example, which I observed and photographed north of Fairbanks, Alaska in 2005, e.g. 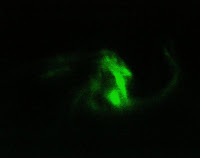 manifested as part of the huge ring known as the auroral oval, located above the Earth's Geomagnetic North pole (which is not the same as the geographical north pole).   In this region, very large electric currents are set up, as the charged particles start moving in unison about the magnetic field lines. These currents can easily reach a few million  amperes.As this discharge occurs, one or more outer electrons is stripped from the atoms, for example from oxygen in the atmosphere - then recombines again - to form new (e.g. oxygen) atoms.

With this recombination - there is accompanying emission of light, for a certain part of the visible spectrum   For example, in the case of recombination of oxygen atoms - their emitted light is in the green region of the spectrum, such as seen in my photograph above. Hence, we get the green aurora. The remarkable red aurora is produced by emission at the 630 nm (nanometer) line of oxygen and at relatively high altitudes (e.g. 200-600 km) compared to green - which tends to form below 100 km and the oxygen line at 557 nm is excited. Auroras can also display as both diffuse and discrete. In the first case the shape is ill-defined and the aurora is believed to be formed from trapped particles originally in the magnetosphere which then propagate into the lower ionosphere via wave-particle interactions.   Thus, multiple- colored auroras can be explained by emissions from different atoms in the upper atmosphere, mainly in the region of the two magnetic poles. This is also why, of course, they are more often seen in the vicinity of the N, S magnetic poles. A great analogy has been given by Prof. Syun Akasofu-  former Director of the Geophysical Institute in Fairbanks, AK - who compared the generic aurora to an image on a TV screen. In this case the (polar) upper atmosphere corresponds to the screen and the aurora to the image that would be projected on it, say for a cathode ray TV. The electron beam in the TV  corresponds the electron beam in the magnetosphere. In the conventional TV motions of the image are generated by the changing impact points of the electron beam on the screen. Similarly, with the aurora, its motions – such as moving sheets or curtains- are produced by moving impact points of the magnetospheric electron beams.

In gauging the power and intensity of auroras at different times, it is useful to remember that ultimately the aurora derives its power and potential from the Sun and specifically the charged particles of the solar wind. This is why the most spectacular displays are usually near sunspot maximum. Around those times the currents can attain magnitudes of  106  A  (amperes)or more. To give an example, during a quiet Sun interval  the residual power for the magnetospheric generator is on the order of maybe a tenth of a megawatt. If we see a new cycle coming on and solar wind activated – we may get that power up to a million megawatts for a few hours.

Two excellent books to get, to learn much more about the physical nature and dynamics of the aurora,  are:

'Exploring the Secrets of the Aurora' - by Syun Akasofu

Prof. Akasofu's text is more comprehensive  and written at an academic level, but well worth the effort if you can manage it. Freeman's book is at a more popular level, but I'd recommend it before going to Akasofu's.
Posted by Copernicus at 9:32 PM