No, It Wasn't A Blue Tsunami - But A Genuine Blue WAVE ("Pussy grabber payback") - Update 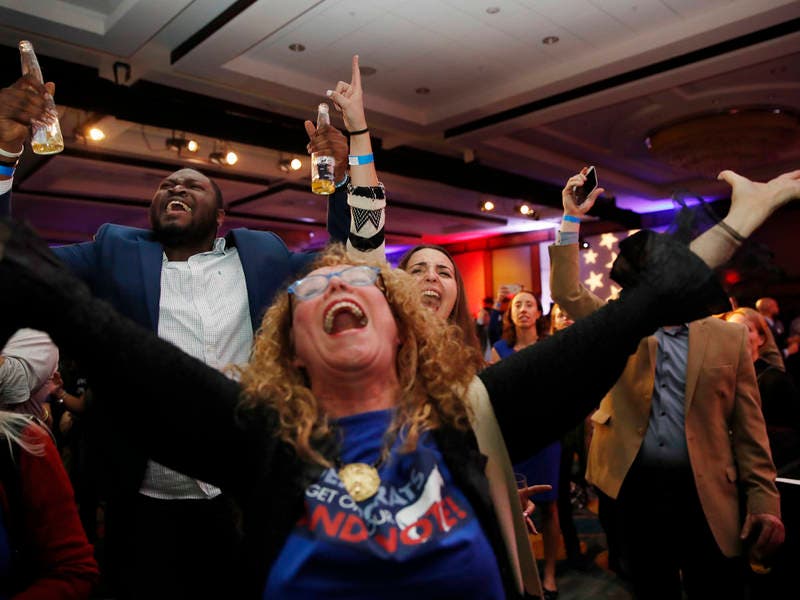 Dems celebrate with yet another big House win on Tuesday night.

The Reepster codger clique at the local BK this morning could barely contain themselves as they spat out invective at the midterm election results.  They babbled such predictable effluent as the following in one exchange.

"Yeah, just imagine, them damn Dems put a gay guy in as governor!"

"What'cha expect? It was the cemetery vote, and that's why them Demo-crats got the House too! I kept seein' all that blue on the tube, state after state."

"Heck, that's all them minorities  and migrants votin' who want free stuff. They like socialism and the Dems promised 'em lotta benefits."

Of course, that's why the Reepturds will soon be going the way of the dinos and Whigs. It's a cult party populated by  too many ossified oldsters, incapable of rational thought, and also doting Trumpster cultists who worship at the altar of the Dotard Joker:

As gratifying as it was to hear these old farts piss, whine and moan - even if the basis was moronic- things did not initially look good on the home front last night. At around 6:30 James Carville appeared on MSNBC's 'Your Vote' and began pontificating that he "didn't really see a blue wave coming". This was soon after results showed the FLA governor's race likely going to Trump toady Rick DeSantis and Bill Nelson possibly losing to Rick Scott.  At that point Janice burst into tears, and I had to do some major psychological damage control by telling her Carville's definition of a blue wave was too excessive - likely 50 or 60 net seats gained.

As another commentator (Chris Matthews) appeared, he confirmed my take that Carville defined a "blue wave' too extravagantly."  In Matthews' opinion a 30 seat win in the House qualified as a wave and I agreed. It now looks like that's exactly what transpired with the Ds at 230 seats - or 22 more than needed to take the House back. Indeed, there were major House flips - from red to blue- in hard red Texas as well as Oklahoma. As I told Janice, "That should cheer you up!"  To which she replied, "Yeah, but Beto still lost to that damned Cruz."

I turned in by 11:30 MT  but Janice stayed up hoping to see if John Tester would win in Montana, but that contest still seems too close to call. Even if Tester loses, I will tell Janice that it's more or less offset by Jacky Rosen's win in Nevada over Dean Heller.  (Update: Tester ultimately won by a very narrow margin, reported the next morning. Needless to say, it almost made J's day - until the news of the Dotard appt. of Whitaker came on and she burst into tears once more- see next post.)

But MSNBC political commentators Steve Schmidt and Nicole Wallace put it best: "This is like an earthquake because the Democrats now control the House and can mount investigations" (Even though idiot Dotard barked this a.m. if the Dems do he will "mount investigations of them".  LOL!)

Also, Schmidt made no bones about the fact it marked a repudiation of Trumpism, at least from the nation's suburbs and cities - from which most House districts derive their political support. The rural areas? They predictably went for Trump Reeps, and that led to expanding the GOP margin in the Senate.   Never mind! Taking back the House, even in spite of gerrymandering and voter suppression was huge  - and it took at least a generic blue wave to do it!

The takeaway from all this is that enough American voters  (mainly women) brought a semblance of  sanity back to the nation, realizing that a one party state doesn't redound to any citizen's benefit.  Look, the GOP while it had all branches of gov't didn't do diddly or squat to control or check Trump's excesses, they merely enabled him. This required intervention by the adults in the room and arrived when the Democrats recaptured the House of Representatives.  At last now we are done with the enabling traitor goon  Devin Nunes, e.g.

Who as head of the House Intel Committee had been in charge of a third column effort to make the special prosecutor the target of his own bastardized, specious House probe, e.g.

Now the jig is up for Trump as the Democrats sweep into Washington in January with significant new power to shape the national agenda and especially to mount  REAL investigations for the first time that could change the nature of the Trump presidency. Make no mistake as one female firned of wifey's put it, "This is pussy grabber payback, for that Access Hollywood tape!") Indeed and now women are on track to take over 100 seats in the House.

At the top of the list of  House initiatives will be efforts will be getting Trump's tax records.  After that, the House Intelligence Committee will likely  reopen its investigation of Trump to do the job that Nunes and his traitor collaborators refused to do.

As Adam Schiff  had to say concerning the then GOP mock investigation:

"By ending its oversight role in the only authorized investigation in the House, the Majority has placed the interests of protecting the President over protecting the country, and history will judge its action harshly."

Now Schiff gets to shine a spotlight on  Trump as well as GOP House chicanery in enabling him, which every red blooded American ought to cheer. Yeah, Dotard the past few weeks has displayed a bunker mentality, sensing attack from all sides – Democrats, TV talking heads, distant caravans, hidden conspirators, the media. BUT...now he is about to face an opposition with actual teeth, many of them female.

In the end, let's be clear the House vote was a much needed referendum on the disruptive and disgraceful presidency of  Trump. The Dotard himself on Monday admitted that “even though I’m not on the ballot, in a certain way I am on the ballot.” The press, he whined, considers the election “a referendum on me.”  Well, it was and he failed the test as the sane contingent of Americans restored checks and balances.  That majority comprised mainly of women voters holding their fire for two years to issue payback - and they did- with votes still being tallied.

Thw  “blue wave” didn’t reach tsunami, so never reached the Senate, but it attained massive wave level on a pace to flip almot 40 Reep House seats. . Note also this massive flip occurred despite the supposedly "great" economy: low unemployment, rising DOW etc. under the Reepo reign.  In other words, the big D- House win likely should never have occurred under a normal presidency in such economically beneficial times. As one commenter (Ezra Klein)  put it: "Republicans managed to make people angrier even despite the low unemployment of only 3.7 percent.This  is a political failure of a startling proportion."

Apart from that,  the Dems had  to overcome monumental gerrymandering,  as well as the earlier SC decision to shelve the Voting Rights oversight, and even more recently ruling against Native Americans voting in North Dakota because they lived on reservations and lacked a street address. (At the last minute, the ACLU came to the rescue in court but it wasn't enough to pull out a win for Ms. Heitkamp). Meanwhile, Reep degenerates voted for three soon -to -be jailbirds to keep their House seats: Duncan Hunter (CA),  Chris Collins (NY), and Ken Paxton(TX) - the latter for AG.

As one Dem observer in Texas put it: "If Paxton can't follow the law, how can he enforce it?"

Good question.  But see the Trumpies don't care about laws or norms.  Look at the shenanigans of Kemp in Georgia.

The shift in the House clearly constitutes a repudiation of Trump’s reckless policies, his violation of political and ethical norms and his repeated falsehoods. It is also an unmistakable rejection of the contemptible rhetoric of fear and prejudice that he has resorted to in recent weeks to rile up his base, especially his claim that a caravan of dangerous asylum-seekers from Central America was heading north to the border to “invade” the United States.


As for Colorado, the Dems took the governorship with Jared Polis besting Walker Stapleton by nearly 5 points.  They are also set to regain a “trifecta” of elected power for the first time since 2014.
As of 9:30 p.m last night, Democrats held strong margins in all five of the critical Senate races. This would give Dems the state Senate, state House and the governorship.

It was also gratifying to see Wayne Williams lose Secretary of State to Dem  challenger Jena  Griswold.  Williams is best known for punishing the Hamilton electors in Colorado, as well as other missteps. He deserved to go down in flames.

"Those are huge numbers. This is a royal blue wave in Colorado.  Colorado is going to be a blue thumb sticking out of the country a little bit.”

On the downside, the Amendment 73 to fund schools, education, failed to pass, as well as Proposition 112 which would have increased offsets to fracking wells by 2,500 ft.  It is  an unfortunate outcome, not only because the noise and odor adversely impact home owners located within 500' of wells (currently the limit) but also because of the attendant health issues. (The Colorado School of Public Health showed in 2012 that those living less than a half mile - 2, 680 feet- from a fracking site, were at greater risk for neurological and respiratory diseases as well as congenital birth defects.)

Well, maybe next time around - especially as more newcomers moving into our state feel the adverse effects to their well being, as well as on property values. Just two years ago the slavery prohibition item failed in Colorado, but passed this time around. So who knows?

Update:  Nov. 9: As the size of the Dem Blue Wave continues to  increase to mini-tsunami level, with Kyrsten Sinema now ahead of Trump troll Martha McSally in AZ, and Stacy Abrams staying faithful to voters in GA - to count every damned vote -  despite Kemp's and Trump's pressure to cease.  Let's be clear the Reeptards, Trumpies, and GOOPr stooges are playing their usual card - calling "Fraud!"  Do not be surprised, as these fuckers are incapable of winning fairly and squarely, without putting their grubby paws on the scale. If they can't cop seats via voter suppression, omitting absentee or provisional ballots, or machine tricks  they play the vote fraud card.   Hopefully, enough citizens, including in the Dem party  - raise a hue and an outcry against these anti-democratic, nee fascist forces.  It is bad enough that a minority government controls most branches (SC, Senate, Presidency), we can't allow it to tilt even worse.

Posted by Copernicus at 7:48 AM