Doing Away With Tests - And Objective Grades- Would Render U.S. Education Obsolete

I must confess that when I read in a recent WSJ piece ('Here's Why Tests Matter', Mar. 31, p. A13) that Harvey Mansfield - a Professor of Government at Harvard - had finally yielded to grade inflation, my heart sank. When I read that his capitulation manifested as a two-track system of grading, one "officially inflated" (for transcripts), and the other "reflecting what they actually deserved", I was incredulous.

It effectively meant that none of those Government  transcript grades from Harvard were worth the paper they were printed on, which was not likely more than an ounce of doggy lickspittle. So, in other words, these Harvard Government students actually did such inferior work (in context) it would have been an embarrassment to the school and the Prof to deliver the actually earned marks. Or, it could be that since every other prof at Harvard was into it, Mansfield had no choice. In any case, a pathetic indictment of the current university system based on allowing students to dictate procedures based on their evaluations of staff.

In my May 10, 2013 post ,for example, I cited a study by Stuart Rojstaczer and Christopher Healy, and published in the prestigious Teachers College Record . Their finding: About three-fourths of all grades awarded at university level are “A”s or “B”s.Of course, this makes those As and Bs next to useless precisely become of the very commonality. An 'A' used to stand for academic excellence,  meaning only a small percentage of a given class could actually earn them. But it can't be a reliable indicator of excellence if so many are getting them! It also renders the achievements of truly exceptional students ho-hum. How in the world can they truly stand out if middling or loser students get the same grades they do? It's preposterous!

In a newer study, reported at Gradefinflation.com, it was fund that 42 % of the grades at 2- and 4-year colleges were As

By contrast, what did one find in the mid -to late 1960s, say at Loyola University, or the University of South Florida?  Well, the As were at about 10 percent, with Bs at 20 percent, and 'gentleman's Cs' right at around 40 percent where they ought to be (if conforming to the standard Gaussian distribution). Similarly, at the other end of the curve Ds made up 20 percent and Fs 10 percent.  Back in those days there were no student's evaluations of teachers .

But sometime in the 80s, or maybe earlier, some genius administrator thought it would be a cool idea to have students evaluate college profs, like consumers doing a corporate survey rating their oatmeal. Just hand out a little one -page eval form to little Missy or Sonny and let them have at it - pretend "consumers"  aping a consumer survey task. What's not considered is that they lack the maturity to do a proper objective assessment, so it ends up being a  formalized emotional outburst at the prof for not delivering what the entitled little  twerps believe they deserve.
So, for the few curmudgeons who continued to demand standards as opposed to giving out A and B freebies, it was game over. For those profs who insisted that their students EARN their As instead of expecting them for just showing up, well, it was 'hasta la vista'. The college administration had to inform the uncooperative fool that this was the end of the line.

The authors  of the WSJ article indicate things have gotten even more out of hand now, adding:

Can't anyone spot what this trend means? That before the turn of the century everyone will then be getting As!

But evidently now the grade inflation cancer, which also underlies a hostility to any objective testing at all, is infecting high schools. As the authors note (ibid.) "classroom grades have become meaningless",  then citing a public school district in northern California that decided to score grades on an equal interval scale, meaning every letter grade was assigned a 20 point range. Thus, whereas an 'A' in high school used to be 93% -100 %, it now meant 80% - 100%. A 'B' used to mean 86% to 93%, and it now meant 60% up to 80%.   When did the student get an F, if ever? That entered in the final interval range: 0 - 20 %.

In my 1st year Calculus Physics  (Mechanics) class,  I  wanted to know whether the incoming HS students were prepared, and to discourage any  would -be 'evaluators' from exploiting the system to get cheap As.  Thus, they were greeted by two blackboard  diagrams and  two questions, an "intro quiz", e.g. 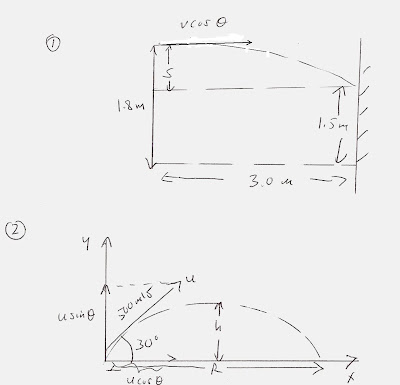 -------------------------
Quiz content changed from year to year. There were usually two problems,  10 marks per problem, 20 total, and 20 minutes to complete. A passing grade of 15/20  was required to continue in the course, otherwise remedial level math and physics courses lay in the wannabe physics student's future. (I conducted the remedial classes usually on weekends. If you didn't wish to partake you could drop out, no harm, no foul)

The point was to get rid of all those who weren't genuinely serious students but signed up to try to get credits they might need  but by wielding the evaluation form as a kind of blackmail: "Sky high my unearned grade, or else!" It worked like a charm every time I used it. The ones who aced the  quiz simply didn't need to resort to the evaluation form or grade grub in any manner, shape or form. They were sufficiently competent in physics to get the grades they actually deserved, always at least Bs.

Sadly, that was more than twenty -two years ago. Now the impetus among faculty - even Ivy League- is to write off grades entirely, to declare "they no longer matter."  According to the authors of the WSJ piece (ibid.) "the director of the Yale Journalism Initiative wrote an op -ed a few weeks ago entitled 'There's Nothing Wrong With  Grade Inflation'."  Seriously?

Meanwhile, a recent headline in  The Chronicle of Higher Education was "Why Do Colleges Still Use  Grades?"

Well, because they separate the real achievers from the pretenders and also-rans. According to the gurus interviewed at the Chronicle (ibid.): "No one really likes grading, it just annoys students!"

Tough! Then take up basket weaving, snake charming, speed texting or some other useless pastime. But don't attend university and expect to get by on your looks, charm or BS.   Regrettably, from the signs that abound, it appears that may be too late and the education establishment has finally succeeded in marginalizing the last bastion of  serious education in the US of A.
Posted by Copernicus at 7:26 AM