Paris Climate Summit Reaches Accord- But It's Too Little, Too Late 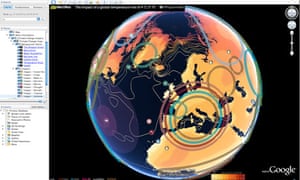 Google maps projection of 4C greenhouse world - which our vaunted leaders don't want us to know is the actual likely outcome owing to their limp climate agreement.

The Paris Climate summit is finally at an end and its accord marks a notable achievement ....for PR.  Indeed, reading over the summary in   The Financial Times, I began to wonder if public relations specialists were sitting along side national leaders, helping to write the drafts.  As the lead article in the Weekend FT put it:

"It includes an objective to limit global warming to well below 2 C and pursue effort to limit the increase to 1.5 C"

All this to be done by 2100. The problem, in blunt terms, is that it is simply too little and too late. All the steps now being proposed (and which remain unenforceable) ought to have been done in the 1990s after the Rio Climate Summit. Instead the nations of the world have been sitting around - listening to the BS of the climate deniers and their hacks - as the world burns. Indeed, more recent findings disclose a 4 C increase by 2100. And this has been known for at least 5 years!

According to a Reuters report from July, 2010:

"the Met Office Hadley Centre and other climate research centres  imposed (a projection of 4C temperature increase) on to a Google Earth layer. It's a timely arrival, with warnings this month that current international carbon pledges will lead to a rise of nearly 4C and the Muir Russell report censuring some climate scientists for not being more open with their data (but exonerating them of manipulating the scientific evidence)."

Got that? "Current" (as in 2010) pledges would lead to a rise of nearly 4C by 2100. This is now five years past and the "pledges" (non-binding) at Paris have been no different. So why would the 4C limit now suddenly be canned in favor of 2 C? It wouldn't. It is clear from the bravura performance in Paris, and the lack of openness by climate scientists (likely at the behest of gov'ts who provide funding) that no one wants to inform the non-scientific public of just how bad things are really going to get.

Meanwhile, a Guardian UK article from May 17, 2015 bluntly points out:

THIS is the unvarnished truth but you'd never know it watching the releases from Paris where they all appear to be zoned out on some other planet ....definitely not Earth. I mean, come on! If oil companies like Shell are already warning of a 4C world, why aren't our leaders doing it also? Well, because they believe their first mandate isn't to panic their populations with the truth. Better to keep everyone in nappies and sippy cups. Can't give 'em nightmares! Also, let's be frank, by the time the 6 month heat waves strike - and power grids crash from overuse- most of these leaders will be long gone - out of office.

The 1.5 C claimed threshold is also nonsense on its face. Indeed, to keep global temperatures from rising to only that level and no more  "man-made emissions of carbon dioxide would have to be reduced to zero by 2050." (WSJ, Dec. 12-13, p. A7). The chances of that happening are zero and none given the Paris agreement only requires developing countries to meet the goal "as soon as possible" (ibid.).  With that sort of slack wording all the participants ought to be charged with climate fraud!

As Steffen Kalbekken of the Norway-based Center for International Climate and Energy Policy put it (ibid.):

"You cannot say we'll stay under 1.5 C on the one hand and not say anything on decarbonization on the other hand."

So true! Unless, of course, you're into smoke and mirrors agreements.

Another absurd objective (ibid.)  already breached is the agreement by nations "not to emit more carbon emissions than can be absorbed by forests and other carbon sinks".

Seriously? Those sinks are already inundated! The forests are either being burned down or chopped down at a rate (e.g. for things like lumber for homes, or palm oil or fuel) so barely have any absorptive capacity to deal with increased emissions. See e.g.

So one wonders where the hell these illustrious leaders have been the past 20 odd years to even make such a daft proposal. As for the oceans, the other great CO2 sink, they are already near capacity in terms of how much more they can absorb.

The evidence over the past 5-10 years has been reinforced that not only is the acidity of Earth's oceans the greatest since the dawn of the Industrial revolution, but in the past 300 million years! Indeed, research available since 2012 shows our oceans may be acidifying faster than at any point during the last 300 million years due to industrial emissions, endangering marine life from oysters and reefs to sea-going salmon. And we won't even mention the phytoplankton which generate so much of the planet's oxygen!

The scientists from Columbia University, which led the research. have found surging levels of carbon dioxide in the atmosphere that forced down the pH of the ocean by overall 0.1 mean unit in the last century. This is 10 times faster than the closest historical comparison from 56 million years ago. It's deadly serious because - like the margins for ushering in a runaway greenhouse effect, the margins of safety for acidic oceans are extremely low. Hence, one can't tell by the small magnitude of numerical pH that the increment change is nothing to fret over.

As noted in earlier blog posts: the seas absorb CO2 from the atmosphere, forming carbonic acid. The particular chemical reaction is:

The lower the pH level in the seas ('7' is neutral pH), the more acidic they are. This is also worrisome because mass extinctions of marine creatures in the past have been linked to instances of ocean acidification. Thus the current incremental change could also threaten important species. This according to Baerbel Hoenisch, the paleoceanographer at Columbia who was lead author of the paper that appeared in the journal Science. As he noted:

A major concern issuing from the research is the future projected impact on the balance of ocean carbonate chemistry. This is no small thing! As observed by the authors of the article, ''Progress Made in Study of Ocean’s Calcium Carbonate Budget’ (Eos Transactions of the AGU , Vol. 83, No. 34), from August 20, 2002:

"Future decreases in sea water pH (and CO3(-2)) concentration will decrease the saturation state of the waters with respect to Ca CO3”.

This means that spillover effects become much more likely, as the saturation threshold is lowered, with masses of CO2 released additionally into the atmosphere. Melting ice from glaciers, etc. will then surely reduce further the sea water pH and accelerate the release of CO2 from the oceans ultimately triggering catastrophic release of CO2 from sedimentary carbonates, representing the largest reservoir of carbon on Earth.

In other words, what these Paris summit leaders have proposed is literally "a day late and a dollar short". Like the Warren Commission whitewash, it is a politically expedient charade designed to mollify global citizens and offer a PR "solution" . While the WC lulled Americans into a false political security, i.e. that no real conspiracy took out their president, this Paris summit has lulled the world's people into false security that the pitiful steps and "suggestions" in Paris will avoid a burning planet. This is because the REAL steps needed to even have a chance of limiting the increase to less than 4 C by 2100 (still less than the runaway threshold) are too much to bear. They would exact economic pain the likes of which can barely be comprehended - say a $5 carbon tax on every tank full.

As far as I've been able to see, the only politician who has proposed actual steps that could avoid the tipping point to the runaway greenhouse is Bernie Sanders. These include:

6- Impose a fuel efficiency standard of no less than 65 miles per gallon.

8- Provide clean energy funding to the rest of the world

Sanders estimates his prescription will yield a 40 percent reduction in emissions by 2030 and I suspect this is about right, though I'd argue the prescription would have to be applicable globally - not just to the U.S. (E.g. no offshore drilling worldwide, no fracking, NO coal burning etc.)

I would also argue that doing all these things means you cannot just "shut down" the nuclear energy industry as Bernie suggests. No, because if you are stopping so much fossil fuel production you will need nuclear energy to bridge the gap to get to more global alternative energy use. Even then, at that "arrival" point we will have to de-urbanize our planet because the more diffuse alternatives (wind, solar, geothermal etc.)  simply lack the energy density to support a vast industrial civilization. But no one seems to have processed that yet.

Leaving out Sanders' 'no nuclear' point, there is still no more chance of his plans being adopted than that aliens will land in the next year and provide us with limitless nuclear fusion.

But my point is, while current leaders will label his program "unworkable" and dead on arrival, it is exactly what is needed NOW to curtail the rush to oblivion. Because we farted away more than two decades debating this, instead of acting. we are now left with only draconian solutions - that could actually work.

The accord reached in Paris, meanwhile, is terrific for PR purposes and to make leaders feel like they actually accomplished something besides more hand waving. Heck, the apparent agreement among so many might even make global citizens feel all warm and fuzzy inside. Just in time for Christmas!

But the sober realist knows that it won't do anything to really stem what's headed our way. We had our chances after the Rio Summit, but we just pissed it away and wasted time in useless exchanges with the deniers.

Now we will very likely pay a price, a steep one!
Posted by Copernicus at 7:46 AM