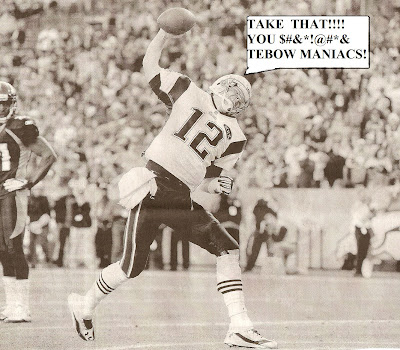 Overshadowing the Super Bowl itself-  now ten days away - is a new NE  Patriots' cheating controversy. This came to light in the wake of the AFC Championship game in which the Patsies blew out Indy 45- 7. Since then, an ESPN investigation (citing anonymous sources) exposed that the NFL has  found that 11 of 12 footballs used by  these cheaters were deflated in the AFC Championship game. (The NFL still hasn't concluded its own investigation.)

What do we mean here?

A deflated football is a helluva lot easier to handle - by QBs or receivers- in the rain or slippery conditions, as existed in Foxborough last Sunday. According to league rules, two hours before game time  the footballs (12 for each  team),   are measured and weighed by game officials to meet NFL specs-  this is indicated by being marked with the ref's signature.

Ten minutes before the game the balls are given to ball runners for each team. So how could ball deflation occur with such a small window of time?

CBS' Ron Mott demonstrated how last night on a CBS Evening News segment. As he noted - pulling out a small pump needle:

"In just a few seconds someone using a pump needle like this can insert it into the ball and release two or three pounds of pressure. Enough to gain an edge even if it's barely noticeable. "

NFL standards require pressures from 12.5  to 13.5 pounds per square inch for each football.  The ESPN source cites 2 psi less for 11 of the 12 Patriots' balls.

According to NFL rules:

"If any individual alters the footballs he will face discipline including a fine of $25,000"

But for many of us, especially after the earlier NE "Spygate" scandal, this is less than a slap on the wrist.

"I believe a suspension of the head coach might be in play depending on what kind of proof the NFL has and what kind of chain of custody they find on these stupid footballs."

This is a sentiment echoed by Gregg Doyel of The Indianapolis  Star, e.g.

What should happen? In the ideal universe and in a nation of moral rectitude - with its sports' standards to match - the Patsies would be summarily "DQ'd" from the Super Bowl. The stupid, useless 'Pro Bowl' scheduled for Sunday in AZ would be replaced by a special playoff round with the two NE- victimized teams, Baltimore and Indy, playing for the Patsies' place, to go against Seattle.

But in the real world that will never happen, and it's even unlikely Bellichick will be suspended. Indeed, many otherwise sober observers are treating it all as a big joke. NE QB Brady himself laughed it all off on a radio talk show interview and so did ex-sub par QB Matt Leinart who offered: "This is a joke, all teams fiddle with footballs". Which is kind of like saying in response to massive tax cheating, "this is a joke all taxpayers cheat".   Which is bollocks because many of us don't, believing paying taxes is an honor and helps the country pay its freight.

But this uncovers the ethical blind spot in many who also spout nonsense such as:

Which totally misses the central point:  cheating to gain an unfair advantage irrespective of the outcome, while destroying the integrity of the game itself - risking fan alienation similar to the PED effects in major league baseball. .  It doesn't matter if the final score was 70-7 or even  100-7, it is the principle  and the intention that we are about here. That so many Americans seem to have this ethical blind spot is disturbing and suggests the recent polls with a majority seeing no problem with CIA torture are no fluke.

Some also dismiss it all as "entertainment" which is the take of a person who probably lacks any discerning judgment or ethical radar, period. They are so inured to PR and media junk food, they are no longer able to discern flatulence from significance. Sad. But note this: if we disallow our most cherished sports and games adhering to principle or honor, why should we demand any principle or honor in regular life?

Hell, assassinations of heads of state are fine and dandy so are films depicting them, just don't do any to our guys! CIA torture?  No biggie. Rectally excavating a prisoner is just a "little discomfort" to use Dick Cheney's parlance. Hacking into another nation's computers to gain a spy edge? No biggie again, it's all good!

Once the small transgressions are permitted, all others can follow with even fewer apologias.

What would my sanction be? Well, I'd disallow ALL NE draft picks for this year. Zero.  None. Nada. Suck it up, cheaters.

But whether that happens or not, New England's legacy will be tainted, and alas, so also will this year's Super Bowl given the Pats will be involved in it.

Maybe it's just as well the Pack won't be a part of this year's  sorry spectacle.
Posted by Copernicus at 9:01 AM