Let's get it clear that the 70th anniversary of the liberation of Auschwitz and its commemoration in Poland (now a NATO puppet state) ought to have Vladimir Putin and the Russians front and center. It was the Soviet Army  that liberated that reprehensible Nazi concentration camp - not the U.S. (which was hundreds of miles to the west). Hence, by all standards of respect, civility and acknowledgement, the Russians ought to be there - and way, way before any appearance by Barack Obama (though I am glad he didn't go since Vladimir Putin isn't allowed).  Those who hammer Obama for not making an appearance really have no idea that he shouldn't be present in any case. The commemoration is mainly on behalf of the survivors and the nation state (Russia)  that actually liberated the damned camp. (Poland was a Nazi satellite state at the time)

The Russians also suffered far , far more than the U.S. and primarily in holding back the Nazi onslaught in Operation Barbarossa.  This "evil empire" (in Ronnie Reagan's Alzheimer's-  generated parlance)  saved the West's living ass as it turned back Hitler's troops in Barbarossa, at the cost of losing 20 million of their people. Think about that! How do you think America would have handled a vicious aggressor actually invading the nation and laying waste to major cities as the Hitlerites did to Russia? And losing 20 million?  (For some insight, google: "Battle of Stalingrad")

During Barbarossa, 5 to 6 million Red Army soldiers were taken captive by the Nazis, and of these more than three million died of disease (mainly typhus), forced labor and the brutal conditions to which they were subjected.  By contrast, the U.S. suffered 405,400 total  war deaths or barely 13.5 percent of the Russian losses - from deaths in captivity alone.

The Russians, having bravely decimated the Nazi war machine  to the point D-Day could succeed (without worrying about immense masses of troops and  thousands more Luftwaffe planes), then moved westward to meet up with the allies, on the way liberating concentration camps including Mauthausen, e.g. 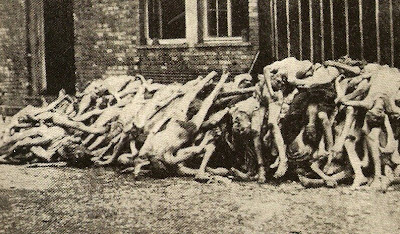 Photograph of hundreds of the corpses Russian soldiers encountered at Mauthausen in May, 1945.

They then also went on to liberate Auschwitz, and were the first to see what the Nazi vermin had wrought (including from the horrific human experiments) and also caring for the hundreds of survivors - including many Jewish children, who had to be  treated following Josef Mengele's experiments gone awry.

In specific Auschwitz liberation film records, for example, the liberating Russians beheld a 12 year old boy who'd  been infected with Leprosy and the results after just 6 weeks. In another segment, one watches with heart break as the bandages are removed from a 10 year old girl's foot, showing blackened flesh - after she had been forced to stand ten hours in freezing temperatures. In yet another segment, a 9 year old boy is unable to exercise or move either of his arms - they had been amputated and replaced with the arms of a 9 month old infant.

- Removed skin (treated with chemicals) from prisoners waiting to made into for chairs, and for use as art 'canvas':   In this case the selected bodies of certain gassed victims had their skin later removed and used to form the fabric for chairs - generally by the particular concentration camp Kommandant - and also for "art" canvas, with the art often pornographic.

- Bodies of fetuses (expelled by their mothers in the gas chambers) designated for autopsies.

Much of this is shown in vintage films finally accessible after the fall of the Soviet Union. I watched it in the 'Liberation of Auschwitz' part of the 5-pack collection, The Holocaust Testaments. Incredibly, the O.S.S. (forerunner of the CIA) was aware of many of the films but adamantly was opposed to any release or even exposure because they believed the materials to be Soviet propaganda. (The Auschwitz films are introduced by Simon Wiesenthal, of the Holocaust Museum, and I sincerely dispute he'd be introducing "propaganda"!)

I believe every American ought to see these films and see what part different allies had in liberating the Nazi death camps, especially the Russians who are given far too little credit and respect for their crucial role.

That the Russians, who liberated Auschwitz and actually treated survivors, are not present at the commemoration because of pique at certain recent Russian actions (in response to NATO incursions into Russia's sphere of influence, e.g. in the Ukraine) is absolutely abominable and unacceptable. For an occasion like this, political pique needs to be relegated to the sidelines to allow the proper recollection of the event - and acknowledgement of the Russian role. Poland and its NATO masters can return to their Russian -hating and subversive moves on her doorstep after the commemoration. See also:

To learn more about the history of Auschwitz: