Asteroids: May Not Be Exclusive Life Destroyers - But Also 'Creators' 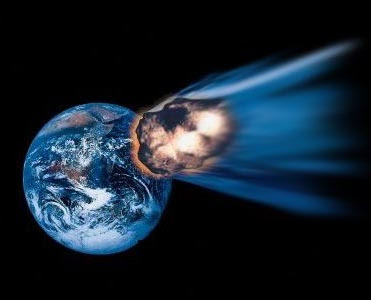 Recent experiments published in the Proceedings of the National Academy of Sciences evidently show that asteroids may not be only destroyers of life, but also "creators" - well, ok, triggers for its later development. Basically, scientists in a lab used a powerful (1 billion kw)  laser to re-create what could have been the primordial spark of life on Earth.

They zapped a mix of clay and a chemical soup with the laser to simulate the energy of an incoming asteroid which usually enters the atmosphere of a speeds of 11,000 m/s.  to 30,000 m/s. The result? Crucial building blocks of life emerged - which bears similarity to the Miller-Urey experiment.

Recall the Miller and Urey experiment basically applied an electrical discharge to a chemical brew resembling the Earth’s primitive reducing atmosphere. This brew included ammonia and methane, as well as hydrogen and water vapor. The effect of the discharge transformed the mix into a diverse yield of organic compounds. These included amino acids, as well as substances such as formic acid and urea that normally occur in living organisms.

In the latest study, the researchers concluded:

"These findings suggest that the emergence of terrestrial life is not the result of an accident but a direct consequence of the conditions on the primordial Earth and its surroundings."

Is that extravagant? Well, the experiment produced all four chemical bases: A (adenine), C (cytosine), G (guanine), and T (thymine), to make RNA, a simpler relative of DNA which is the blueprint for all terrestrial life. Like DNA, RNA is a polymer, but much simpler. This is because the latter’s ribose sugar molecules are smaller than DNA’s deoxyribose sugar molecules. So there are fewer monomer units in all to make polymer chains

What is notable about this laser experiment is that it's the first to test the theory that the energy from an asteroid impact could trigger the crucial chemical reactions.. By contrast, the Miller-Urey experiment presumed monstrous electrical discharges say from lightning strikes - to incept the amino acids in the primitive Earth.

According to lead author, Svatopluk Civis, his team used a laser almost 500 ft. long which operated for only a fraction of a second in order to impart the chemical soup with the requisite energy.  Civis averred that the power was so intense and concentrated that for less than a billionth of a second it equaled the output from "a couple of nuclear power plants".

Specifically, the laser beam produced roughly one billion kilowatts over a fraction of an inch generating heat of more than 7,600 F. The energy equivalent would be mind boggling and interested readers can work it out for themselves using the equation relating power to energy and time: E = P/t.

Why use an experiment based on an asteroid impact? Basically, because the emergence of the earliest life forms on Earth coincided with  period called the 'Late Heavy Bombardment' - when the asteroid belt was significantly larger and asteroids struck the Earth more often.  This is according to the study's co-author, David Nesvorny, of the Southwest Research Institute in Boulder, Colorado.  He notes that in the epoch referred to asteroids bombarded Earth ten times more frequently than before or after.

Of course, there are also the inevitable naysayers. For example, one researcher - John Sutherland - of the MRC Laboratory of Molecular Biology in Cambridge, England, insisted the amount produced of one base was so small that "the results don't seem relevant".

But Steve Benner, a prominent biological chemist, has maintained that the experiment is quite relevant because it produced the starting material that would have been around in the early Earth - irrespective of amount.

As standard for scientific practice, we will have to await further confirmation of the laser experiment to see if similar results can be obtained - or even enhanced.