Milk: How To Make It Better - Without the 'Moo' 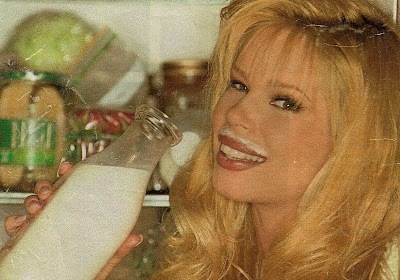 Despite the image of the young lady gulping milk down from the bottle, let us admit that milk doesn't have the best rep or PR. While our ancestors, some 8,000 years ago, got the brilliant idea to collect and drink animal milk - leading to a kind of natural consumption - things had changed radically by the 21st century. Now, milk production is an industrial process and cows are actually administered special hormones(e.g. rBGH)  to induce higher milk production. Many (e.g. PETA) believe these hormones are responsible in large measure for many problems - including spurring adolescent females to earlier sexual maturity, and inducing prostate cancer in male milk drinkers.

PETA generated an intense campaign a couple of years ago, including an over the top video ("Milk Gone Wild") featuring gyrating young women equipped with giant udders,  dancing in a club  and  spurting milk all over the place to the delight of delirious males lapping it up. The point they wanted to try to get over is that cow's milk is bad for you and they paired the "Got Milk?" ads via parodies against "Got Prostate Cancer?", "Got Gas?", "Got Pus?" and other high impact PR, imagery.

The video - if you can stomach it- can be seen here:


Carol J. Adams (The Sexual Politics of Meat: A Feminist-Vegetarian Critical Theory) and a vocal advocate of veganism has argued:

"Eating meat and ice cream is a privilege of being a human being who can oppress other animals. It comes as no surprise to me that we take something oppressive -the extraction of milk from a cow -- and extend it to women!"

“Why is it that, as adults, we find human milk distasteful, but we find animal milk palatable Humans are the ONLY species who drinks the milk of another species. Now that's distasteful!! So, if you were looking for a perspective even higher on the "gross-o-meter" than cheese made from human milk-you just found it!”

As the milk battles continue a new way may have appeared to produce milk proteins without having to worry about the adverse effects of hormones, or antibiotics.  The basic steps were reported in an issue (June 28) of New Scientist, noting first that each of the key milk proteins has a known amino acid sequence in a free database. Thus, "it is easy to convert the amino acid sequence into a DNA sequence."

It is then "simple to order this DNA from research companies". One then mixes the genes into a population of yeast using a chemical or electrical stimulus to get the DNA into the yeast cells. The internal machinery of the cells then churns out the proteins, " a lot like brewing beer."

The only remaining ingredient, but primarily for taste, is fat. Fortunately, dairy scientists have already developed healthy, plant-based oils with aromatic fatty acids - the same ones that give rich ice cream its flavor. All that remains is to combine everything with sugars, minerals and clean water in the right ratios to obtain a tasty, nutritious, white liquid which consumers will buy.

Beyond the chemistry, the transition from animal-based milk to the non-moo form is a business problem: How to scale the process up and ensure that it's economical? How to then get this milk onto shelves where it will have to compete with the real cow-extracted version?

Those are the questions to be addressed.

Will PETA and other activist groups accept this novel form, as opposed to making over the top videos about it?

That remains to be seen.
Posted by Copernicus at 10:33 PM