"Food is the most fundamental of all human needs. Hungry children can't learn, hungry adults can't work, create or think or be functioning members of their communities"- Abby Leibman, MAZON, 'Bread for the World' 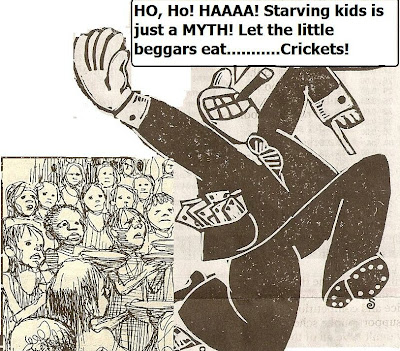 The statistics have been so often repeated that they should be ensconced in nearly every reading American's brain by now.  But to repeat some of them: The past ten years have seen 80% of Americans lose in income, many falling out of the middle class, meanwhile the other twenty percent have ratcheted up gains - especially the top 10%.

The inequality in the U.S. has never been higher, now rivaling Mexico and the Philippines  - with a Gini coefficient approaching 0.5. (A Gini of 1.0 denotes total income-economic inequality, while 0.0 denotes complete economic equality.)

15.6 million kids go to bed hungry every night because of cuts to food stamps, most recently as part of a Farm Bill which delivers huge subsidies to rich, corpora-farms.  Economist Jared Bernstein has put it this way:

"It's like don't look at all the ways in which the economy is underperforming, and the benefits are flowing right to the top. Look at the people getting $4.50 a day for food stamps. It's an old trick but it continues to be used."

The "trick" is also used against people getting "entitlements" (the egregious term used by Neoliberals) such as Social Security and Medicare. Look at Abby Huntsman's rant on the Cycle last week, e.g. http://www.latimes.com/business/hiltzik/la-fi-mh-abby-huntsman-20140314,0,489874.story#axzz2w9RuRdqG

Then there was the biased, nonsensical column by George Will last Sunday in which this pinhead bitched that:

"The welfare state, primarily devoted to pensions and medical care for the elderly, aggravates inequality"

But in typical  S'Will' fashion doesn't say WHY.  If the young ones knew that the gov't had taken $1.79 trillion out of Social Security since 2000, they'd also understand they wouldn't be the ones having to shoulder much of the theft. (Given they are the ones mainly still working).  Or, if they knew the government spent that money instead on 'wars' in Afghanistan and Iraq they would be hopping mad and be able to blame the right culprits, unlike their dimwit peer, Abby Huntsman.

The 'welfare state' Will describes is also a myth. People on 'welfare' - thanks to Neolib Bill Clinton's "welfare reform" law in 1996-  now have to work for their benefits, usually below minimum wage. (In Maryland it has been $3.30 for a long time).  Medicare and Social Security are NOT "welfare" - though morons like Will might like to believe it - because people have paid in taxes to receive those benefits (which those earning over $113,000 don't have to!) They also must pay added medical costs for Medicare, which doesn't cover dental, or all of treatment-surgical expenses. It is estimated that a typical couple retiring at 65 will need $220,000 to cover added medical costs over their retired lives. How the hell is that "welfare"?

The low -wage "bottleneck" described in the Business Section of the Sunday Denver Post also shows why all the above problems aren't going away any time soon. ('Low Wage Bottleneck Traps Many', p. 3C). The article describes a jobs "bottleneck" since the recession in 2007-08, such that mid-level jobs have essentially vanished. These were generally the next step jobs after minimum wage or "entry level" - but  no more.  As the article puts it:

"This means lower wage workers have to stay put.  The resulting bottleneck is widening the gap between the richest Americans and everyone else. "

The article goes on to note that these low wage jobs, once seen as only 'steppingstone' - not permanent- are now being held for long periods by better-educated, more experiences workers. In other words, the young are generally even shut out in this niche.  The article continues:

"The trend extends well beyond Walmart ...and is reverberating across the U.S. economy. It's partly why average adjusted income has declined 9 percent for the bottom 40 percent of households since 2007, even as incomes for the top 5 percent exceed what they were before the recession."

Research also shows that ninety percent of the occupations that "once helped elevate people from the minimum wage" have gone the way of the Dodo since 1991.  These include: bookkeepers and executive secretaries which occupations used to command $16.54 an hour on average. In addition, the associate professor at university level is becoming  thing of the past. The percentage of teaching positions occupied by non-tenure-track faculty has more than tripled in the past four decades. According to the Adjunct Project, “Two-thirds of the faculty standing in front of college classrooms each day aren’t full-time or permanent professors.”

70 percent of college courses offered are now taught by adjuncts — part-timers who are paid a pittance and have no job security. Many indeed, have to go on food stamps along with the minimum wage workers at Mickey D's or Walmart. This has only come to the fore recently with a widely circulated article, 'The Ph.D. Now Comes With Food Stamps', published in The Chronicle of Higher Education. See:

All of which brings us to the idea of an automatic income for all, with no strings attached. This minimum income, or 'min-come' would assure that no matter the vicissitudes of life, the citizen and his children will never have to go hungry or submit to the vagaries of "food stamp" politics. He or she will receive an automatic income of at least $1,000 a month to cover all basic needs - irrespective of whether having another job or not. There will be NO "offsets", so long as the person or family is below the level of those whose incomes aren't falling over time. (I.e. the upper 20 percent).


This is not some new idea, btw, so no need for anyone to get hysterical.  All over the world, sensible and intelligent people are talking guaranteeing basic incomes for citizens as a viable policy.Half of all Canadians want it. The Swiss have had a referendum on it. The American media is all over it: The New York Times’ Annie Lowrey considered basic income as an answer to an economy that leaves too many people behind, while Matt Bruenig and Elizabeth Stoker of The Atlantic wrote about it as a way to reduce poverty.

In his final book, Martin Luther King Jr. suggested that guaranteeing people money without requiring them to do anything in exchange was a good way for Americans to share in prosperity. In the 1960s and early 1970s, many in the gave the idea serious consideration. Even Richard Nixon supported a version of it. But by 1980, the political tide shifted to the right and politicians moved their talking points to unfettered markets and individual gain. In other words, the odious Neoliberal idiom had taken hold like a plague, polluting brains and polluting economics - as all and sundry became hostage to the "market god".

Advocates say it’s an idea whose time has finally come, and I concur with that - though doubtless our home bred Puritans and Calvinists will demand some kind of output to receive it - but why? The rich, according to Michael Parenti ('The Dirty Truth') , get 95% of their money from inheritance. They don't have to do a damned thing!  Besides, in  a world of chronic job insecurity, stagnant wages, boom-and-bust cycles that wipe out ordinary people through no fault of their own, and shredded social safety nets, proponents warn that we have to come up with a way.

Look at the benefits!

1) It would help fight poverty: is the richest country in the world, yet widespread poverty continues to afflict us. (See above for the low -wage bottleneck reasons for this!)

Matt Bruenig calculated that by giving everybody a mere $3,000 a year, including children (who would receive the money through their parents), we could potentially cut poverty in half.

2)  It would be good for the economy: A basic guaranteed income has the potential to positively impact the economy in several ways, which is why economists from John Kenneth Galbraith to Milton Friedman have advocated it. The basic problem solved would be low aggregate demand.

3) It would be more efficient than present hodge podge of systems: In the current patchwork of systems confronting poverty, like welfare, food stamps and vouchers, people can fall through the cracks. A guaranteed income could help solve problems caused by rules and restrictions that leave some without subsistence income when they need it. It's automatic nature - merely by having a birth certificate or S.S. number ensures receipt.


4) It supports  basic human dignity: Why is living in dignity not a right? These days, even Americans who get up in the morning every day and report to full-time jobs may not earn enough for a decent standard of living. People like fast-food workers, big-box store employees, caregivers (paid and unpaid, i.e. in families), beauty salon workers, and farm hands often can’t earn enough to feed their families and keep a roof over their heads. Millions have seen no real increase in earnings in decades. Material security, as well as the intangible things that come along with it, like self-esteem and peace of mind, are often out of reach.  A guaranteed basic income is one way to help people to survive with dignity and free them from the humiliation of having to participate in criminal activity.

Of course, the knuckle draggers will howl like stuck pigs and banshees at all of this:

"Get money for nuthin'? Are you nuts? Where's the money gonna come from to support it?"

Easy, Sparky! We stop acting like a World Empire - projecting our self-interest hither, thither and yon -  spending trillions a year on 'occupations', military toys (like the F 35) and adventures, and start taking care of our people at home, and of course, tending to our crumbling infrastructure.

We do not need 4,400 military bases all over the world, nor can we be the permanent cops of the world. It is madness to believe so.  It is now time to take care of business at home and an automatic income would go a long way in that regard.

Posted by Copernicus at 9:10 AM