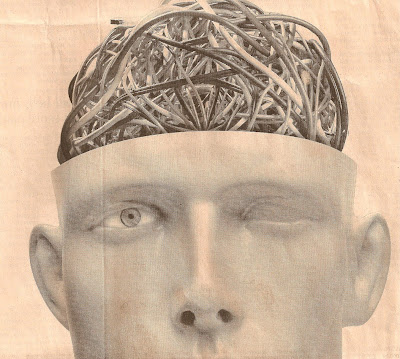 Quantum Man: Complete with a quantum computer interface and melding quantum dots to his neurons, he will no longer be subject to the vagaries of monoamines triggered into activity by the god gene, VMAT2.


In a previous blog, expatiating on the forms of Materialism:


I ended by noting how close we are to uploading human neural maps into super-computers to gain a form of immortality. (Explored in the new TIME magazine and its feature article: '2045: The Year Man Becomes Immortal'. But the other side of this coin is the possibility of interfacing the human brain with a quantum computing neural processor that would enhance the brain's capabilities by nearly ten billion fold. It would be about the same comparison as Homo Habilis to our modern human.

Of course, this can't fully be achieved until the details of quantum computing are finally nailed and we still have a long way to go, especially in resolving the "entanglement" problem - whereby quantum bits (qubits) can be nonlocally associated with distant entities outside the system. Until there is some measure of control here, workable -feasible quantum computers will remain largely a pipe dream as well as human quantum cyborgs.

But hey, it's nice to speculate what may well be closer than we believe (at least according to a recent Financial Times piece: Mind Games, Feb. 17, p. 7).

What other advantages would accrue if the human brain could be re-wired into a full-fledged quantum computing mobile system?


I noted that with the advent of quantum dots and smart sensors integrated into neural networks (embedded in the human brain) we'd finally have the wherewithal to dispense with the Reptilian Old Brain. That is, the atavistic source of anachronistic delusions, territoriality(leading to wars), prejudices, and overall superstitious foolishness which is holding our species back.

No more stupid "demons" or "Satan" to worry over because those parts of the brain that elicit them will be co-opted by new circuitry (shown in the neural network scheme depicted in the blog - Fig. 3). The improved processing would thus leave more time for higher order discovery, thought, analysis, mathematics, and maybe even some advanced physics study - but no wasting time with antiquated primeval rubbish. (And books that focus on such)

Thus, the new quantum-based Brain would no longer require the garbage of the Old. In the same Fig. 3, I showed a neural network which can form a plausible and practical basis for an interfacing nexus to a quantum cyber-processing unit.

Retooled using quantum dots, this brain could no more support a thought about "demons" or "Satan" or "Hell" than Stephen Hawking's could conceive fairies causing black holes, or worm holes. It would explode first! (Well, not literally, but we might expect some very severe headaches as the cortical thresholds attempted to so ideate would be ovecome by the voltages arising from the quantum gate interactions.)

In effect, with correct placement of quantum dot NOT gates in the hidden layer, it would be possible to alter an input (0, 1) to an output (0,-1) say at the bias point φ(0). That switching effect will then transfer to the output layer, inverting the outputs for the k = 1, 2,.....m neurons principally for the points y(1), y(k=j) and y(m). The key advantage of the RBF over an MLP network is that the RBF leads to better decision boundaries and improved classification of the information from the hidden layer. (Which might be very critical since not all information going to the brain's amygdala (the putative Old Brain center) is negative. Some is available evolutionarily, for example, to arouse an alert for a real threat!)

WHY is this important? It turns out that researchers have isolated what is called a "God gene", designated VMAT2 that when assessed for polymorphism is found to enhance "transcendence scores" (or supernatural ideation - god belief tendencies) by 7% of the mean (See the book: The God Gene, by Dean Hamer, p. 77).

Associated with the religious -god belief dynamic are the monoamines, which Hamer describes as the "biochemical mediators of emotions and values". However, as he points out (p. 103) these chemicals aren't freely available to the brain but must be "unwrapped" for use, and this is where the presence of the VMAT2 gene enters.

Monoamines are about the size of an aspirin molecule and synthesized from amino acids. They're so named because they're comprised of a single amine: a chemical unit comprising a single nitrogen atom affixed to three hydrogens via short chains of carbons, e.g. (one branch omitted in sketch for drawing convenience):

In addition, these monoamines are produced by the neurons of the brain and form a kind of "lingo" with cells communicating to one another, given whatever the response might be.

Within this system one can extract and conceive how high-powered religiosity and even bible - banging arises once the VMAT2 gene is present to "unwrap the monoamines".

Thus, an initial action - say opening the Bible and finding some idea (like "Hell" for unbelievers) resonates and triggers value-based and emotional arousal via the release of monoamines. If one could "translate" the language of these monoamines and their effect on the pre-frontal neurons it might read something like:

"This Hell idea is GREAT! It solves the problem of those unbelievers who think they can get away with their unbelief in this world! They get payback in the next!"

Okay, but let's imagine a different scenario: what if the VMAT2 gene is present, but the monoamines aren't allowed to be triggered (or rather they can be triggered, but subsequently neutralized via chemical reactions) and their messaging is replaced via quantum bit (qubit) linkages and transference in the same neurons? This is exactly what the RBF neural network system I depicted in the earlier blog link would allow! Thus, those Pauli spin operator gates present in the cyborg unit would instantly neutralize each monoamine as soon as it's produced, perhaps by converting it to an indole amine - like serotonin.

If the serotonin was then capably regulated via the same neural network interface, we'd expect something like a tranquilizer to take effect on the believer's brain, making him less intolerant, less self-righteous and okay....likely less self-transcendent and overall religious. What might we behold from this? Most plausibly I'd forecast a much larger increase in the non-religously affiliated, maybe from the 15% today to perhaps 75% or more. Meanwhile, religious affiliation would plummet for all the new breed of Quantum Humans, for whom it would become redundant.

What of atheists? It seems clear that atheists likely lack this VMAT2 gene, or if they have it their neurons (perhaps on account of more rapid synaptic firing) inhibit the activation of monoamines' influence to attain the same cortical thresholds as occur in believers. Still, most atheists would likely opt for the quantum cybernetic fusion to expand brainpower if for no other reason.

Is there an evolved form of godless human on the horizon? Maybe, and we might call him "Quantum Man". He will never read a Bible - KJV or other, nor will he be capable or plowing airliners into buildings filled with thousands of people, nor will he kill those who provide abortion services, and he certainly wouldn't entertain psychotic ideations such as "Hell" and threaten his fellow beings (human or Quantum) with them. Indeed, this new being would welcome any atheist as President of the US of A, as opposed to religiosity-besotted Neandertals.
Posted by Copernicus at 10:39 AM