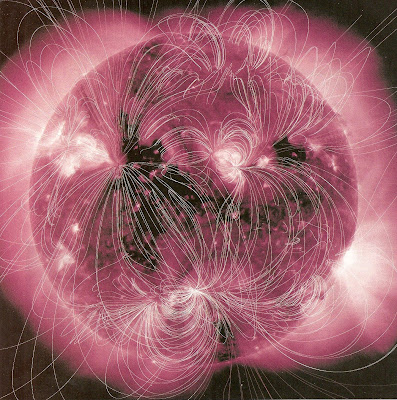 Image of solar corona taken at 211Å by the Atmospheric Imaging Assembly of the Solar Dynamics Observatory (SDO).


As the new solar cycle ramps up much attention again will focus on the Sun's corona. Tnanks to new imaging tools, with increased optical as well as temporal resolution, we ought to be getting unparalled images of the outermost atmosphere of the nearest star. Of particlar relevance here will be the Atmospheric Imaging Assembly, built for the Solar Dynamics Observatory by the Lockheed Martin Solar Astrophysics Laboratory.

The device, since installed, has been taking high resolution images of the corona in multiple wavelengths, from the near to the extreme ultra-violet (UV). Shown in the graphic is one of the representative images taken at 211Å, taken last October. This corresponds to the corona's characteristic temperature of 2 x 10^6 K. It is also the wavelength most sensitive to magnetically active regions (ARs) and we see white lines superimposed on those field lines.

Among the interesting questions pursued in the past century was whether the corona was static or not. In a static case its boundary would be more or less fixed, there'd be no expansion even in times of high solar activity.

Of course, a static corona seems (on first blush) to be quite reasonable but that is why it is necessary to test that this is so. The first one to do this was Sydney Chapman. He began by first assuming the condition for hydrostatic equilibrium applied:

where G is the usual Newtonian gravitational constant, and rho defines the plasma density for the corona, while M_s is the mass of the Sun, and r the distance from the solar center:

From the above eqn. one should be able to show:

Analogous to the temperature formalism, we have, the pressure p(r) at some distance defined by:

Now, if one allows r to approach infinity, e.g. r -> oo an interesting thing occurs in the equation, as we can see. That is, the denominator of the first term in the end brackets becomes so large (R_o/ oo) that the first term vanishes.

where ‘k’ denotes a constant composed of all the constant quantities in the previous eqn. (G, M, m(p) etc)

Substituting the give values into the above, one finds p(R_o) multiplied by a factor

If the static model were accurate, the pressure at infinity should be zero, p(oo) = 0, not a small finite pressure that’s effectively equal to the coronal base pressure. This finding led to the further investigations that disclosed a solar “wind” had to flow outwards from the corona.

Hopefully, with the new imagery devices in place, we can learn much more about the actual dynamics of the corona in the new solar cycle!
Posted by Copernicus at 9:00 AM