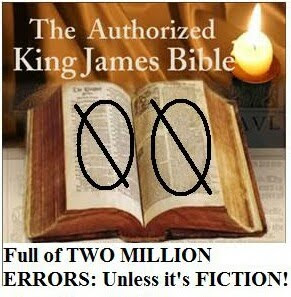 The Bible held out by my bro to be my "salvation" (at least for possible future food poisoning) is actually so replete with factual and other errors as to be essentially useless. Certainly, it turns on its head any assumption of "biblical inerrancy". As I said before in earlier blogs, the very existence of ONE error means the WHOLE claim of inerrancy fails- since to be literally "inerrant" means ZERO errors! No margin for any mistakes.

Let's look at some examples of factual errors, returning to one I showed before in Genesis:

“In the beginning God created the heaven and the earth. And the earth was without form, and void; and darkness was upon the face of the deep. And the Spirit of God moved upon the face of the waters. And God said, Let there be light and there was light. And God saw the light, that it was good: and God divided the light from the darkness. And God called the light Day, and the darkness he called Night. And the evening and the morning were the first day”

The “light” referred to in the last three sentences is none other than the SUN. However, it's clear from reading each line through that the Earth was supposedly made BEFORE the Sun. (E.g. Earth without form, darkness upon face of the deep).

But this is physically impossible. We know from modern astrophysics that the solar proto-nebula had to collapse first to yield the SUN. (No planets, since they had yet to spin off the collapsing nebular cloud – it hadn’t cooled enough to allow it). As the proto-solar nebula collapsed it also began spinning and gained angular momentum. This angular momentum was then transferred to regions of the nebula that cooled and separated from the whole, and these regions became separate clouds of dust and gas that aggregated into the planets.

As more angular momentum was transferred – the planetesimal’s (each one) acquired their own spin (in a period of revolution) and specific shapes. Thus, the Earth spun off about 1.1 billion years after the solar nebula fully collapsed, and it could not have come BEFORE the Sun. Indeed, the absence of the central mass of the Sun, or ~ 10 ^33 kilograms, the Earth would've instantly been hurled toward the constellation Hercules at 12 miles per second with no central mass to keep it in check. We can compute this exactly using the basic principles of celestial mechanics.

It is clear from this that Gen.1:1-5 has stated a patent impossibility which violates all known laws of physics and dynamics and is therefore WRONG!

"He made a molten sea, ten cubits from the one brim to the other: it was round all about, and his height was five cubits: and a line of thirty cubits did compass it round about."

BUT: Circumference = π x Diameter, which means the line would have to have been over 31 cubits. In order for this to be rounding, it would have had to overstate the amount to ensure that the line did "compass it round about."

"All fowls that creep, going upon all four, shall be an abomination unto you."

Fowl do not go upon all four.

"And the hare, because he cheweth the cud..."

"...as the camel, and the hare, and the coney: for they chew the cud, but divide not the hoof."


This is wrong on two counts: Hare don’t chew the cud and they do divide the "hoof."

"...Jonah was in the belly of the fish three days and three nights"

"...Jonah was three days and three nights in the whale's belly..."

Two errors: first a contradiction between "fish" and "whale"(between biblical verses) and second, whales and fish are not related. (Whales are the largest MAMMALS)

"the kingdom of heaven is like to a grain of mustard seed which…is the least of all seeds, but when it is grown is the greatest among herbs and becometh a tree."

There are two major errors here: first, there are many smaller seeds, like the orchid seed; and second, mustard plants don't grow into trees.

"Again, the devil taketh him up into an exceeding high mountain, and sheweth him all the kingdoms of the world, and the glory of them."


Unless the world is flat, altitude simply will not help you see all the kingdoms of the Earth - a point made in a prior blog.


Conclusion: the Bible (KJV or other) cannot be a “divinely inspired” book. Rather it is a HUMAN-inspired work with all the errors one expects humans to make.

Like the reckless use of language in general (to signify things that can't exist - "fairies", "God", "abominable snowmen") one must regard the Bible only in a metaphoric as opposed to literal sense.

Keep your Bible, Mikey, I'll stick with the Echinacea. At least the early Native Americans had more on the ball than your ancient Jewish sheep herder "writers"!
Posted by Copernicus at 3:22 PM

I guess I'll be the first.

2,000 years ago, human beings were divided between the religious and the atheists. However, both sides agreed on some things.

1.) The Sun revolves around the Earth
2.) The Earth remains still
3.) The Earth has four corners
4.) There is a bottom and a top to the planet like a cube

While none of these things are true, EVERYONE believed it 2,000 years ago - and that includes atheists. Atheists would laugh at the idea of our universe being created by God, yet they also believed the Sun rotates around the Earth, and those same atheists back then would laugh at anyone claiming the Earth moves around the Sun.

Galileo proposed that the stars out there were other suns and planets. He was thrown in prison for his beliefs. The world was not ready for his scientific breakthroughs. But he too was a devout believer in God.

Atheists didn't "laugh" at the idea of our universe being created by a God - it was simply redundant within their philosophical and scientific scheme, i.e. the Greek Epicureans and atomists like Demokritos.

Yes, they likely also would howl at the Earth moving around the Sun but that was because the heliocentric concept had not yet been put forward. It would have to wait thousands of years for the arrival of Copernicus.

Galileo, yes, may have been a devout Catholic, but he was first and foremost a scientist and skeptic and this is what landed him in the Inquisition's grasp and in prison.

On that note no more comments or responses will be published as this is an old blog post.