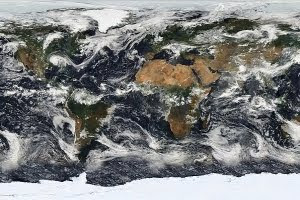 Little known by most Americans, a  Cold War satellite project ("Corona")  - endorsed and used by the CIA - played a major role in showing the extent of human damage to ecosystems.  Originally designed to monitor Soviet missile sites, naval bases and the movement of warships, the program later delivered startling images used to track glacier movements in central Asia, shoreline changes in Saudi Arabia and ice loss in Peru.

Once accessed, the Corona imagery in spy photos could uncover a landscape's history beyond the contemporary era.  Basically, the 60s'-era snapshots captured habitats before humans drastically altered them, i.e. by inundating them, plowing them up,  or replacing wild spaces with hydroelectirc dams, farmland and industrial zones.

While the spooks had little use for Arctic and Antarctic images they provided a dazzling panorama of climate insight to environmentalists and climatologists.   This was because the Earth's poles were rapidly becoming hot spots of global warming and melting ice.    According to D. James Baker, who directed the NOAA from 1993 to 2001:  "It gave us the first real measurements of the ice budget- how much loss there is from season to season" .

Instrumental in all this was Linda Zall, whose climate role for the CIA began in 1990 - when then Sen. Al Gore wrote the agency and asked it to examine whether its spy satellite fleet might address environmental and climate riddles.  The answer entailed the recruitment of Zall and the rest, as they say, is history.   This included how changing climate could trigger security issues and crises.

Now fast forward to the present. We have learned the year 2020 globally tied with 2016 as the warmest on record, a signal of the increasing impact of climate change on the planet.

The global average temperature in 2020 was about 1.25C warmer than the pre-industrial period of 1850-1900, according to new data from Copernicus, the EU climate monitoring center, which said the primary cause was higher levels of carbon dioxide in the atmosphere.

The record heat pattern triggered deadly wildfires last year, including in Australia in January and across the U.S. West Coast in September.

“This was a signal that developed last winter, continued through the spring, and the summer — it is a real signature for the year,” she said.

Parts of the Arctic and northern Siberia were more than 6C warmer during 2020 than their historical average, according to the Copernicus data. A temperature record of 38C was recorded in northern Russia, inside the Arctic Circle, in June.

The combination of rising temperatures, extreme wildfires and severe hurricanes and floods have all helped to make climate change a top priority for the world’s biggest emitters. Indeed, dozens of world leaders have set new climate targets in recent months, including China, Japan and South Korea.

About 34bn tons of carbon dioxide were released last year from burning fossil fuels, according to the Global Carbon Project, significantly lower than the previous year.

However, those emissions still pushed carbon dioxide concentrations to historic highs, because the gas lingers in the atmosphere for decades.

Europe also saw unusual heat during 2020, and was 0.4C warmer than 2019, which was the previous warmest year for the continent.  According to Samantha Burgess:

“The fact that Europe was so much warmer is very indicative of our atmosphere having more CO2 and being warmer than it otherwise would have been,”

Adding that Europe was now warming faster than the rest of the planet.

The warming trend in 2020 is even more significant because it occurred during a year when the La Niña weather pattern developed, which is typically associated with cooler temperatures.  (The previous record for the hottest year, set in 2016, was distinguished by the counterpart El Niño pattern that contributed to the temperatures that year. )

The warming trend is also significant given U.S. greenhouse gas emissions from energy and industry plummeted more than 10% in 2020, reaching their lowest levels in at least three decades as the coronavirus pandemic slammed the brakes on the nation’s economy.  This according to an estimate published Tuesday by the Rhodium Group.  What this shows is that the rest of the world more than offset the U.S. greenhouse gas decreases, along with the already emitted CO2 from previous years.

Posted by Copernicus at 7:12 AM