That Holman Jenkins Jr.is a clown and lying buffoon is self-evident as soon as one reads even a half dozen of his WSJ columns. One commonality I've found is that he attempts to get readers to think or believe that events or incidents they've seen didn't really happen the way perceived.  For example, when Trump idiotically asked his then Covid team about the possibility of "injecting bleach".  According to Jenkins in one of his more egregious columns ('Disinfecting Journalistic Ethics', WSJ, May 6, p. A13):

"It was a reporter in the audience who asked an accompanying official, 'The President mentioned the idea of cleaners, like bleach and isopropyl alcohol.  There's no scenario then that that could be injected into a person is there?"

In response to which I pointed out (May 6, 2020) Trump's own words from multiple media accounts, as well as actual clips, e.g.

"We can do something like that, by injection inside or almost a cleaning?"

Did Trump really say it?  Of course he did as it exists in this universe, in objective reality. Check out Preznit Quack's words in this video for yourself:

How many different ways can that be interpreted anyway?  Is a "reporter" asking a leading question or is Trump popping off on his own?    But see, Jenkins is depending on readers not to check out his words and claims.  Rather he's confident they'll be too lazy to investigate.  That way he gets to blab whatever the hell he wants and tease reality into what he wants it to be.  In the most recent example (WSJ, January 9, p A13) he writes:
"In the end most of the invaders of the Capitol behaved more like tourists than insurrectionists."
An insane claim solely designed to mute outrage at what transpired January 6th and to try to make those watching the ghastly terror think twice before passing judgment on they saw.  But on viewing dozens of clips and news segments - including the most recent- no where did I behold "tourist" behavior.  Smashing windows, manhandling property, fouling it with assorted excretions while laughing like hyenas, stealing furniture or breaking it apart on the floor - is not tourist behavior.  Nor is walking around with plastic zip ties, generally used by crooks to bind victims. And that is just for the set that didn't also smash their way into the House chamber and assault the D.C. cops with all manner of cudgels and profanity - not to mention parading with Confederate flags.   Indeed, the very act of breaking into the building - e.g. by smashing windows and doors-  places the invaders as just that, no better than felons breaking and entering a property - not "tourists".
Jenkins at one point even makes a lame effort to try to compare what happened to the George Floyd protests, in the sense of cop reactions.  But as even his fellow WSJ columnist Gerald Seib pointed out in the same issue ('Mob Attack Unites A Nation, Party', p. A4):
"In fact, the violence at the Capitol was different from anything that preceded it. People acting in the name of one president, and inspired by him, broke into the Capitol to stop the transfer of power to the next president.  In do doing, they assaulted a building in which the top three people in the presidential line of succession were in the same room. A move that would be considered an act of war if perpetrated by n outside power."
Say this for Mr. Seib, he at least is cognizant of existing reality as well as history and constitutional significance.   He also is aware, given what he wrote, that those who stormed the Capitol had to have that Trumpian "inspiration" in mind, so could not be called "tourists" or compared to tourists.
But Jenkins' transgressions of reality don't stop there. He also tries to spin the asinine fable that it was the "Steele dossier" and "Russia hoax" that "made 2020 election fraud plausible to millions of Americans."  That "fraud", or at least belief in it, is then what set the MAGA  whackjobs storming the Capitol.
But he never logically shows how that would work, probably because he can't. Not if he was a serious journalist as opposed to a bumbling clown.   One can only surmise that after countless right wing media sources repeatedly framed the Mueller investigation and report as a "hoax" - along with Christopher Steele's dossier - enough millions of dummies (including the MAGA heads)  believed it. But of course this is disingenuous tommyrot.  Trump came out of the gate illegitimate because he was.  As former federal prosecutor Mimi Rocah made clear on a segment of 'All In'  a year ago:
"There's just so many facts in this indictment about the coordination of the Trump campaign with Wikileaks, through Roger Stone. Remember that GRU indictment - if you go back to that- one of the objects of the conspiracy is not just hacking but hacking and disseminating.  You can't look at them alone, you have to go back to everything we know, the Trump Tower meeting, the calling out by Trump to Russia (to grab Hillary's emails)...there's just so many other things."

Rocah put her former federal prosecutor's finger on exactly why the reactionary Right media was able to peddle this balderdash there's "nothing there".  National Security specialist and counterinsurgency expert Malcolm Nance also reaffirmed at the same time how Roger Stone was the "bridge and link for that information" passed from the Trump campaign to Russian intelligence. Adding: "This is a critical,  critical indictment. They're saying they've identified the link.", i.e. in showing the bridge and coordination between Stone,  the Trump campaign, and the Russians.
Adding:
"This indictment is based not just on the hearsay or the testimony of others. Robert Mueller brings documentation to the table....And believe me there's also other information in the special counsel's office we don't know about especially from other members of the Trump team including Steve Bannon, Michael Flynn and others."

Let's recall here it was Trump's hired Toady Bill Barr who spewed out the claptrap that Mueller's report had basically exonerated Trump.  But if one reads Volume 1, the evidence is clear this is total misdirection and propaganda.

Mueller not only defined a conspiracy in the case of his indictment filed against 12 GRU agents in 2018, but made it public, E.g.
[Read the indictment here.]
Mueller  also - if you read part one of his report-  makes it clear Trump was involved in this  conspiracy.  As Harvard Law Professor Lawrence Tribe elegantly summed it up:
"What we have here is a situation where the Mueller report shows without any doubt that a hostile foreign power attacked the United States in this (2016) election.  That Donald Trump welcomed that attack, benefited from it and then - the last couple of years - tried to cover it up every possible way. "
Far from there being a "Russia hoax", every serious student of the investigations now knows the conspiracy between the Trump cabal
and Russkies was as real as a heart attack.   All  amply further born out in  the 966 -page Senate Intelligence Committee report, entitled :  “Volume 5: Counterintelligence Threats and Vulnerabilities,”
The report, in the words of one Bloomberg  analyst:  "leaves no doubt that an extensive network of Russian operatives with intelligence ties worked with Trump's operatives to torpedo Hillary Clinton's campaign four years ago."
As for the Steele dossier,  it has been a target of  the WSJ- FOX- Dotard Axis since it first surfaced.  Given its explosive content there is no wonder that axis has sought to heap incessant   derision upon it. But the probe into the Trump campaign originally was sparked by a separate matter that Steele never wrote about:  a tip from an Australian diplomat that a Trump campaign aide, George Papadopoulos, appeared to know Russia had obtained damaging emails on the Democrats. (Papadopoulos has pleaded guilty to lying to federal agents.)
The dossier itself is actually several memos, based on conversations with Russian sources, that were written between June and December of 2016.   Further, in retrospect nearly all of the dossier has been substantiated or confirmed.   This is 180 degrees different from the totally unsupported belief the 2020 election was fraudulent.  But leave it to little Holman to mix chalk and cheese to baffle his readers or mislead them with false analogy.
Some may ask: Is he really misleading anyone?  Ask yourself this: If Jenkins was really on the straight and narrow in his accounts would he outright deny Trump's disinfectant episode? Would he analogize insurrectionists and seditionists to "tourists"?  How about MAGA marauders carrying plastic zip ties to bind congressional personnel? All tourists?  Righto,  and Holman Jenkins Jr. is a real journalist too.
See Also:
Fascism
Sedition, Treason, Insurrection: Five Scenarios
by Bernard Weiner | January 11, 2021 - 6:29am | permalink 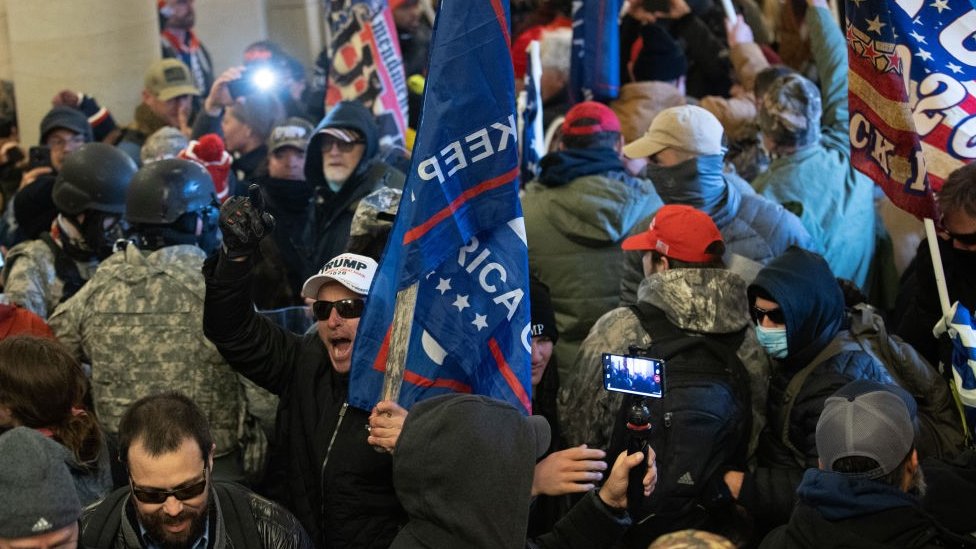 Peace & Justice
Violent Right Wing Forces Have Been Activated, It Requires Strategic Action To Stop Them 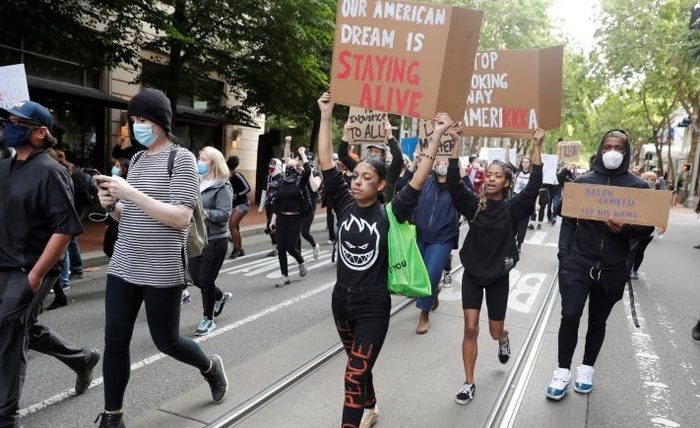 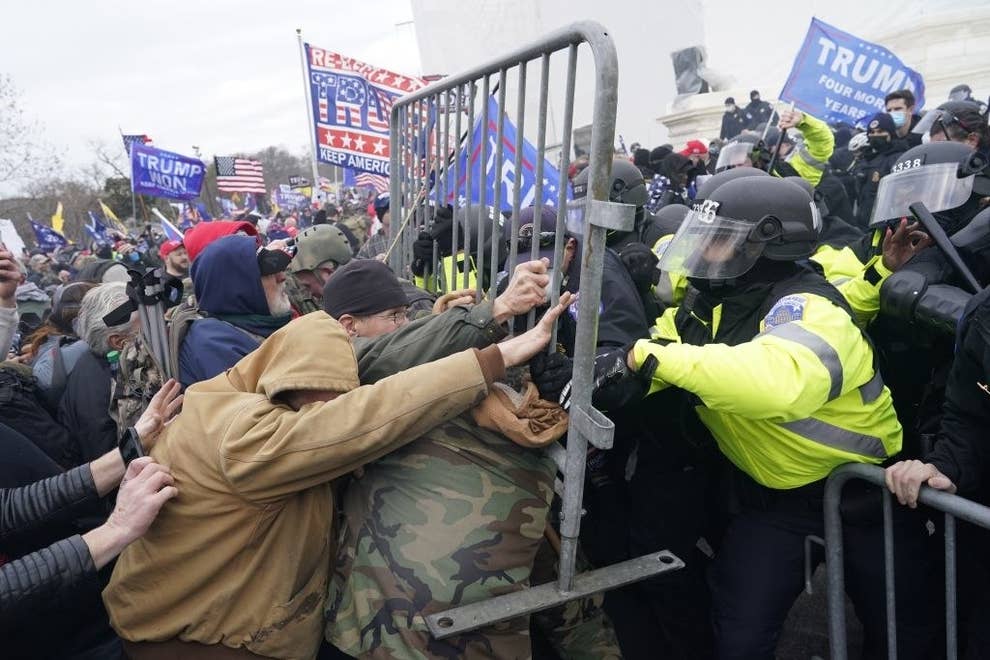 The mob of yahoos and cretins that broke into the United States capitol this week was not a spontaneous act of violence. Quite the contrary, it was a carefully planned criminal uprising designed to terrorize congress and prevent the election of president-elect Joe Biden.

It was clear orders had been given to the local security forces to largely disarm but accommodate the rioters, and allow them into the capitol buildings. By whom? Clearly by President Trump or his minions. There will probably be no written record. Trump, who grew up rubbing shoulders with gangsters and union thugs, certainly had learned the lesson taught by the late criminal lawyer Roy Cohen to always skirt the law and never leave a clear trail.